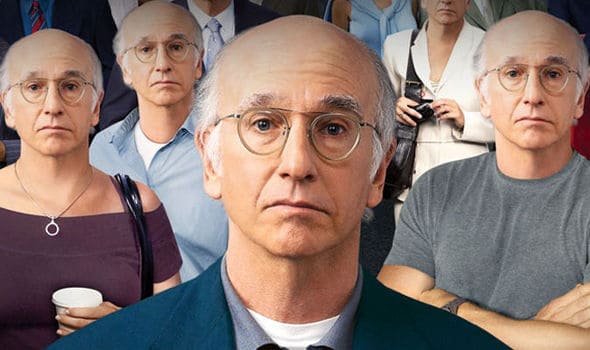 Larry David is the hero we need, but is he the hero we want? It would seem so given this trailer and the sentiment but one look at the show Curb Your Enthusiasm and you might get the impression that it’s a conditional need at best. He’s not a bad guy but sometimes he seems like the only guy available at times and the best that we can get. Maybe that’s why he’s so needed, he seems so readily available.

Larry David isn’t exactly the guy you would call on for much more than some help with a script or anything else mundane that you might need but then again that can be a heroic effort all on its own. Just the look on his face as it’s thrust into the sky suggests that he might be less than enthuses to really entertain the thought of answering the call. So yeah, it’s a conditional thing.

Some people might look at this and think it’s nothing but joke, which in some ways it is. But in all honesty it’s the little guys and those that get looked over that are the real heroes a lot of times. While this article is about to get a bit grandiose it’s very true that the backbone of any society are the people you don’t often look at don’t really think much about. They endure more on a regular basis than the people that climb to the top and are thereby deemed as the most important because of their fame and prestige. It’s hardly ever remembered why or how they got there, or the people that helped them in the first place.

The people that stay at the middle and the bottom get very little respect most times and very little recognition as they bolster the people on top. What a shock it would be if those “little people” suddenly stood aside and let the top dogs do everything for themselves. The prediction is that a lot of them would come tumbling down without someone to perform every little function of their lives. Some might be okay as they could probably fall back on their roots and acclimate to a day by day life, but others would be utterly and completely lost.

But the people beneath those top dogs, the real heroes of the world, don’t often want recognition and they don’t want to be called on all the time. They want to survive and they want to do well just like anyone. They want to know that what they’re doing makes a difference and that their efforts are actually helping others. That’s why Larry David is the hero we need right now, because he’s not perfect, he’s not the greatest person that ever lived, and he’s not out to make himself that way either. He’s a person doing what he can for himself so that he can do something for others. He’s the guy that represents what we all want and how to get it.

He’s the person we all identify as in one way or another.