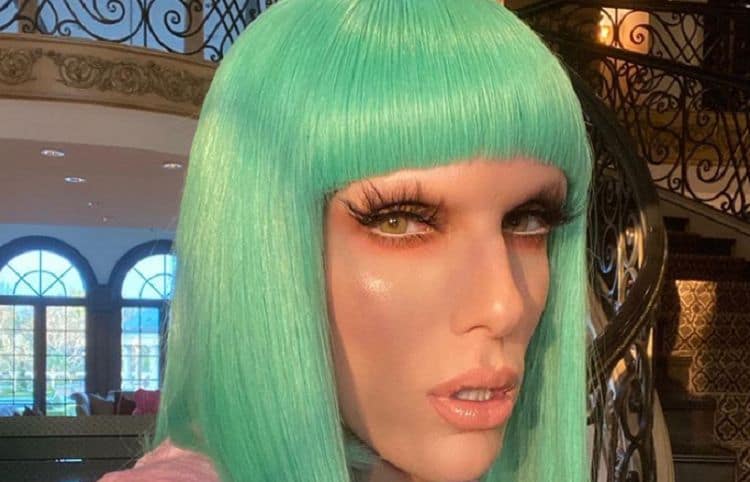 Love him or hate him, you almost certainly know people who subscribe to his YouTube channel and wear his makeup. Jeffree Star is one of a kind, and he’s not apologizing about it to anyone, except when he thinks he did something wrong, but we’ll get to that later. Whatever you think you know about this self-made Star, there’s plenty of T to go around, and we went digging through the Jeffree archives to bring some of the more surprising and less talked about facts to you. Here are ten things you didn’t know about Jeffree Star.

We know that a lot of first-time viewers and passing-fancy aficionados of his brand make that assumption. He has a live-in boyfriend, and yes, he’s openly said it’s been a long time since he went solo with a female. However, it’s time to get real about what century we’re living in. This openly sexual androgynous Jeffree is not going to take your label and wear it. Jeffree is attracted to whoever he wants to be regardless of their indoor-outdoor plumbing situation. If you don’t like it, then you can kiss his… millions of dollars, which he earned by being himself, and not who people tell other people he is.

Anyone who’s tattooed probably has a bad one somewhere, though Jeffree is famous for the incredible and very well done art that adorns his body. It’s part of his incredibly renowned look. While most of his art consists of some truly outstanding portraits, there was a time when he almost went and got a lousy tattoo on purpose. YouTube trends earlier this year included people going to the worst rated places for various things like makeup and nails. Jeffree, being himself, had to kick it up a notch. He decided to go to the worst-rated Tattoo parlor he could find in Houston. Spoiler, it didn’t work out, but not for the reason you think. Some security concerns came up during filming, and his security team warned him off because they felt that coming back could be dangerous to his health.

While some people bask in the idolatry of fans, Jeffree finds it kind of weird and uncomfortable that people feel that way about him. Moreover, the walking work of art will also tell you that you should not get tattoos because they’re ‘cool,’ because you need to be truly certain of what you want on your body. His personal canvas is mostly pictures of people he looks up to because that’s what Jeffree is sure he wants on his skin.

4. His Beauty Secret is…

Yes, Jeffree and his boyfriend Nathan Schwandt have their four adorably famous pomeranian pooches Diva, Diamond, Daddy, and Delicious. However, while Star loves the dogs, it’s Nathan who does most of the pup care since he once worked in a pet shop. That’s not so strange, but Jeffree once confessed (on camera) to Shane Dawson that the real beauty secret was dog spit. He mentions that dog’s licks have healing powers, and he’s happy to let them lick his face when the makeup comes off at night. We’re paraphrasing, of course, but you can see it for yourself in the Becoming Jeffree Star for a Day videos.

We know we just revealed Jeffree’s love for doggy kisses, but don’t make this weird. There are plenty of companies out there who are still testing on animals. That’s something makeup buyers don’t have control over, but as a makeup creator, Jeffree’s lines are a hundred percent cruelty-free and vegan. While he’s no a vegan himself, he does feel that it’s essential to provide eyeshadow that wasn’t smeared on some shaved lab rabbit before it gets to you. If that seems odd to you, it’s not. People want good cruelty free makeup, and if a designer or salesperson eats a burger, that really has nothing to do with what people want on their faces.

Fans love Star for his outspoken attitude, but sometimes he’s just on a whole other level. When it comes to haters, every star has them, but most of them won’t go out of their way to get products from companies who dislike them and make a whole feature about wearing them. Jeffree doesn’t care, and he made that video. Then again, it’s not always about massive drama. The Full Face of Brands That Hate Me video included wearing makeup he still owned at the time that came from brands that degraded him, but it was also about trying out some of the products he had ‘in the vault’ that he’d forgotten, ignored or blown past. Some of you might argue that the attitude shows that he does care what people think of him, and to you we say, of course, he does, he’s human. Jeffree has a delightfully divisive and wild way of coping with those feelings, which is a big part of why he’s so famous. Then again, he’s also incredibly talented.

We could give you ten facts that everyone else has already covered, like the time he feuded with Kat Von D. We could bring up the story everyone has shared about how he grew up stealing his mother’s eyeshadow. Moreover, we could even get into the time Jeffree, who is not proud of some parts of his past, made some racist comments, and years later apologized. You can hear about that stuff anywhere. However, we bet you didn’t know he’s a huge Elton John fan who has been to see Elton perform live more than once. Repeating tired tales and selling scandal isn’t what we do. We’re not here to TMZ the stories. Someone else already has that job, and they’re great at it.

8. Invested in What He Loves

It’s no secret that Star doesn’t drink or partake in illegals. However, he’s also an outspoken supporter and user of marijuana. Jeffree enjoys his Marry Jane so much he has industry ties, and he’s even invested in the growing industry (no pun intended). As a businessman who’s made millions, we have to say, it’s evident that Star knows a winning product when he sees one. Plenty of celebs are investing in the progressively more legal substance, and it’s done nothing but increase their bankrolls.

You may have noticed that everything in Jeffree Star’s world seems pink, and that’s certainly a common theme for him. However, he’s also obsessed with coral, which is a peachy or orangeish shade of pink, as opposed to the color Barbie wears. That might not make much difference to some people, but the makeup and fashion followers know that it’s an important distinction.

Anyone as vocal and unafraid to be rude as Jeffree might be the sort of person you expect to tear into a copycat. However, when thousands of fans asked him to review famous knockoffs from Bhad Bhabie, he took that challenge. When he tried the makeup on his skin, a lot of it was good news. While he didn’t love everything, he was complimentary and honest about what worked well and what he liked.

We’ll admit it, Jeffree is a lot of fun to watch. Good, bad, ugly or gorgeous, we’re not going to stop checking out his videos. Like most people, he’s not perfect, but he’s also not a monster. If that’s surprising to you, then we don’t know what to say other than the old cliched statement about how Stars are people too. What surprised you the most about Jeffree? Let us know in the comments below.