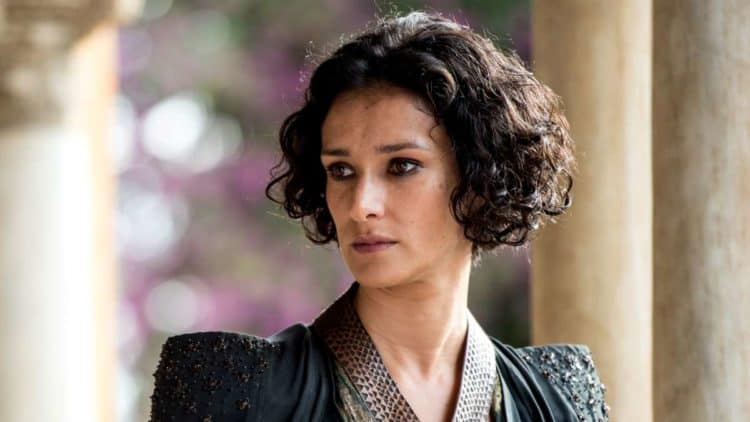 British actress Indira Varma may not have quite the same household name status as some of her fellow former Game of Thrones castmates, but over the past 3 decades, she’s quietly built a reputation as one of the most prolific and dependable stars of her generation. As well known for her powerful stage presence as she is for her TV roles, the talented method actress just seems to go from strength to strength. Find out more with these ten fast facts.

1. Her film debut was in Kama Sutra: A Tale of Love

Although Varma has enjoyed success on the big screen, it’s her TV appearances for which she’s best known… and for good reason. Since debuting as Manreet in a 1996 episode of Crucial Tales, the actress has featured in more than 40 TV shows, with some of her best-known work including The Canterbury Tales, Rome, Luther, Human Target, Game of Thrones, Paranoid, and Carnival Row.

Varma is clearly an actress who likes to mix things up- in addition to her prodigious output on TV, she’s also renowned as a serious stage talent, having appeared in numerous noteworthy productions. Some of her best-known performances have been as Bianca in Shakespeare’s Othello at the National Theatre, London (1997), Gila in One for the Road, by Harold Pinter, at the Lincoln Center for the Performing Arts in New York City (2001), Olivia in Shakespeare’s Twelfth Night with Donmar West End at Wyndham’s Theatre, London (2009), and Miss Cutts in The Hothouse by Harold Pinter in the Trafalgar Transformed season at Trafalgar Studios (2013).

4. She was told to change her name

While studying at RADA, a teacher suggested that Varma should change her name, implying that if she didn’t, she risked being typecast. Varma refused, telling the Guardian her immediate reaction on hearing the suggestion was to think “I’m going to forge a path for those with foreign names!” Although she stands by her decision, she does sometimes wonder just how much it’s narrowed her options. “I’ve always been torn by that decision,” she says. “I’m still in the business and I’m here at the Old Vic, but there have been moments where I’ve thought: bloody hell, I’ve missed out on that because actually, they liked the tape and then someone went, ‘Bit too Asian — not really what we’re looking for.’”

5. Her heart belongs to the theatre

Although most of us know her best by her TV roles, it’s to theatre that Varma’s heart belongs. “I feel that ultimately theatre has been my best friend,” she’s told Vogue. “Every night, you’re inventing and watching people who are a hundred times better and more experienced in doing what they do.”

6. She thinks the nicest actors are the ones who struggle

While Varma may have been fortunate enough to have landed a leading part straight after graduating drama school, she thinks the luckiest, and nicest actors, are those who have to work their way up the ladder. “If you don’t hit the big time within the first 10 years of your career, you’re lucky,” she tells The Stage. “Because you’re learning that it’s much harder to be a good actor with smaller roles. The people who’ve grafted, and chipped away, and keep going, are the nicest. The people who’ve been stars since they left drama school, there’s a complacency and a sense of entitlement about them, and you know what — it’s just luck, mate. Nobody can do it on their own.”

7. She has a special memento of her time on Game of Thrones

One of the series Varma is best known for is Game of Thrones, in which she starred as Ellaria. On her departure in 2017, she was given a special present to remind her of her time on the show. “I was given Ellaria’s little leather bracelet, which I love,” she’s recalled.” She doesn’t wear it in Season 7, but she’s worn it throughout. They’re all hand-hammered, hand-stamped, beautiful leather bracelets.”

8. Her parents discouraged her from acting

Varma was born in Bath, Somerset in 1973, the daughter of an Indian father and a Swiss mother. Although she fell in love with performing at a young age (recalling to the Guardian) “There’s something so pure about being able to mess about, where there are no expectations”), her parents weren’t at all keen on their only daughter throwing in her academic studies for drama. “He’d (her father) just throw at me, ‘You should be a doctor,’ she says. “Utterly ludicrous. I was crap at science.”

9. Dame Maggie Smith is her icon

If you’re going to look to other actors for inspiration, you may as well pick the best. In Varma’s case, she most certainly has. As she tells Fabric Magazine, one of the first actresses who inspired her to act, and who remains an inspiration all these years late, is acting royalty and national treasure, Dame Maggie Smith. “When I was growing up in Bath, I remember seeing her in Lettice and Lovage and thinking that it was just the most amazing performance,” she recalls. “It totally captured my imagination. And she is still at it. And that, to me, is remarkable.”

10. She’s married to a fellow actor

Varma isn’t the only actor in the family: while working on stage, Varma met fellow actor Colin Tierney. The pair are now married and reside in Hornsey, North London, with their daughter, Evelyn.