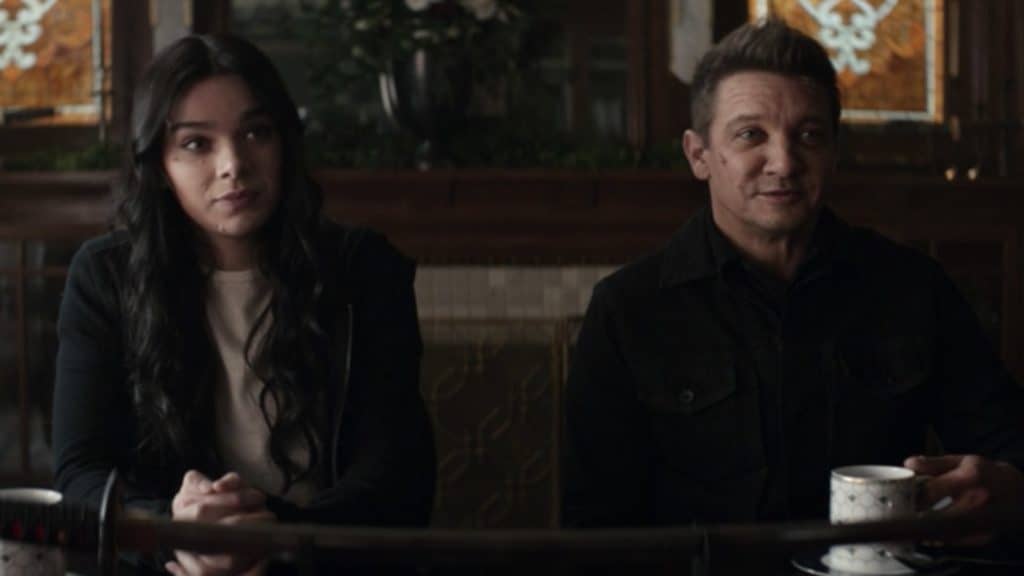 The Hawkeye story has been mostly about Kate Bishop’s ascent to superhero status, but at the base, there’s still the need to talk about the least-respected Avenger and the life that he’s trying to close the final chapter on at this time. After being held at swordpoint, his own sword, in fact, Clint has a brief sit-down with Kate, her mother, and her mother’s fiance, who had him covered, or at least it appears that way. A lot of people are bound to be clamoring about the Swordsman and the old connection that he and Clint shared in the comics, but it doesn’t appear that this was the direction the MCU was plotting at the moment. Instead, we managed to get a very tense and cheesy moment that occurred before Clint was escorted to the elevator by Eleanor, who managed to bring up the painful reminder of Natasha in a way that might have made some folks cringe. Not long after that, we see Eleanor, Jack, and Kate in the same room for a very cheesy moment that felt as though it was meant to disarm but only increased the amount of cringe.

Clint, in the meantime, made his way back to the apartment that Kate allowed him to stay in and proceeded to take it easy, calling his wife Laura to make it known that he couldn’t leave until he was certain that Kate was okay and everything was settled. The issue of the Rolex that was stolen at the black market auction came up again, yet the owner and purpose of the watch have yet to be fully revealed. One can only guess that many folks are already making their own theories or following what they can to discover what it’s all about. But given that it came from the previous Avenger’s Tower, there’s a good bet that it’s going to connect to the movies or be important no matter what.

It was nice to see Kate and Clint enjoy a bit of time spent wearing ugly sweaters, watching Christmas movies, and then of course ruining the moment when Kate asked Clint about the most impressive shot he’d ever taken. That, in turn, brought up the memory that Clint had of going after Natasha for the first time, and not taking the shot. There’s obviously more to this and more to Clint’s background as he manages to reveal some of his past, but not much. Plus, the fact that he admits to being a weapon and not much more is kind of a sad testament to his life since it indicates that Clint has only ever done what he was directed to do, and before becoming an Avenger he was a SHIELD asset that was used for one thing, eliminating one threat or another. This fact shouldn’t be lost on anyone since despite being one of the only Avengers without superpowers, Clint is still one of the deadliest individuals on the team considering his skill set and the amount of experience that goes with it. For all the respect he doesn’t get it doesn’t appear that Clint worries about it since he knows that what he does isn’t exactly worth respecting given that he’s taken the lives of many people over the course of his career. The funny thing about this is that in the comics, the Avengers had a code to never kill anyone on purpose, and at one point Hawkeye was actually kicked off the team for killing someone by accident.

The reason this is funny is that the purpose of giving him such skills, in the MCU, was to make him a cold and efficient killer that could handle one job after another that others couldn’t handle. It’s a bold statement, but Natasha and Clint have essentially been like the John Wick of the MCU, but with far less respect. Upon going after the Rolex though it instantly became apparent that the stakes had been raised when Kate was ambushed by Echo after she’d tripped two silent alarms that issued a strobe-light effect, while Clint was ambushed by a masked assailant that he recognized eventually due to her fighting skills and attack methods. People have been waiting for this to happen, and the fact that spoilers, Yelena Belova has entered the fray shouldn’t come as a huge surprise to anyone.

It’s kind of obvious that Yelena and Echo combined would be too much for Clint to take down, but the fact is that both women, even when working against each other as it was seen, are more than Clint wants to handle, even with Kate around. His final words before the credits roll are to tell her that it’s over, that a Black Widow has been hired and that things just got serious. For Kate, who’s confident but not experienced, this should be a giant red flag that she’s stepped into something that she’s not ready for, but as anyone can guess, that’s not going to happen. As of now, it’s fair to say that a lot of people can’t wait for next week’s episode.