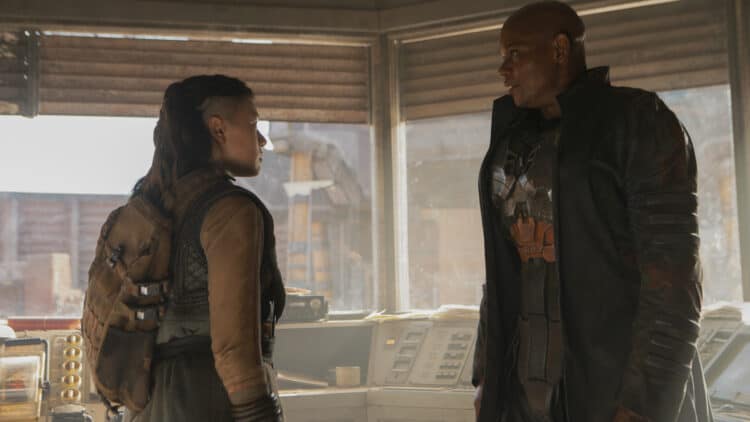 More and more it’s feeling as though Halo should have been adapted for the big screen first, before being taken on by Paramount+ as one of their more entertaining properties. More than a few fans are scratching their heads while trying to decide which way to aim their less than congratulatory opinions at this episode, and several are taking it further to state that ‘Inheritance’ was a few episodes too late to be entertaining enough to keep things moving in the desired direction. The worst part is that they’re not entirely wrong since this episode does revisit an idea that should have been pushed and finished earlier and at this point feels like it’s being given as a recalcitrant apology to the fans that were hoping to see the show mirror the video games a little more. While shaking my head and rolling my eyes I can’t but wonder why anyone is thinking that a video game movie is going to follow the video game these days. It’s essentially the same thing with comic books, there might be enough to recognize the relationship, but the directors are going to do what they feel is right, not what the fans want.

To be fair, fan service can be a positive or a negative thing depending on how close the stories are going to be. There is a great deal of sense in keeping things as close to the source material as possible, but at the same time, trying to tell the same exact story without any deviations becomes a bit redundant. Of course, taking a completely new course is bound to stoke the ire of the fans as well. Pleasing everyone is impossible, as it’s already been proven many times over. But Kwan Ha’s story does feel as though it should have been pushed to this point before now, if only to give more time to Master Chief, Halsey, and the main characters of the show.

Her search for those who guided her father to his purpose feels less like a young woman seeking to find her path than a young woman who is still incredibly naive and needs a great deal of teaching before she’s even worth trusting with the charge she’s given as a protector. Her petulant manner is kind of a turn-off when it comes to seeing her as a viable character, and giving her fate over to a desert-dwelling tribe of women almost screams of a slightly muted form of empowerment. Things don’t really manage to get that interesting until she returns to the site where her people were massacred to do…something. The vague details of this episode don’t help that much, to be honest, but once Kwan Ha and Soren meet up again it does start to get interesting…with only a short amount of the episode left to go. Still, her knowledge of the station, and the fact that she’s a little more self-assured, do help to give the audience hope that Ha might actually be developing into a useful character. During the firefight with Vinsher’s forces (yes, he’s still kicking around and wants to eliminate Ha), one has to exercise a great deal of patience once again as the plot armor thickens, allowing Ha and Soren to take on Vinsher’s overwhelming force, who must be new to the job since otherwise, it feels likely that the duo should be taken out without too much trouble.

True, Soren is a capable fighter and trained with the Spartans for a while, but unlike Master Chief, he didn’t exactly keep up on his training since he became a pirate and smuggler living the good life. Perhaps old habits don’t die in this case, but it would also appear that Vinsher’s people are little more than untrained thugs with guns since killing them off is a bit too easy. Master Chief would stroll through them, that much feels obvious, but Soren should have had at least a little trouble. He did get tagged a couple of times, but never with the type of force or shot that would have put him down. Some might chalk this up to him being insanely tough, but in the grand scheme of things, it was a little too convenient.

There is one hope at the end of this episode, and that’s the idea that Kwan’s story has been sufficiently told to usher in the return of Master Chief to action as the finale is now only two episodes away. The decision to move away from the story of Master Chief, Dr. Halsey and the fight against the Covenant was an odd one, as many people tend to feel about this episode, but at the very least it would appear as though this was meant to mop up the idea of where Kwan and Soren fit in the story, at least for now, before moving back to the heart of the Halo series.