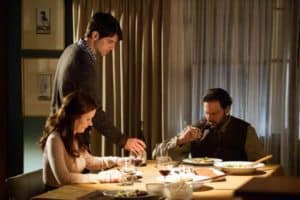 The most frustrating episode of television is one that has all the elements to be great yet doesn’t quite gel. You see the potential on the screen and keep waiting for that moment when it all clicks, but there’s something about it that keeps it from feeling complete. It could be something relatively minor that undoes its quality, like a momentary writing lapse or a misused character, but it tends to come down to execution. Put simply, the episode doesn’t get pieced together properly, typically leaving things a bit uneven or lacking compared to what they could have been. After a string of improvement, “Leave It to Beavers” became that type of episode for Grimm.

But there’s nothing that obvious that took Grimm out at the knees, not really. Though the Juliette/Monroe/Nick subplot was a little ham-handed and too short to have any impact, the only thing that I had in my notes that got to me was the attempts at humor, all of which fell flat. Grimm’s not too maladroit at handling humor, mainly due to Monroe, but it’s had many an episode that had to overcome mostly corny, too self-aware one liners. I think that having humor on a show as murky and (relatively) dark as Grimm is a good idea; it provides a way to keep those elements in the show while making an episode easier to watch, giving the characters the opportunity to not take themselves as seriously. Plus, you can learn a lot about someone by observing their sense-of-humor. But there were at least four or five hack-y moments in “Leave It to Beavers” that made me groan. Loudly. Like your out-of-touch uncle telling you his latest “zinger”, almost daring you not to laugh. As much good as good humor can do for a series, bad humor can do as much bad; in the case of Grimm, it really takes me out of a scene, as it feels very forced and dry. Nick’s final note (and present) to the reaper boss is about the level of humor that Grimm can execute pretty well – it embraces the darkness with a giant smirk. Not terrible lines about “losing your head” (after cutting off both reaper heads) or “being buried in your work” (later holding his head while cement pouring in around it). Grimm may have improved in the last few weeks, but the humor issue is one that dates back to the pilot and is something that I thought the show had outgrown.

Otherwise, I quite enjoyed “Leave It to Beavers”, as it again expanded the Wesen world and introduced the reapers. Particularly, it gave us another look at the eisbiber and the creature code of conduct, as they had a vote on whether or not one of their own should testify against their natural predator. My favorite aspect of the 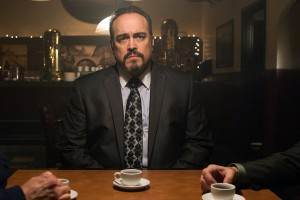 past few episodes is the fact that we’ve been immersed in Wesen politics and the dynamic of Nick’s other life, since most of the first 2/3 of the season was a little vague about that type of information. “Leave It to Beavers” gave us a first look at a gathering purely of eisbiber, something minor but something that acknowledges the communities within the entire Wesen umbrella. You’d think that having Nick be summoned to a meeting at the lodge could be a bit shoehorn-y, but Grimm tied back to the first holes in the dam between Detective Burkhardt’s two lives in the refrigerator repairman named Bud and his friend John. Now that the show is trying to become a bit more serial, I’m more appreciative of the open threads they have, as they allow Nick to have “ins” to the creature world that he wouldn’t have otherwise. Prior to episodes like tonight, they had merely been a sign that the show was willing to stray from the typical procedural open-and-shut formula, but if Grimm can take advantage of the creatures still “out in the wild”, that could open up the show even more.

The introduction of the reapers, apparently based in Germany, offered consequence and danger for Nick Burkhardt, some of the first real danger of the series. Of course, he’s had fights and shootouts, but the battle scenes on Grimm are so brief that you don’t really have time to worry about injury. This type of danger comes in the form of people engineered and trained to take people like him out, a feat they’ve been doing for years and centuries. It’s not going away after somebody’s hauled off in handcuffs and unless Nick finds a way to get every reaper in a room and blow them up, it’s not going away. Thus far in Grimm, Nick has pretty much had free reign around Portland, the time, resources, and lack of opposition needed to perfect his abilities and gain confidence in the new Nick Burkhardt. Now, it’s time to take on a bigger threat than a lone creature or a couple of knuckleheads that could’ve been caught blindfolded. The reapers may not have stuck around longer, but there’s more where that came from and since Nick took them out (and taunted the leader), they’re bound to be more upset and eager to strike than ever before.

With a little Chekhov’s Crossbow and a trip to Germany, Grimm opened up its doors to a world outside of Portland, Oregon. The scenery and visuals of Grimm have been some of its strongest elements, but the lush greens and creepy lighting need new, more venomous characters stopping by and I think Grimm has the capability to up the stakes for all involved. In “Leave It to Beavers”, the mob gets involved, along with the higher-ups in the Wesen world, but the more people know about Nick Burkhardt, the more will try to take him out. That’s why the friendship between him and Bud/the eisbibers is important; Monroe is fun and all, but if major things are about to go down and the imminent war comes to fruition, Nick’s going to need allies and, more importantly, man power. Granted, the eisbiber is far down the Wesen food chain, but it’s a start and I think it can only go up from here. Both for Grimm and for Detective/Grimm Nick Burkhardt.

Thoughts, Quotes, & Observations:
-“I told you to meet me, not eat me.”
-“I should probably shower first, I’m a little cement-y.”
-The only negative I have about the reaper fight is that Nick turned into a ninja during it. They both swung at him at the same time and he did this move that looked very video game. A little unrealistic.
-Props, though, for the use of the word exigent.
-Another former Angel producer will be joining Grimm for season 2.
-Here’s a little information about an art exhibit focusing on the Grimm fairy tales.
-Next week on Grimm: Nick and Hank investigate a missing persons case related to a Ponzi scheme, while Juliette looks into the death of Nick’s parents.