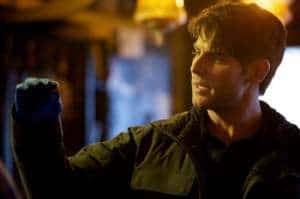 Grimm can get a little frustrating with its complacency in format. It may have its hands tied regarding the format it operates under, but there have been times where edging away from the procedural side of its identity could have benefited an episode greatly. Of course, there has been a little tinkering here and there, having the police work take more of a focus one week, spending several episodes on Nick embracing his Grimm abilities, and focusing a subplot on Monroe’s personal life, but for the most part, it’s been the same ol’. While knowing what I’m going to get out of a Grimm episode can make for good TV comfort food, a part of me wishes they could play around a little more with their structure.

Even though it’s not a perfect episode, “Happily Ever Aftermath” gets major props for trying something different. Giving us a break from the sometimes sloggy detective work, it shined the spotlight more on the Monster of the Week, a creepy bat-like Wesen called a murcielago, one of the first times Grimm has done that. It made for a nice change to the rhythm of a typical episode and was just enough of a stylistic wiggle to be noticeably different yet not enough to take you out of the action. It helped, too, that the case was a fairly interesting reinterpretation of Cinderella, funneled through a Ponzi scheme and a pretty decent twist. Though the financial angle reeked of “let’s do something socially relevant but not too much”, having already been exhausted by a recent season of Damages and the back half of Ringer, the story itself was pretty compelling, moreso after it got going. Especially the concept that Spencer had been assigned to keep Lucinda in control of herself and her ability, another angle on what it means to be a Wesen. There have been creatures that hated themselves, creatures that reveled in the power, and creatures that used said power for monetary gain, but I don’t think there’s been this type of dynamic played out on Grimm before, another universe expanding concept that widens the idea of a Wesen that much more.

That extra time also led to the ending packing kind of a punch, with Spencer putting Lucinda down for her own good and Lucinda lashing out one final time. I don’t have to know every Wesen that Nick and Monroe come across; Grimm is about Nick catching the creatures and all, but something like this complicates the matter. Not all Wesen are evil and not all Wesen can control themselves, so the more the show highlights (and re-highlights) this fact, the more dimension the cases will have and the more entertaining they’ll be.

I’m a little more conflicted about the B-story of “Happily Ever Aftermath”. It gave Juliette something to do and for that, it gets very good marks. Of all the characters on Grimm, Juliette is the closest to breaking through 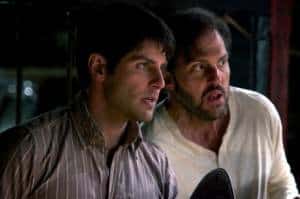 and becoming something fun/interesting, but it’s felt like they pull back on her once she gets too close to finding out the truth about Nick. Here, she became less typical genre show nagging girlfriend and more important part of the game, doing the research and getting Nick the additional information about the death of his parents. It may not have been much in the way of action or anything, but it’s a promising development and a nice way to get her involved in the episode. Every time that she’s either been about to find out about Nick (e.g. the dinner last week) or pushed her narrative forward, e.g. her rejection of his proposal, it’s either been forgotten about or cut short, so hopefully her position on the show will improve from here on out.

But you promise us an impending war one week and the next, no mention of it? As much as I liked Nick being haunted by the events of “Three Coins in a Fuchsbau” and the revelation of a fourth murder suspect, not even a mention of war? And the reapers? That seems like an awfully big bomb to drop and immediately back away from, particularly after several weeks of building toward it. I understand the laws of television demand that the biggest revelations and most exciting events be corralled in the final couple of episodes per season, but this kind of broke the narrative flow that had developed. I have less of a problem with the actual episode itself than I do with the order in which it came in the season; had this popped up before the war angle began, closer to “Three Coins”, I think it could have helped its cause tremendously. Unless something was gained in the episode, for example Renard’s growing suspicion of Nick or Hank getting exposed to a Wesen’s ability for the first time, that comes into play later, it’ll make this look more like a filler episode. Which is a shame, because it had a lot of good stuff to it.

Grimm went a little left in “Happily Ever Aftermath” and while it didn’t completely deliver, veering away from the events of last week and giving a fairly tired set-up to an intriguing case, it made up for it in ambition, the use of Juliette, and the callback to earlier episodes. I don’t expect Grimm to suddenly become something other than a supernatural procedural, but when you’re that bound to a specific structure, episodes like this help to expand what it can do and keep the show fresher. Every aspect of Grimm can make for a fairly good episode when executed well and given the spotlight, but relying on the same ratios of content and the same beats every week could make for a higher burn factor. There’s only so many times that it can do the same thing in the same way and it be interesting, so something like “Happily Ever Aftermath” gives Grimm a little more room to try new things and keep us on our toes. If that kind of growth means taking a flawed-but-pretty-decent episode every now and then, so be it.

Thoughts, Quotes, & Observations:
-“I should tell you my nightmares more often.”
-Even though I liked having Lucinda be the real killer, why didn’t she expose herself to Nick like Spencer did? Was her issue not one of control but one of malice, intent, and manipulation?
-A lot of things/people I liked in this episode: the brother from Jane By Design, a Kimbra song, and the shot of Mavis’s house in daylight fading into darkness, especially.
-What have been the favorite episodes this season of each cast member?
-Here’s a piece on the Grimm make-up FX artist.
-NBC may premiere season two in August. Good idea or bad idea?
-Next week on Grimm: Nick comes across a Wesen that can’t change back into human form and Hank sees something that he shouldn’t.