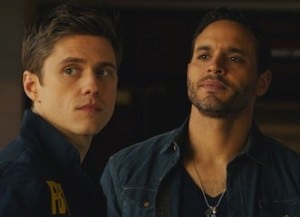 The show is inspired by true events, and revolves around a group of agents from the FBI, US Customs and the DEA who are all housed and operating under one roof in southern California — ‘Graceland.’  But with the exception of a once-owner’s love of Elvis, the show has absolutely nothing to do with The King.

We arrive at the beach house with new agent Mike Warren immediately after his graduation with the FBI at Quantico.  Unfortunately for Mike, his training officer Paul Briggs is none too enthusiastic about his arrival, to the point of sending Johnny (another FBI agent) to the airport to retrieve the rookie.  While not overly ‘green,’ as far as new officers and agents go in television shows, Mike does have his moment of naÃ¯vetÃ© when he actually listens to the instruction to wait at baggage claim for his ride…for two hours.

Mike seems rather unfit for So Cal life, as Johnny discovers after eventually picking him up from the airport — Mike doesn’t surf, brought no shorts or sunscreen, and is generally far too buttoned up for Graceland.  But Johnny does as he should and attempts to introduce Mike to Graceland as best as possible, even showing him the chore wheel.  Johnny also tells Mike the story of what happened to Donny; another agent who no longer resides at Graceland after an attempted drug bust (seen in the opening moments of the show) went sour.  Mike has apparently been assigned to Donny’s room — a fact that Donny’s once-partner Lauren is noticeably unhappy about.  Her warning for Mike to not unpack is the first clue.

The divide between the Graceland crew and Mike becomes more pronounced when Johnny and Briggs begin to teach Mike how to surf — he’s got to fit in with the crowd, doesn’t he? — and Mike notes how Briggs’ reputation at Quantico just doesn’t seem to meld with his lifestyle at Graceland.  Mike expected a far more suit-and-tie guy, more buttoned down, but according to Johnny, though Briggs used to be exactly that, he took a leave of absence, and came back with this new Zen, relaxed persona.

Of course, up until this point the pilot episode of Graceland was very introductory.  But the plot thickens when Lauren learns about a connection to the cartel that shot Donny.  Obviously, she wants revenge for what happened to her partner, but Briggs makes the decision to send Mike in to make the deal with drug dealer Felix Oriyo.  When in for the operation, Mike swiftly managed his tricky cover story with Felix, though later, after both Felix and Mike are arrested officers manage to walk the two into each other, effectively ruining the cover story.

This however becomes far less important to the story when a mysterious man comes to bail Felix out of jail — not his lawyer, but a man involved in the Russian cartel out to eliminate Donny — and informs him that his family is “staying with him.”  Felix, in his panic names Mike as his brother in law, ensuring that the Russians will ask him for a “favor” to keep Felix from talking.

Working with Briggs and the rest of the Graceland company, Mike goes through extensive make-up and background work to successfully play the part of Felix’s junkie brother-in-law, and is in fact, sent in to work for the Russians.

The team has to rush to establish Mike’s phony criminal record while he plays the part on his end, but when things start to take a dangerous turn — the Russians seeming to not trust Mike — Briggs rushes in to try and prevent losing Felix’s family.

Sure enough, the Russians take Mike to a house, instructing him to kill the man inside.  And just Mike’s luck, the man he is supposed to kill is none other than Donny, and the Russians have taken him to the government safe house.  The two are forced to work together, though Donny at first doesn’t believe Mike is who he says he is — until he holds up the spare key to Graceland — to make it appear that Donny was actually shot.  Just when it looks like the Russians are going to off Mike as well after he returns from his mission, Briggs rides up and shoots the cartel down.

The Graceland residents tie the episode up with a small party on the beach, and for a few moments, it seems as if Mike has been welcomed into the fray to work with the agents as one of them.  But when Mike receives a phone call from FBI Director Campbell, the truth behind his presence at Graceland is revealed.

He is on assignment to investigate agent Paul Briggs.

As far as cop shows go, I found that Graceland boasts an interesting change.  The characters are of course well written, as no lesser quality would be broadcast on USA, but I found that they all tip the line between “should I like this character or not?”  in a sense that only makes me want to keep watching the show.

The pilot was of course heavy on Mike’s character, and I have to say that Aaron Tveit plays the rookie part quite well, though not to the point that the character is so new that he can’t be perceived as competent.  I’m interested in seeing how Tveit pulls off the character now that I know what his true purpose at Graceland is, as well as how the other characters’ will be fleshed out.

It was also great to see that the show is embracing a more friendly relationship among the residents of Graceland.  The banter and wise cracks between the guys added some depth to characters who no doubt deal with some pretty serious work, and there’s very clearly more than just a partner relationship between Lauren and Donny that I wonder if we’ll ever see more of.

I’m sure, knowing that the show comes from White Collar‘s Jeff Eastin, the rest of the season will blend contained storytelling with larger arcs, and given the fact that the show already seems to have quite the internet fan-base, I predict it will do pretty well in its summer run.

What did you think of the first episode if Graceland?