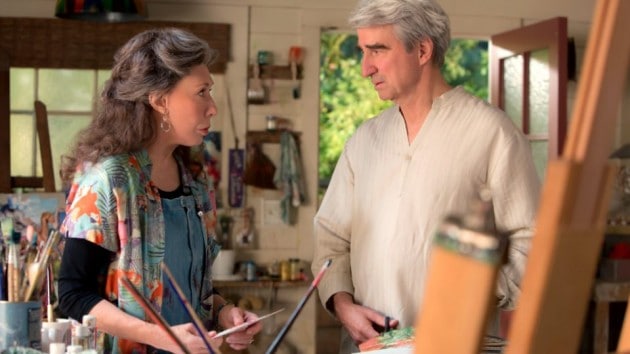 Things are moving along for all of the characters on Grace and Frankie. Robert and Sol are preparing for their upcoming wedding, Grace has entered into a relationship with Guy, Frankie is looking ahead to a possible romance with Jacob the yam man, and the children are all continuing on with their lives. This character progression looks to continue with “The Invitation.”

The episode opens with Grace and Frankie receiving an invitation to Robert and Sol’s wedding. Neither of the women know how to react to the real knowledge that this is actually happening, and Robert and Sol deal with seeing what people think as the RSVP cards begin coming in. Brianna comes over to the beach house for a short visit, and she walks in on Frankie cooking up her personal lubricant. As disgusted as she is at the thought of her mother being intimate, she is forced to consider the idea that it may be a product to look into for her company. She exits, repulsed, leaving Grace and Frankie to discuss their respective relationships with their ex-husbands.

At a meeting for the company, Brianna introduces her mother’s idea when nobody else has anything of use. The rest of the team doesn’t quite agree with the product, but Brianna manages to convince them to get behind it. Meanwhile, Grace decides that now is the time to tell Robert about her relationship with Guy. The reveal is as awkward for Robert, as would be expected, giving Grace a lot of pride. Frankie also takes this time to tell Sol that the two of them need to set boundaries on their relationship now that the marriage is over. Unfortunately, this meeting with Sol leads to Frankie forgetting her planned lunch with Jacob. She ends up having to reschedule, much to his dismay.

Later, Robert drops in on Guy and Grace during their golf date. It’s clear that Robert is there just to spite Grace, and Guy reveals that he was asked to officiate over the wedding. Brianna, meanwhile, orders her creative team to test out the new product themselves. For her part, she ends up testing it out with Barry, an accountant at the company, after he comes onto her during a conversation. Back at the house, Grace finally comes clean to Guy about all the things that she’s been pretending to like for him, and she also lets him know how uncomfortable she is with Guy officiating her ex-husband’s wedding. The exchange leads to the new couple expressing that they really do like each other. Frankie and Sol also have a heart-to-heart about the wedding, and they finally decide that it’s time to do “divorce things.” She also accidentally stands Jacob up again because of Sol, and he tells her to let him know once she figures everything out.

Robert and Sol’s upcoming wedding and the impending divorce seem to be the driving forces throughout the remainder of the first season of Grace and Frankie, but it’s clear through “The Invitation” that character progression and secondary storylines won’t be sacrificed because of this stronger focus. Grace and Frankie has really become a very charming series, and I can’t wait to see how things begin to wrap up in the final act of the season.