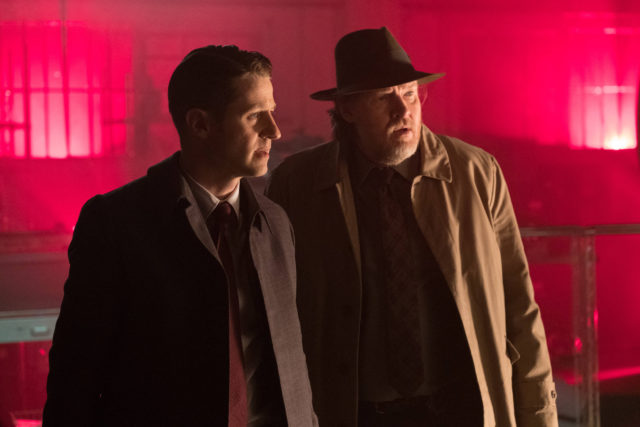 Gotham has had its ups and downs, certainly, but lately there have mostly been ups. Though I can always find quibbles here and there, the narrative has largely been dramatic, exciting, and altogether impressive. When a show can find ways to be exciting and interesting, and still maintain their plot-driven build up, that’s a promising thing. Especially when that show has been renewed for fourth season (like Gotham).

This week on Gotham: Gordon gets in deeper with the Court of Owls, trying to figure out their plan for Gotham, and enlists Bullock and Lucius to help him. Lee wants to investigate Frank Gordon’s murder, convinced that Jim committed it. Bruce continues his training with the Shaman. Ivy works hard to revive Selina, who has been seriously injured by her fall. Penguin seeks Gordon’s help in contacting the Court of Owls as he attempts to hunt down Nygma. Hugo Strange extracts Alice Tetch’s virus from Captain Barnes, at the Court’s behest.

Obviously, there was a lot of plot to get through in this episode, but none of it felt glossed over. All of the included characters felt organic and helped the plot along nicely. Most shows can get bogged down when they include a lot of characters, but all of this felt very organic and natural. Perhaps a different episode could have dealt with Selina’s awakening and Ivy’s journey there, but by and large all of the pieces fit the primary, Court of Owls controlled puzzle.

The one part I didn’t like was Lee acting like a lunatic because she’s mad and hurt by Jim. But, I also wish that they would’ve just told her the truth about what he was doing and what happened to his uncle. Lying is a huge pet peeve I have in TV shows because it’s much more compelling and interesting to deal with the truth than trying to manufacture drama with a lie. Because of the lie, here is how I predict this plot will play out. Catherine has now found out that Jim has betrayed her, so she seeks out the names he wrote down in their little immunity book. There’s only one name: Leslie Thompkins. So Lee, completely in the dark about what’s happening, will get caught in the cross hairs of this all out war for Gotham. Wouldn’t it be better to have her know about it before hand? I would think so, but I reserve the right to be wrong if things play out OK. I want to see them succeed, so I will be rooting for it, but lies for the sake of drama are generally bad ideas.

Overall, this was a fantastic and exciting episode. Though I had some issues with the way it was executed, I’m still as excited as ever for what’s to come.

Gordon goes in deeper to the Court of Owls plot, and Penguin looks for Nygma on this week’s compelling episode of Gotham.