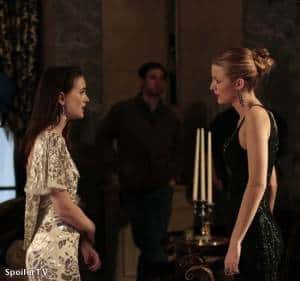 Was anyone else screaming through the screen at Serena to not intervene with Raina’s interview with Blair? I thought I wasn’t alone.

Last night’s Gossip Girl should’ve been called The Valentine’s Day Massacre, because that’s exactly what went down for half of the principle cast.

First up, let’s talk Dair and Chair. Despite my earlier observations, it seems that Blair felt that since she’s moving up the corporate ladder at W. that it was time to rekindle her relationship with Chuck. In other words, Blair foolishly thought Chuck would wait while she achieved her goal of independence and came out looking like a fool in the end, because Chuck seriously was digging Raina and didn’t even notice Blair at the party. At all. But even if Chuck did notice, would he forgive her for even trying to plot to break apart his relationship with Raina? It would have been the Eva fiasco from earlier this season all over again…

While Blair has improved in the realm of maturity in these last few episodes, her naivetÃ¨ could be mistaken for her acute conceited nature to even think Chuck would be interested in someone else besides her. It’s mistakes like these that Blair shouldn’t set herself up for, but hopefully Dan Humphrey will be there to steer her away from such foolish oversights.

Dan and Blair’s little side story was craftly done, making it seem like the (inevitable) union of Dair could possibly be either a hiatus cliffhanger or a season ending cliffhanger. Either way, it will be a welcome shake-up to the dynamic of the show. How cool was it that the two of them sat and watched “Rosemary’s Baby” over the phone? Priceless.

On the flip side, there is Chuck and his constant inability to decipher love/family from business, which sent Raina running for the hills. Russell Thorpe knew this was a pet peeve of Raina’s and planted the seed for Chuck to make another foolhardy move and further jeopardize the rescue of his company. It’s like the anniversary of Chuck’s sacrifice of Blair for Bass Industries being relived all over again and you would think Chuck would’ve learned how to play his hand this time around, but alas, this is Gossip Girl, where the characters do not take not of their (or each other’s) past mistakes. Chuck now stands alone with the card key Captain Archibald left him, but will he finally get it right this time? And will he be able to show Raina that he is in fact capable of love? Or will he go after Blair again?

Serena’s issues with Ben this week were just blah. I give these two about 2-3 more hiccups in their relationship before Ben bids Serena adieu forever. It’s about time for her to catch someone else’s eye by now.

And why is Damian still in the picture? While his reappeareance (after he was outed as a drug dealer to his father last week) was a bit jarring, Damian took on The Omen connection to his name and became menacing last night. Wonder what the hell he has in store for Eric and the denizens of the Upper East Side? It can’t be too drastic… right?

Well, what did you guys think? Should there be a Dair union or a Chair reunion? State your reasons below!