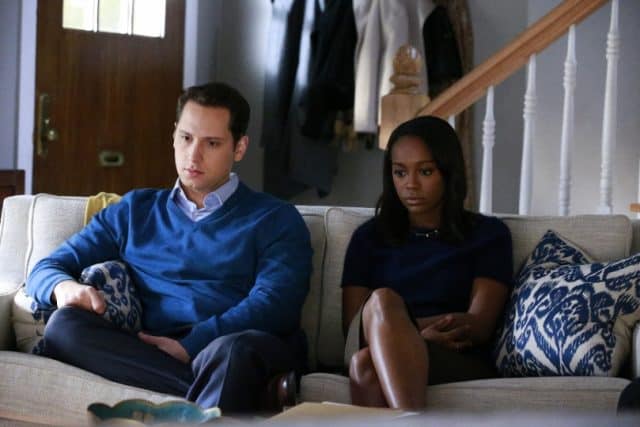 The dramatic tension on How to Get Away with Murder has been wonderful since the show’s reveal that Wes was killed, and the back half of this season has continued to give us more and more intrigue and mystery as it’s gone on. After the reveals last week, let’s take a look at the new episode, “It’s War.”

After Annalise is finally released on bail, she meets with her sometimes-beau, Nate, who informs her about the discovery of his signature on the transfer order for Wes’ body. They both understand that this is very obviously the DA’s doing, but there’s not really anything that they can do at the moment. It’s a reminder of that particular mystery, and it again shows me how happy I am about Nate having a renewed focus for this show. Annalise also returns to her students for the first time since the fire, and, as expected, they aren’t too thrilled with her. They also really want to look into whether or not the Mahoney family was involved (especially after hearing that they’re the ones responsible for the accident that killed her own child), but Annalise is very uninterested in that happening. Of course, Laurel isn’t happy about this, but she brushes it off for now and moves on. We find out, though, that Laurel takes matters into her own hands and hires a private investigator to look into the matter, and I love seeing Laurel being so proactive now. It’s a great evolution for the character, and I’m looking forward to seeing how things progress with her.

Over at Oliver’s, he finds out that Annalise called Connor on that terrible night before the fire, but Connor says that he just got a voicemail that he didn’t see until the next morning. This doesn’t sit too well with Asher and Michaela, however, and they start to think that maybe Connor knows more than he’s letting on. Frank, meanwhile, finally admits that he didn’t kill Wes to Bonnie (something we all more or less realized at this point), and he starts trying to work with Bonnie to make things easier for Annalise.

After some wheeling and dealing, we find out that Atwood at the DA’s office was the one that really had Wes’ body moved. Additionally, the body was creamated, something very unexpected to everyone involved. They also find out that the Mahoneys very well could have been involved with Wes’ murder, but Annalise still doesn’t want to jump to conclusions. In the end, through a cliffhanger flashback, we also learn that Connor performed CPR on Wes at the house before the fire. This is a big moment for everyone, and it opens up even more possibilities for the show to explore.

We’re almost at the end of the season for How to Get Away with Murder, and it’s been great (from an audience perspective) to watch everyone’s lives unfold the way that they have. It’s looking like we’re going to find out who killed Wes very very soon, and I can’t wait to see the ending.

What did you think of this week’s new episode of How to Get Away with Murder? Let us know your thoughts in the comments down below!

How to Get Away with Murder Season 3 Episode 13 Review: "It's War"

As everything continues to play out, we’re closer than ever to finding out who really killed Wes.