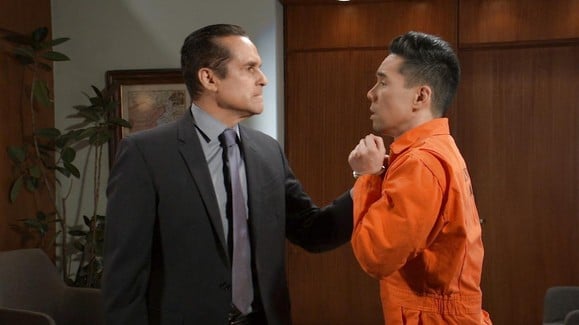 General Hospital fans ended last week on an emotional note. So much has happened. Anna blames Jason for all that is going on in her life and the lives of those whom she loves. She’s not happy, and she is not making it even a little bit secret that she feels he is to blame. Sam is having to be put in her place by Jordan left and right, Jordan is a mess, Curtis is not sure how to handle all of this, and Michael is amused. Willow is a mess who has to figure out what she’s got in store in her life next, now that her baby is gone and all she’s been doing to protect him for the past year was for nothing. She is horrified, she is emotional, and she’s finally opened up in a way that we cannot figure out in any other capacity. She’s sad, and we are sad for her.

The emotional conversation that Sasha and Michael had on Friday was probably for the best. They did need to get things off their chest and out of their minds and on the table as they were being said and done, and we know that. We know that they have so much more to deal with right now, and it’s all going to be all right for them in the future. They have to make it all right, and they have to focus on things being better. We don’t know what else to do with this or how to handle this, and it’s a mess. But, they have to focus on things that are good, and this conversation allowed them to put things out in the open that they needed to discuss and get out there. It was good for them.

Tomorrow I’ll be on #GH during the day and #Station19 at night!! Make sure to tune in 🥳 @GeneralHospital @Station19 @ABCNetwork

In the latest #DAYS, Ben gushes gratitude for Ciara’s efforts to save him from the executioner. https://t.co/ZsCmiozQaB pic.twitter.com/yG9HU9Uum1

Sonny has to do what he said he would do. He is nothing if not a man of his word — when he wants to be. He made a promise, and he is not going to allow that promise to go broken. He’s going to keep his word, he is doing what he said he was doing, and he is changing the game. He knows that this is a risk and that he might not be able to successfully make this happen, but he also knows that he has to try, he has to do this, and he has to make the effort. He’s not in a good place right now, and we are not sure he can do much else other than focus on something that is within his realm of understanding.

Jason is on alert. High alert. He knows that something big is about to go down, and he has to keep his game strong so that he can keep safe the people he loves the most. He’s not sure how to do this in the moment, but he is sure that it needs to be done. He’s got a lot going on, and he’s not sure how else to focus on that right now. He’s staying strong. Julian, on the other hand, is going to find himself in a situation this week where he finds some relief. We aren’t sure what he is looking for or where he will find it, but he needs it. He’s had some rough times — all his own fault, of course — and now he’s looking for that relief.