There is only one reaction one can have after watching “Blackwater,” the ninth episode of Game of Thrones‘ second season. It’s the simultaneous state of euphoria and post-trauma, the affirmation that all is right with the world mixed with the disappointed realization that you won’t see any television episode quite as epic as that for a very long time. If those words fail you, a picture gets the point across even better: 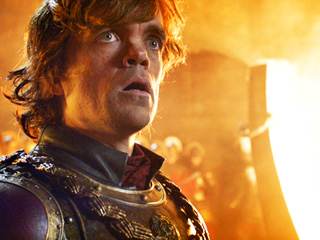 What you saw with Sunday night’s episode was a realization of Game of Thrones‘ true potential. The series has always been great, managing to not feel terribly stretched despite juggling multiple, disparate plotlines, often within the same episode. But “Blackwater” ditched the jumping around, and simply focused on one event: the Battle of Blackwater outside King’s Landing. And it was transcendent.

Shall I count the ways I loved “Blackwater?” The list is lengthy:

Overall, “Blackwater” replaces “Baelor” as the reigning best episode of Game of Thrones. It nailed one of the book series’ most definitive scenes, and provides not only hope but confidence that other definitive scenes in the future (including the one that sees the reprise of “The Rains of Castamere”) will be just as riveting. Game of Thrones has cemented its position amongst the best of the best. What came before was just a flaming arrow arcing its way through the sky. Now the Wildfire has ignited. A