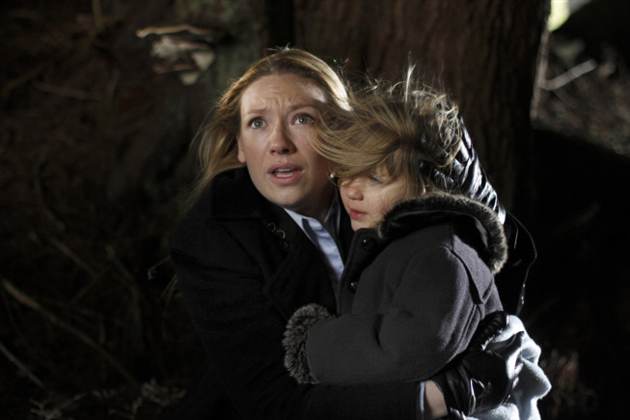 I’m sorry that Fringe has to take such a long break (no new episodes until April 1. April 1!), but it could choose no better episode to go out on than this one. The mythology-heavy “Jacksonville,” both expanded the show’s mythology, and it also gave us a nice little character reveal (something we already know, but another character discovered) that will be absolutely crazy to see the outcome of when Fringe returns on 4/1 with the episode “Peter.”

But tonight’s episode of Fringe centered on the alternate universes that have been the main mythology since the show’s beginning. It appears that Thomas Newton (Sebastian Roche) is causing rifts between our universe and the parallel universe, with disasterous results.

I have to say, the writers of Fringe made the best of what could have been a bad situation. While it seems Roche was unavailable to play the role of Newton in the episode, they made his prescence quite large in the episode without actually showing him. It’s this amount of subtlety that makes Fringe so deep.

Olivia also found out quite a bit about herself, and even met young “Olive” during a dreamscape-like sequence. The sequence was distinctly Abrams-esque, even if he didn’t direct the episode (lots of lights glaring on the lens). It managed to keep the same-old, same-old Olivia mind-trip theme fairly new and interesting. And I still want to know what that flying shadow was.

There were some really icky effects with the splicing of two people from Over There. Astrid herself thought they were too icky (which was a little strange, considering she’s dealt with melted brains and maggots on the show). She instead got the important role of finding a Richard Nixon silver dollar.

Olivia also got to undergo some personal character development of rediscovering her innocence, so to speak, in her ability to feel fear, which she rediscovered during the crisis with the buildings disappearing. It was a deep episode for her, especially when she discovered that Peter was from the alternate universe, and has the “glimmer,” (which, oddly enough, seems similar to the effect used for the dream sequences in “Dream Logic”).

The episode indeed left me wanting much, much more, but not because the episode was lacking in any way. Rather, it gave us so many twists that if they don’t give us more, I’ll feel cheated. This is going to be a long, long break until April 1.

Check for Featherlite’s recap on this site in the near future. Meanwhile, I give “Jacksonville,” an A.