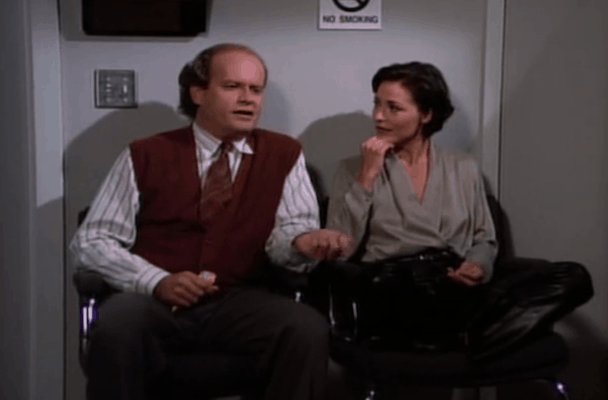 There are a lot of Frasier episodes that have not aged well: “Call Me Irresponsible” is definitely one of them – and I’m not just saying that because Daphne is taking Christmas card photos in the middle of October. From its superficial examination of radio psychology to its laughably retrograde gender politics, “Call Me Irresponsible” is a hilariously dated half hour of the show, one that utterly fails to engage the audience in any kind of significant emotional way, immediately putting itself in the shadow of the much stronger stories Frasier‘s already delivered in the six episodes preceding it.

There are moments in passing where “Call Me Irresponsible” briefly approaches scenes of discernible intelligence. Most of this comes from the signature banter between Niles and Frasier; the two of them arguing over whether Frasier should date the former girlfriend of a caller to his show is riotous, both exchanging stories over their physical reactions to breaching their personal code of ethics. Even this story is operating on a surface level; there’s never any connection of this behavior between the children and parents (particularly Marty) which robs it of one of  Frasier‘s storytelling strengths: bridging the gap of understanding between father and son by finding connections amid their dissonant personalities. Instead, it goes for physical comedy, with Niles getting nose bleeds and Frasier feeling nauseous; while this is certainly a way to get a few quick laughs, it’s a classic exercise in diminishing returns, wearing out its welcome by the end of the episode.

And then there’s Katherine (whose name is literally said twice through the entire 22 minutes), who is less of a character and a way to throw a melange of ’90s stereotypes into one woman. Lonely (“Sometimes, I turn on the TV just so it doesn’t feel like I’m eating dinner alone”) and horny, Katherine shows up at Frasier’s radio station to yell at him for encouraging her boyfriend Marco to break up with her – then immediately starts hitting on Frasier. They’re dating within days, until Frasier can’t sleep with her – because he’s literally about the vomit; let me point out that at no time does Frasier ever actually have to make a sober, conscious decision about his morals – so she brags about what she was going to do to him sexually, then storms out in a huff, insulting his cooking on the way out (because ugh, women are the worst!).

Really, Katherine’s character only exists so the episode can treat her as a punch line: look at Frasier frustrate this sexually desperate woman, denying her pleasure twice, while making decisions about her romantic life for her! And here’s the added bonus: once again, Frasier is still planning to date her, even though it’s clear to him she can’t express any agency of her own! Provocative yet docile – this is not what Lilith was, and this is not the kind of woman that I believe Frasier would ever be attracted to. And without tapping into his own growing desperation not to be alone (something that would occasionally pop up through the show’s run), “Call Me Irresponsible” really becomes a fitting title, an uncomfortably one-sided story that tries to paint Frasier as an empathetic human being, because he didn’t follow through on sleeping with a woman whose relationship he manipulated. What a great guy, amirite?

To say “Call Me Irresponsible” is a little off-putting is an understatement; however, there are moments when it feels like Frasier is approaching at least some sort of conversation about the boundaries of ethics (like Niles, getting a nose bleed after Frasier points out his patient got him a discount on it). Those moments, while not as enlightening or rewarding as others that involve Frasier and his father, at least give some interesting ironic notes to the proceedings – but when the episode ignores those for that ugly climatic scene with Frasier and Katherine, most of that goodwill goes right out the window, rendering “Irresponsible” as laughably close-minded (and laughless) as one could possibly imagine.

– There are a number of funny little details in this episode: the first caller trying to hear himself on the radio, the coffee shop patrons groaning when he makes his little “change” joke, or Niles ignoring stop signs then trying to slam on his brakes in the middle of an intersection. These moments almost make this episode worth sitting through.

– “Call Me Irresponsible” suffers from a severe lack of Marty and Daphne; they’re really only in the one Christmas scene, which sticks out like a sore thumb among the other scenes of the episode.

– The “pleasure” sounds Frasier and Katherine are making are a little overwrought and cartoonish, even for Frasier.

– Frasier seriously looks like he’s turning into a wolf when he unbuttons his shirt and sits in the moonlight. #chesthair

– There is actually a really good scene between Frasier and Katherine, as they eat M&M’s (peanut, if you had to know) and talk about what it feels like to matter to another human being. “It’s the ultimate expression of our humanity,” Frasier says, and it’s the ONE moment where Frasier allows itself to be eloquent. It’s quite a tranquil little scene, and one that’s forgotten soon after, unfortunately.

– The title card for the last act simply reads: “The Obligatory Sex Scene.”

– “I’m not going to be outperformed by a Barker lounger!” 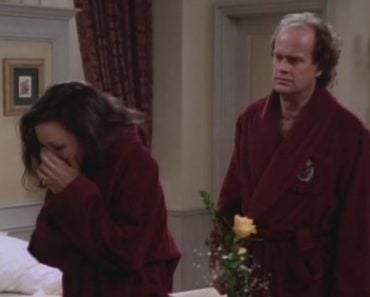 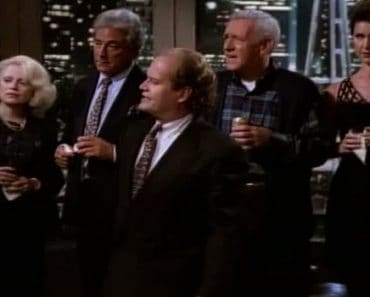 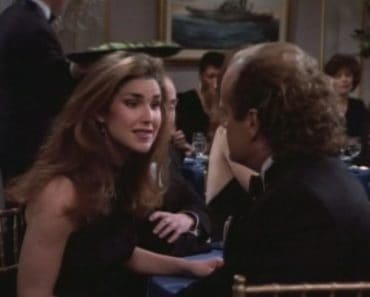 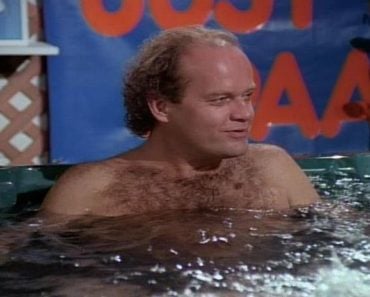