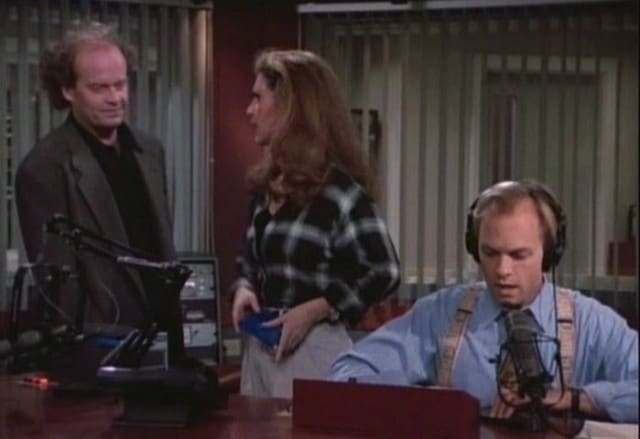 Sandwiched between the superior “Author, Author” and “My Coffee with Niles,” “Frasier Crane’s Day Off” is the least rewarding installment of the Trilogy of Crane Brothers that closes out Frasier‘s first season. In many ways, it is a carbon copy of “Author, Author,” cramming Niles and Frasier into small spaces and observing their competitive nature and psychological predilections run wild – only this time, “Frasier Crane’s Day Off” separates them and pays all the more for it.

“Frasier Crane’s Day Off” really has one shining moment: watching Niles and Roz interact with each other, something Frasier shies away from far too often in its first season. Early on, it’s just jokes about Niles not knowing who she is, moments that tease the potential of their interplay, Roz’s lifestyle contrasting with Niles’ in a number of interesting ways. “Day Off” finally cashes in on that a little bit, when Niles fills in for his sick brother at the radio station, and gets a taste of the dim limelight known as radio therapy. It also allows the separated worlds of Frasier’s workplace and family life to cross over a bit, for the first (and certainly not the last) time. While “Day Off” remains an episode about Frasier and his love/hate relationship with his brother, the biggest joys come when other people find their way into Frasier’s booth, giving us great moments like Niles excitedly saving a marriage on the radio, or Roz’s enthusiastic “I guess all the good ones are married” when Niles tells her about his incredible bladder control.

Knowing a Roz/Niles interaction is the highlight of the episode, it’s no surprise there isn’t a lot of weight to “Day Off,” which focuses on a story better told in different episodes. There’s just way too much slapstick Frasier in this episode: dreaming about his radio station blowing up, making whimpering sounds and flailing around in his feverish state, the desperate jealousy that rises to the surface when he hears his brother doing a good job on the radio. All of these moments are ones we’ve seen many times this season; more importantly, we’ve seen the conversations these scenes stem from in other episodes far superior to this one, reducing Niles and Frasier’s intricate relationship into something much more simplistic and melodramatic.

Outside the simple pleasures of Gil Chesterton trying to weasel his way into Frasier’s time slot, and every snide comment Roz makes to Niles while he’s at KACL, there just isn’t a lot to “Day Off,” which floats from Frasier’s frenzied state to Niles dominating the airwaves without much of a point, except accelerating Frasier’s neuroses to the point he shows up at the station delirious, which leads to the “wackiest” scene of the episode: Frasier being completely nonsensical on the air as he tries to take calls through his sick haze. That’s really the nail in the coffin of mediocrity for “Day Off.” The goofier Frasier gets, the less funny “Day Off” is, devolving into silliness before abruptly ending without any kind of meaningful resolution, rendering itself an ineffective penultimate episode, unfortunately placed between two of the most interesting half hours of the show’s freshman year.

– “Plump, gooey, and destined to rot your teeth.” “I don’t like his [Gil’s] phony British accent, either.”

– Niles’ phobia of germs only plays a minor role in this episode, though David Hyde Pierce wrings what physical comedy out of it he can.

– “Let me make something clear – he’s Freudian, I’m Jung-ian. There will be no blaming Mother today.”