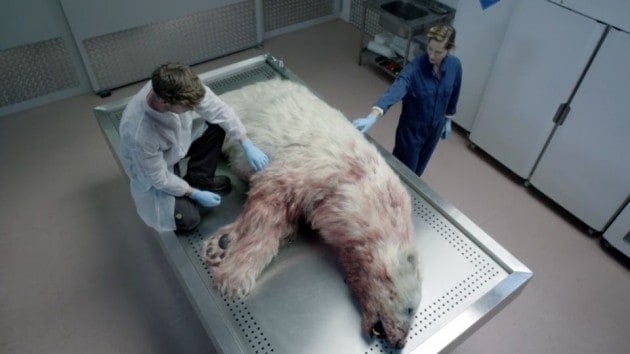 The mystic dominoes are beginning to fall in Fortitude: “Episode 9” is an important turning point for Fortitude, even though the only real on-screen action is Frank Sutter’s disturbing torture of the creepy Markus (who we can’t help but feel sorry for at this point, right?). There are ominous suggestions everywhere as Henry prepares for one last snowmobile ride, and Liam gets let out of his protective cocoon and sent home – and anytime the camera pauses for an emotional moment, we linger on the faces of characters as they reach a particular breaking point in their journey.

And then, Frank goes and breaks the tupilaq.

That moment, the true visualization of the episode’s central metaphor, is a massive warning bell for the conflicted people of Fortitude; simply the image of blood leaking out on Frank’s hand (another evocative shot, considering what he would end up doing to Markus) is revealing enough to know that something is very wrong here, a notion backed up by the speculative science Natalie and Vincent discover on the polar bear Stoddart had planned to dissect, that toxins of some sort are finding their ways into the bodies of polar bears and humans (thanks to lobotomizing poor Shirley), and that this could be a little more significant than shutting down the construction the glacier hotel.

But that’s not a problem anyway: the people of Fortitude, no longer subsidized by the mainland, find themselves more isolated than ever – an isolation that comes at the cost of the hotel project, which is dead in the water (on the ice?). Everything is falling apart, from temporary allegiances (Morton and Dan have a hissing match in the evidence room) to Markus’s fingernails, and lurking dark in the center, is whatever the crazy thing is possessing little Liam and all those cannibalistic polar bears. The important thing is that with everything else in the world hitting a crisis point, nobody is available to pay attention, and as a good horror movie always shows us, the moment you stop paying attention is the moment something truly sinister can sneak its way into your world.

Murder mystery, supernatural thriller, environmental allegory… there are a lot of shoes Fortitude is wearing, and it’s impressive how the show is able to juggle them all simultaneously, running the gamut from beautiful, distorted moments of hope (Frank and Jules’ very out-of-nowhere reconciliation, Dan saying goodbye to Henry), to ominous moments (Ronnie is… something bad?) to straight up Western showdown: Fortitude is a master of its form, and it makes momentum-gathering episodes like “Episode 9” so fun to watch, when many other shows would drag themselves down in silly ancillary plots or rote characterization. Even as the mystery unfolds, characters and mysteries alike remain rich: scenes like Hildur confronting her husband land with an emotional gut punch, while the dissection scenes in the lab touch on an equally uncomfortable, though completely different type of drama.

It grows more impressive with each week, even in moments when the plotting of various stories gets entangled and arranged in awkward ways (with so many balls to juggle, this is bound to happen at some point, however – what’s important is is that Fortitude handles it with grace, relying on a wildly engaging visuals and also music–thanks to that unsettling score from series composer Ben Frost). It’s this rich approach to storytelling that is turning Fortitude into one of the most engrossing television mysteries in recent memory.