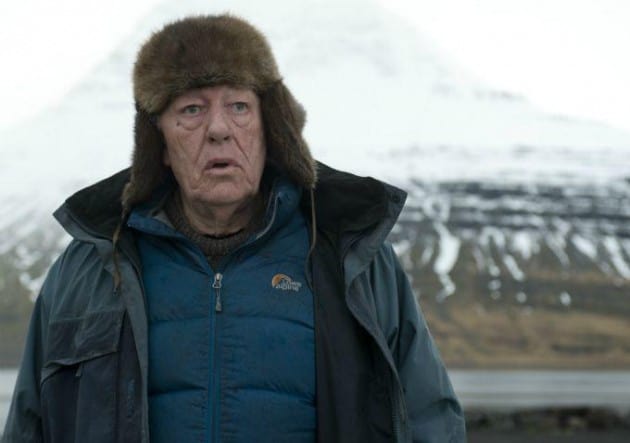 To call Fortitude‘s premise a ‘familiar’ one would be an understatement: eccentric detective heads to small, close-knit, slightly warped town in the middle of nowhere to solve a grisly murder… not exactly inspired material, not on the surface. And what a thin surface it is; murder mystery provides but one of the dramatic pillars in Sky/Pivot Network’s new, snow-laden drama from Simon Donald, creator of the original British miniseries Low Winter Sun, which AMC’s ill-fated show of the same name was based on. Packed with unsettling images contrasted against the expansive white of its Arctic setting, tinged with elements of sci-fi and dystopian drama, and led by a number of strong, if somewhat non-descript, performances, Fortitude is a promising pilot, with the framework for a very weird, dark drama set neatly into place.

When a man in the “safe” town of Fortitude ends up mauled in his apartment (looking like he was literally ripped apart), the peaceful surface lives of everyone in town begin to pull apart at the seams. For the entirety of its two-hour premiere, Fortitude is presenting new characters and situations to the audience, connected by the running thread of the weird carcass found on the ice in the first half, and the murder mystery that frames the entire first season in its back half. And while its all very familiar material, Fortitude‘s meticulous approach to storytelling and building character make for an engrossing watch, even if it may be hard to parse out who everyone is and why they matter.

Where Fortitude‘s world-building may be a little dense, however, it’s character-building is equally unpronounced, shrouding almost every character in an aura of mystery as to what kind of person they really are. Is the Sheriff (Richard Dormer) a “good” sheriff, or just a guy with a lot of connections and a gun? Are those two ideas mutually exclusive? Is the town’s mayor (played by the wonderful Sofie GrÃ¥bÃ¸l of Forbrydelsen), a pragmatic woman, or someone willing to murder to keep her “hotel built into a glacier” dream come true? Fortitude presents a world with characters and a town facing the corruption of their own souls – the kind of existential small-town drama that made Twin Peaks and Fargo as memorable as they are.

But that comparison sells Fortitude short a little bit; it’s certainly its own creature, and I’m not just talking about whatever those children found that nearly killed them. Devoid of unnecessary exposition, Fortitude lets actions speak for themselves; the sheriff covering up an accidental shooting, a father who nearly lets his son get killed while cheating on his wife; the old, cancer-ridden professor who can’t live with the fact he killed a man… and polar bears, of course, hardly the only moment of Fortitude that felt slightly Lost-ish. Fortitude is world-building at its finest, building a town and crafting events that define character, rather than spend a lot of time standing around trying to explain it.

Even Fortitude‘s more supernatural elements (something that may be presented a little more bombastically on other shows) are subdued; “Episode 1” is all about building mystery, clouding each character and situation in the snowy fog that sits around the town for hours throughout the day. As multiple characters point out, this is a town that only lives in light part of the year; the darkness is always threatening to take over the town, and even does, for entire portions of the year. Those ominous quotes are baked into every scene, shot, and situation, from the darkening clouds in the sky, to the contrast of darkness against the white-washed, empty backdrop of daytime; again, when it comes to creating atmosphere and filling out a world with visual meaning, Fortitude is a lot more forthcoming than it is with dialogue or character.

Don’t mistake that lack of clarity for muddling drama or confusing red herrings, either: with the talents of Stanley Tucci (who plays a mainland investigator sent in to Fortitude), Richard Dormer, GrÃ¥bÃ¸l, Christopher Eccleston, Michael Gambon, and Sienna Guillory among the many talented names on the cast (Jessica Raine is also worth a mention; she gives much-needed levity to Jules’ character in the pilot), Fortitude is clearly concerned with being a character drama – these are just stories, like many of the other events and people alluded to in the unsettling, meticulously-paced pilot, being saved for a later date. Fortitude‘s ambiguity is clearly not an example of a show that doesn’t know its characters; on a show where every morsel of information feels important, however, the decision to hold these bits of personal exposition at bay to allow for more expressive performance (and to add to the aura of mystery) is a great one, and pays off multiple times throughout the second hour of the premiere.

If there’s one complaint about Fortitude‘s pilot, it’s in its similarity to The Wire, of all series. Fortitude is not a show about explicit definition or good vs. evil. It’s a show where everyone lives in the gray, trying to balance the light and dark within them, while keeping the latter at bay as much as possible. Living in a town that spends six months in the dark makes that kind of impossible, though: those attempts to keep the worst inside ourselves (and in the town itself) at bay can be more damaging than facing the realities of our decisions and the world around us, an idea that Fortitude has its finger directly on the pulse of. It makes for the most intriguing pilot of the young new year, a surprising new contender in an increasingly-crowded television landscape.