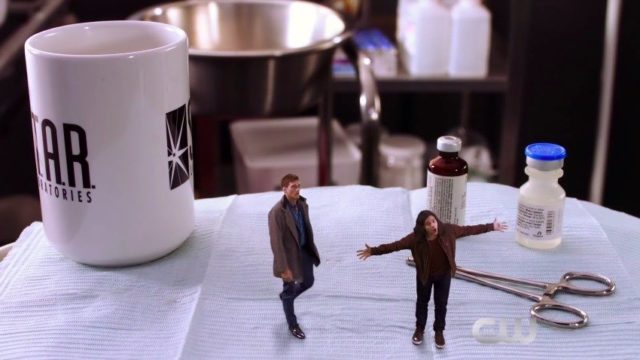 While The Flash continues to deal with Barry rotting in prison, Team Flash is still learning how to function without their top dog. Last week’s episode, “Honey, I Shrunk Team Flash,” dives into the team chasing down a meta who has the ability to shrink whatever he wants through touch only. The episode again dives into a weekly case that seems to just be giving the team something to do without Barry around and DeVoe quietly letting his calculated plan play out.

The concept that this episode presents is actually a pretty fun idea but suffers from trying to juggle too many stories and a lot of convenient plot holes. The episode decides to open up with the meta shrinking down a building, giving the team a reason to try and track him down. At the same time, Barry discovers that Big Sir was wrongfully put in prison, which immediately causes him to try and help out his only pal in jail. This is actually a pretty nice idea and way to give Big Sir a little more depth as a temporary supporting character on the show. With Barry being so stuck, it actually feels nice to see the relationship he has with Big Sir develop a little more. The problem with the plot comes when, conveniently enough, the guy who should have been arrested is the meta with shrinking powers that Team Flash is already chasing down in the episode.

As the episode continues on, The Flash runs into another frustrating plot hole as well. When Team Flash fails in getting the criminal to admit that was the one who committed the crime at Mercury Labs, it pushes Barry to finally take matters into his own hands. He waits until it’s the night and uses his super speed to avoid the cameras and run Big Sir all the way to China, where he can live out the rest of his life a free man. For anyone that has enjoyed Big Sir’s short time with Barry in prison, this is an enjoyable ending for the character. Yet, when Barry returns to prison, the warden confronts him about his powers after revealing he installed a secret camera specifically for Barry’s cell. This leads to him revealing to Barry photos of the time lapse from when Barry leaves his cell and when speed force lightning pops up. At this point, The Flash really seems to just make up rules as it goes along. Despite Barry having used his super speed earlier in the episode to cheat while playing cards with other inmates, the lightning only shows up when it is a convenient way for the show to advance the story. Although Barry being in jail isn’t an ideal situation, The Flash has actually done some interesting things to make it an interesting experience for the character, but choosing to move in this direction with his story feels cheap and a little lackluster.

As for the surprise that Cecile has developed telepathy powers, that is probably the most interesting part of the episode. The show chalked it up to dark matter and her pregnancy, but it still feels too conveniently brushed over to be the truth. The fact that nobody on Team Flash is more concerned with her random powers feels a little too suspicious. What adds to this is the fact that “Honey, I Shrunk Team Flash,” does not feature DeVoe at all, and since the calculated villain swapped bodies, he has now sunk back into the shadows which feels weird. It wouldn’t be shocking if Cecile’s powers were somehow a side effect of DeVoe’s new powers from when he swapped bodies with Dominic Lanse. The episode also gives a lot of attention to Harry, who is in a worse mood than usual because he can’t stand how calculated DeVoe has been. His frustration about being outsmarted is highlighted quite a bit, so if Cecile’s power is an extension of DeVoe reading her mind to gain information about Team Flash, it would only add to the long list of ways Team Flash is coming up short.

This episode of The Flash once again feels like a filler episode that misses the mark. While the ideas at the episode’s core were nice thoughts, the execution felt off and messy. The ideas might have worked better as individual episodes, but perhaps with a limited amount of episodes in the season’s second half, the writers and creative team couldn’t fit it all in unless they combined the ideas. It will definitely be interesting to see where Barry’s story goes after it is revealed that the warden is working with Amunet Black. It will be nice to see Katee Sackhoff have more to do in her role, and maybe Barry can find a way to sneak off and at least visit the team.