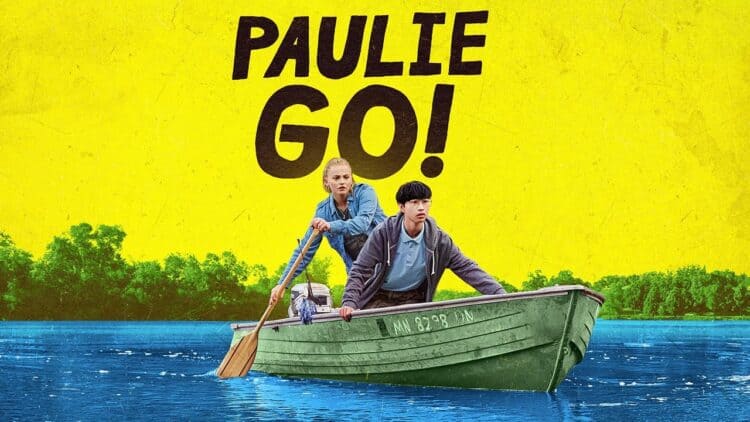 The indie comedy Paulie Go!, directed by Andrew Nackman with a screenplay by Jake Greene, was released on several digital platforms last May 22, 2022. The film follows Paulie, a young robotics prodigy, played by Ethan Dizon, who sets out on a road trip with a stolen van to find the professor Chuch Shikenjanski (Bernard White) who rejected his application as an apprentice. In his journey, he meets Avery (Madison Wolfe), a young girl who is adept at fishing, and the two form an unlikely friendship. The film has received positive reviews from critics and in an article published by The New York Times, they wrote, “Paulie Go!” unabashedly aspires to the sentimental whimsy that once swamped film festivals, and certain moments — including a self-consciously awkward dance scene — seem near quotations of dozens of offbeat movies that came before.” High on Films also praised the film in their review saying, “Overall, Paulie Go! (86 minutes) is an enjoyable coming-of-age comedy spearheaded by poignant performances from Ethan Dizon and Madison Wolfe. It celebrates individuals’ passions and idiosyncrasies and also highlights the need for true friendships in order to navigate our way through life.” If you enjoyed watching the indie film as much as we did, here are five movies we highly recommend watching when you’re done with Paulie Go!

Just like Paulie Go!, the 2000 American comedy-drama film Almost Famous features a character who is desperate to accomplish his goal as he goes on a journey to get his first cover story published. Almost Famous is written and directed by Cameron Crowe and stars Billy Crudup, Frances McDormand, Kate Hudson, and Patrick Fugit. Set in the 1970s, the plot centers on 15-year-old William who lands a writing assignment at Rolling Stone to do a cover story about the band Stillwater. The film is loosely based on Crowe’s experience as a teen writer for Rolling Stone. The film received critical acclaim and earned a number of accolades including four Academy Award nominations, winning Best Original Screenplay. It also won the Grammy Award for Best Compilation Soundtrack Album for a Motion Picture, Television or Other Visual Media and won Best Motion Picture – Musical or Comedy and Best Supporting Actress – Motion Picture (Hudson) at the Golden Globes. Empire gave a glowing review of the film saying, “It’s the most convincing account yet of what rock and roll felt like to the people backstage as it turned from a movement into a career. Those who were there will love the detail. Those who weren’t, well, they’ll wish they had been.”

The Way, Way Back

The 2013 coming-of-age comedy-drama film The Way, Way Back also centers on an awkward teen who forms a special bond with a waterpark’s manager while working in the summer. He finds solace at the waterpark with his newly found father figure as he avoids spending time with his mother and her new boyfriend. The film is written and directed by Nat Faxon and Jim Rash in their directorial debuts and stars Liam James, Steve Carell, Toni Collette, Allison Janney, AnnaSophia Robb, Sam Rockwell, and Maya Rudolph, with Rob Corddry, Amanda Peet, Faxon, and Rash in supporting roles. The film was a commercial success and it received positive reviews with particular praise for the performances. The Guardian gave special mention to Carrel and Collette’s performance in the films and wrote, “There’s some terrific performances – particularly from Collette, putting flesh on some quite bare bones, and Carell, a wholly plausible, half-sympathetic overgrown jock with a bullying charm.”

Giving off a similar vibe as Paulie Go!, the 2004 American comedy film Napoleon Dynamite directed by Jared Hess who also co-wrote the film with Jerusha Hess is a must-watch. The film which has found a cult following over the years stars John Heder in the titular role, a nerdy high school student who struggles to fit in and has complex family dynamics. The plot centers on how he navigates his life and builds a new friendship with a new immigrant student Pedro played by Efren Ramirez. Reelviews gave particular praise to Heder’s performance in the film and wrote, “John Heder plays Napoleon like a teenager who doesn’t quite fit into his long, lanky body. The performance is dead-on. I don’t know if Heder was a nerd in real life, but he certainly makes us believe.”

Similar to Paulie Go! the 2019 American comedy-drama film The Peanut Butter Falcon involves themes of perseverance and the importance of friendship in reaching your goals. The film was written and directed by Tyler Nilson and Michael Schwartz, in their directorial film debut, and stars Shia LaBeouf, Zack Gottsagen, Dakota Johnson, Bruce Dern, Jon Bernthal and Thomas Haden Church. The plot centers on a man with Down Syndrome who runs away from a nursing home to pursue his dream of becoming a professional wrestler. On his journey, he meets a fisherman and they form a special bond.
The Guardian published a review of the film and wrote, “Equally impressive is the sense of place that Nilson and Schwartz evoke. If not quite the bayou mysticism of Beasts of the Southern Wild, the film crafts its own distinctive world – a wetland badlands with its own deeply etched moral codes and systems of enforcing them.”

The Fundamentals of Caring

Also involving a road trip and an unlikely friendship, the 2016 American road comedy-drama film The Fundamentals of Caring follows a retired writer who lands his first job as a caretaker of a teen with Duchenne muscular dystrophy. The two bond and go on a road trip to visit famous landmarks in America which helps them process their struggles and find hope. The film was written and directed by Rob Burnett, based on the 2012 novel The Revised Fundamentals of Caregiving by Jonathan Evison, and stars Paul Rudd, Craig Roberts, and Selena Gomez. The Common Sense Media wrote a review of the film commending the film’s take on the genre saying, “This film manages the difficult task of being both a dark comedy and a poignant story. The balance keeps the movie from being too glib and smug due to too much of the former, and too mawkish and sentimental due to too much of the latter.”