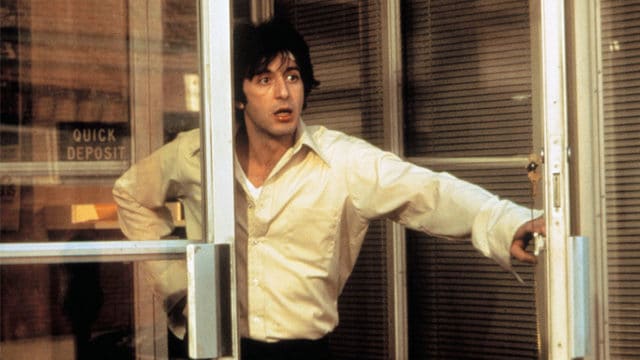 It’s a little hard to realize that some films are only supposed to take one day or less to explain the entirety of their plot, premise, and main points. From what most people know films take weeks and even months to film in order to get things right, and thinking that it all amounts to one day in the life of the characters is hard to swallow at times. But some films, despite only being made to show the happenings of one day, are still confined to that 24-hour time period and no more. That makes the audience realize that the reason that the film seems to last forever is that everything has to be packed in to that one day.

It’s a struggle to be honest, but if you realize how much you can get done in one day then it becomes easier to understand.

Well-laid plans don’t always translate so well when they’re put into motion. This is especially true for Sonny and Sal, two would be bank robbers that are attempting to steal enough money to pay for Sonny’s ‘girlfriend’ Leon to have a sex change operation. Things don’t go quite right when they realize that they missed their payday after the last cash pickup of the day, and things kick off from there, concluding at night when Sal is killed and Sonny is arrested.

Bueller? Bueller? Is any film more loved than this one when it comes to recounting old high school films? That’d be toss up I think for some people but others might sound off with a definite NO when taking the side of Ferris Bueller. It’s essentially a film about a skip day in which Ferris and his friend Cameron discover a couple of things about their own lives that might make a difference moving forward and could possibly help them to develop as future adults.

Argue all you want about multiple days but Groundhog’s Day still focuses around that one-single-day. In the beginning of the film Phil is kind of a miserable guy that can’t stand people and in turn isn’t all that friendly. But look at all the things he does at the end of the film and realize just how full a person’s day can be if they really try to live up to their potential.

Not a lot of people would actually choose to be in school on a Saturday unless there was something worthwhile to do. Detention is not what a lot of students would call worthwhile, but it’s still something that has to be done occasionally so that they don’t make their situation even worse. These students found out a lot about themselves in a period of 8 hours, probably more than they were bargaining for.

The best way to break anyone is to find out their limits and then push past them on a regular basis. This is what happens during Training Day as Denzel’s character pushes Hawke’s right past his limits and doesn’t stop. If you want to make someone into a toughened, experienced individual then sometimes you’ve got to break them down repeatedly first.

There’s a lot that can happen in a single day.