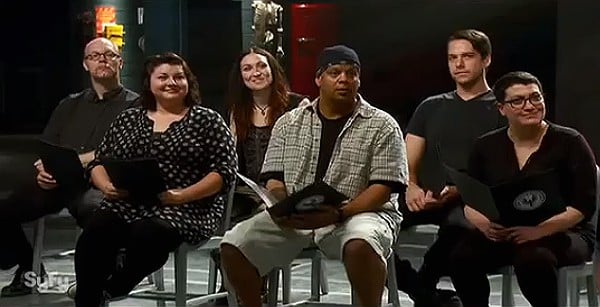 Face Off is one of the most creative reality shows on television.  I caught last week’s episode where they had to come up with make-ups for a long-lost culture based on some artifacts and a made-up language that was created by guest judge David Peterson – the man who created the “Dothraki” language for Game of Thrones.  A show like Face Off reminds viewers of just how work goes into the shows and movies we watch, and in ways we don’t always think about.  For instance, yes, someone had to make up that language!

This week’s episode title of Face Off  is “Covert Characters.”   Host McKenzie Westmore is having a lot of fun bringing the contestants into a cold-looking big room with nothing but some metal chairs and a giant TV screen and calling it “Command Central.”  Someone mutters, “Face Off, Agents of Shield” – which makes me chuckle.

McKenzie explains their “assignment” – which is really a chance to plug the new Syfy series Hunters.  The contestants have to create a realistic-looking make-up as disguises for a group of secret agents.  We’re not talking about the Hollywood baseball cap and big-sunglasses look.  The agent/models need to look nothing like themselves – but completely real.  This challenge is going in the opposite direction from last week.  Not only are they going for everyday realism, but it’s a focus individual challenge – so no teams!  Already, Rob is nervous.  Kaleb doesn’t look to thrilled either.

Their mentor today is Michael Westmore, who McKenzie notes has made a whole lot of realistic disguises – for people he can’t talk about.  The work he can talk about includes creating disguises for the L.A.P.D. when they’re doing undercover work, and disguises for the late Michael Jackson so that he could go out undetected.   The funny, not so funny, story is about a guy who came to the studio to be made up for a masquerade party – only for Mr. Westmore to later find out he used the disguise to go rob a Las Vegas casino! Yikes!

Mr. Westmore gives the groups some tips on how to do this. You might want to remember these for your next Halloween costume.

This time the contestants don’t get to pick their models.  Beneath their chairs are folders with the model they’ll be working with.  This focus challenge will be on the face, so no edges on the mask, and it needs to look real.

Before they all leave McKenzie tells them a last bit of news.  The guest judge this week is the legendary Gale Anne Hurd who is an executive producer for The Walking Dead, as well as this new show Hunters.  Her resume is way too long to go over, but, to give you idea about the extent of her work: she wrote The Terminator and was a producer for it as well.

Right away certain people stand out as being problematic.

Njoroge sounds peppy and confident in his idea to turn a blonde woman into an asian male, but his design drawing reminds me of a Nintendo game character.  Meanwhile, the main feature of Kaleb’s drawing to turn his female model into an “Eastern Indian” woman seems to be the giant scarf draped around her face.  Well, that should hide some edges at least.

Yvonne is turning her agent into a rock-n-roll guy.  Umm, the point is to not stand out nor draw attention to yourself.  It’s a good thing she has immunity.

Mel is glad that she got a female model to work with because it’s easier to add things on to the smaller features without it looking weird. She’s turning her young woman into an old man.  It sounds cool, but she’s already worried about being able to pull it off in the allotted time.  Why would you set yourself up like that?

Melissa seems to know what she’s doing and, and shows a photo of a female to male disguise she did.  It looks good.  She’s not doing a gender change though.  She’s turning her pretty young model into a middle-aged frumpy woman.

Robert makes the most sense thus far.  He makes the salient point that if you overdo the makeup and prosthesis add ons the disguise will look fake.  He’s happy to be working alone because he was in bottom looks the last two challenges – and those were teams.  Alone he doesn’t have to convince anyone to do anything. It’s all him.  He’s changing his female agent into a guy.

Rob’s face looks good, and his idea makes sense.  It’s along the lines of Robert’s actually even though, unlike Robert, he’s doing a full face mask.  Rob is making his guy older and changing his coloring.  Anna is also in on this trend.  She’s not messing with having to redo the eyebrows, so no full face mask making for her.  To me, less is more sounds like a good strategy, but I can’t even draw a good smiley-face – what do I know?

Mr. Westmore comes in to see how everyone is doing.  Walter hears that he needs to make his mask look “less cartoony” – ouch!  He immediately starts doing the suggestions given because he does not want to go home! He’s worried.

We get a brief look at Katie’s drawing, the face looks like that of a toy or puppet.  I hope her makeup doesn’t!

Johnny’s makeup design seems good.  He took the advice of considering the shape of the face to heart.  His female model’s unique facial structure lends itself to being turned into an African-American woman.

Thus far, the Westmore’s reactions to people’s work has been tempered, but when McKenzie sees Njoroge’s she’s taken aback.  Mr. Westmore has several tips for him!  He takes them all, but does note to the camera that he’s feeling over-confident.  Yes, he is. He’s been in the bottom the last three times, and looking at what he’s doing I’ve already got him there again.

Melissa shares a story about all the cool female to male disguises she’s done.  Again, why isn’t she going this route now?

Walter is happy with prosthetic pieces because he’s got a lot of edges he’ll be able to smooth out nicely.  Melissa is having problems with the eyebrows on her mask.  Mel gives a good general tip about creating a realistic skin tone.  You need paint on a “blood layer” first, otherwise it will look dead.  She was worried about the time yesterday, but she seems fine now.

Njoroge’s mask reminds me of a kid’s Halloween mask….then he starts putting on this black mustache and goatee and that’s it.  This guy is going home.  There is no way he’s making it through with this.  What’s worse is that he sees what everyone else is doing thinks that his work is good.  Granted, it’s better than I could do, and probably better than a lot of people.  However, this is Face Off and in terms of the challenge there is nothing realistic about this makeup.  His is the worst in the room – by a lot.

Remember how I said Katie’s drawing looked like a puppet?  Well now the color of the skin is woodsy shiny orange – like a puppet.  She knows she’s in trouble.  Kaleb is having skin color trouble as well.

Kaleb is not a happy camper going into last looks!

In this last hour everyone is busy with those final touches.  Katie’s discovered that not only is the model’s skin the wrong color – it’s shiny!  Now it really looks like either a toy that should be in a Disney parade, or someone that’s had way too much plastic surgery and time with a spray-on tan bottle.   Kaleb’s sure he’s going home, his model is orange and the edges aren’t blending around the mouth.  He’s close to tears.  On the other hand, Njoroge is still completely oblivious that he has any major problems at all.  These are going to be our bottom three.  We haven’t seen enough of the others to pick the top ones yet.

The Face Off Reveal Stage

I love watching Glenn Hetrick judge.  He’s got the best poker face ever!

In terms of bad makeups, Hetrick is the kindest to Katie and Melissa.  He can see that Katie was probably trying to make her guy look sweaty, but it only made it look more shiny and plastic.  Hurd notes Katie has the best “eyebrow and mustache placement.”   For Melissa everyone really likes the work from the neck up until the eyes.  Hetrick calls the eyebrow issue “unfortunate.”  They love Rob (who is clearly going to win.) They also take off the glasses of Robert’s model and decide the makeup is much better without the glasses.

There are no surprises this week.  Rob wins the challenge and Njoroge goes home.  I do like his final words though:

Njoroge: Even at the age of 49 you can still chase a dream.

Yes, you can.  Hopefully he’s learned a lot of the areas he needs to keep working on.

That’s all for Face Off  “Covert Characters.”    If you’d like to take a look at the makeups done this week, click here.

I doubt anyone was surprised by who won or lost, but if you had to pick a third runner-up, who you go with? Leave your choice in the comments. I’m curious! 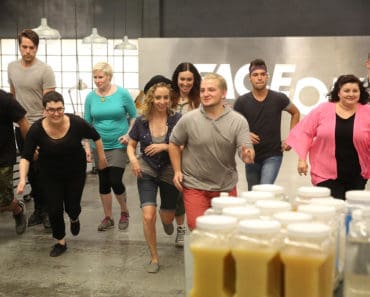 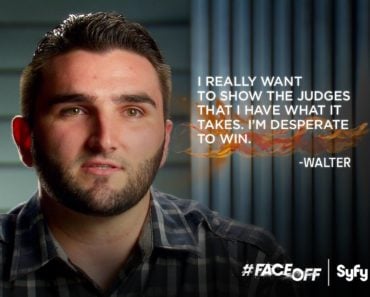