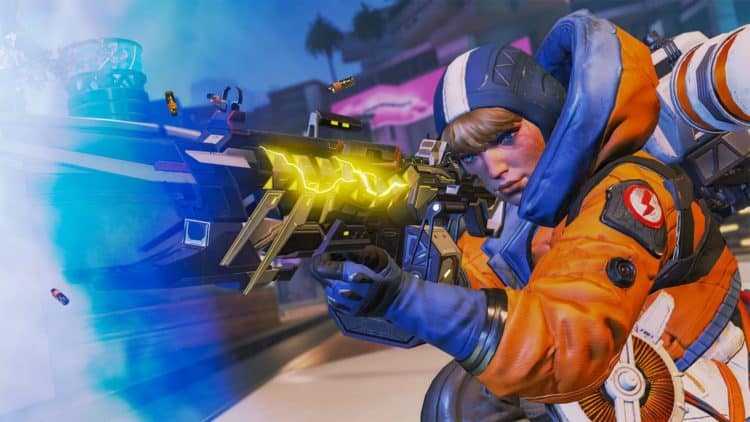 Arenas is a brand new permanent game mode that has been introduced into Apex Legends, and it is the first game mode to take Apex Legends beyond battle royale. Here’s what EA has to say about the new game mode: “Arenas is a new permanent game mode coming to Apex Legends as part of the upcoming Legacy update. It condenses the chaos of 20-squad Battle Royale matches down into more focused 3v3 combat. You’ll face off against the enemy without any other squads coming to crash the party—allowing you to focus on surviving and winning the fight. You’ll compete over multiple rounds, striving to be the last squad standing each time.” So, there’s still a bit of a battle royale component to Apex Legends Arenas, but it’s still a much different mode than anything that players have been used to. So, what do you need to know about the new Arenas mode in Apex Legends?

So, it looks like Apex Legends is bringing in their take on CSGO and Valorant, as you’ve got materials to earn after every round that you can use to purchase and upgrade weapons, ordnance, and healing supplies. After you finish customizing your loadout and preparing for the next round, you’ll be able to jump straight into the action with all of your purchased gear. You’ll have a bit of time to prepare before each round, and after the round starts you’ll find some supply bins with healing items and a few material canisters. Everyone on your team will be awarded 200 bonus materials if you collect a canister, and killing an enemy will award you 75 bonus materials and their items will drop directly onto the ground for quick and easy looting.

Unlike the battle royale portion of Apex Legends, you won’t be able to revive your squadmates if they’ve been knocked out, and vice-versa – you’re down for good. However, you can still revive teammates that have been knocked, but not eliminated quite yet, so you’ll still be able to be a part of the action if this ever happens.

The way that you’ll be able to win rounds in Arenas is by killing all players on the enemy squad. After one squad accomplishes this task, the next round begins, and the cycle repeats until an overall match winner is crowned.

In order to win an Arenas match, you’ll need to have won at least three rounds and be ahead of the enemy team by at least two points. The easiest way to do so is to win three rounds without allowing the enemy team to win more than one round, so basically if you go 3-0 or 3-1, then the match is yours. “However, if your opponent is able to win at least two rounds, things get interesting. You’ll have to pull ahead by two full rounds to win. Going 3-2 or 4-3 won’t cut it. Instead, you’ll have to go 4-2 or 5-3 to secure victory. Rounds will continue until one team pulls ahead by two rounds. If this continues all the way to the ninth round (by going 4-4) the game kicks into sudden death mode. Whoever wins round nine takes home all the glory.”

There’s an easy way to keep track of your progress in an Arenas match by checking the scoreboard located in the top-center of the screen on the buy menu. The scoreboard lights up blue when your team is a single round away from winning, red when the enemy team is close, and yellow when it’s a tiebreaker.

You can use materials to get your hands on weapons, upgrade them, and pick up any additional supplies that you might need along the way. Buying a weapon gives you the base gun with no attachments, but you can upgrade them to white, blue, and purple rarities. Upgrading a weapon will fully equip it with all attachments that are available in that rarity. However, the gear system in Apex Legends Arenas works a bit differently from other competitive shooters like CSGO and Valorant. In Arenas, the gear that you obtain throughout each round will not stay with you going into the next round. “This was something we debated and ultimately we decided on this design for two reasons: 1) to free players up to swap weapons freely between rounds, and 2) to prevent matches from snowballing too hard after one or two rounds.”

There will be some familiar territory in Arenas, along with some new maps that we haven’t seen before. There’s a mix of custom maps as well as existing BR locations from Kings Canyon, World’s Edge, and Olympus to compete against other players. According to EA, “The design goal for custom maps is to emulate the tactics and strategies used in BR within a symmetrical, competitive space. Arenas is first and foremost about proactive combat and that means creating spaces that give you plenty of room to analyze the other team, make meaningful choices, and utilize your Legend’s capabilities to come out on top. With the Legacy update, we’ll launch with two custom maps, with more coming in the future.” The two custom maps that we’re receiving right off the bat are:

That’s just about everything you need to know to get started in Apex Legends Arenas! Honestly, this looks to be the closest we’ll get to a Titanfall 3 anytime soon, but hopefully something is announced at E3 this year!