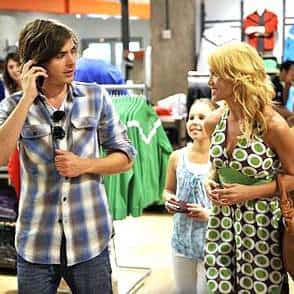 First of all, I’d like to apologize for the lack of an Entourage recap for episode 6.08 “The Sorkin Notes.” I was unable to watch the entire episode, in time, though I’ve since been able to catch the episode.

Having said that, I want to continue by saying OH MY GOD IT FINALLY HAPPENED. After years of taking abuse from Ari, Lloyd has left. He’s quit, leaving Ari stranded high and dry with a new assistant. Why is Entourage such a downer these days? I came out of the episode just feeling depressed that one of television’s best comedic duos has been split up. However, I’m reassured by the fact that it’s almost a certainty they’ll get back together.

The episode starts off with an annoyed Turtle waking up to the new security guys telling jokes and laughing outside his window, rather loudly. Unable to sleep, he begrudgingly gets up, going downstairs to discover that Vince has already been awakened as well. Drama shows up moments later, wearing makeup for his television show because he has a shoot that night, and he doesn’t want to endure the painfully tedious makeup process again. He’ll be wearing the makeup throughout the day — and it’s of a battery acid burn covering half his face. “You’ve got two bad sides now,” jokes Turtle.

Meanwhile the head security honcho shows up with information on the man whose driver’s liscence was found in his couch. The man, Curtis Tucker, was apparently a childhood arsonist, though never convicted. Vince is reassured that he needs the security guys.

Meanwhile, Turtle calls Eric so that he can accompany Vince to the fitting. Eric’s in bed with Ashley, and due to Drama’s inappropriate comments is very terse on the phone. Ashley questions him afterward, grilling him on who called. He convinces her that it was Turtle and Drama, but she still checks his caller ID after he leaves.

Meanwhile, Ari greets Lloyd with the news that Adam Davies has been promoted to the head of his talent agency. As a gift, Ari steals Zac Efron from Davies and takes him on as a client. Efron is happy to be Ari’s client as long as Ari buys him a car, though he is disturbed by the mother who is following him around, much to her young daughter’s chagrin.

While at the fitting, Eric shares with his friends Ashley’s insecurities, but they tell him that he simple needs to earn back her trust. When director Frank Darabont shows up, he is startled by the security guys around them, but when Vince tells him about the stalker threat, he becomes serious, telling him about an incident that happened after The Shawshank Redemption, where he was forced to shoot someone who threatened him. He offers Vince a gun, but after remembering the incident with Johnny shooting out a window, Vince turns him down. He instead returns home to finish the fitting there.

Adam calls Lloyd to offer him a job as an agent. Lloyd, however, feels like he’s being used, and he declines, though he begins to reconsider after suffering numerous abuses from Ari.

Meanwhile, the head security guy has found out that Curtis Tucker, the stalker suspect, wrks at a Please Chest sex store, a place that Drama is very familiar with. He calls a cashier there, and she tells him when Curtis will be coming in to work, and Drama vows to be there then.

Lloyd finally tells Ari that he recieved a job offer, and when he tries to make sure he and Ari are still on the right track, Ari begins adding days to Lloyd’s fifty remaining days, and begins increasing Lloyd’s workload, eventually causing Lloyd to leave after an accidental car accident with Ari’s car.

Meanwhile, Ashley calls E to ask where he is, because he isn’t at work, he’s at Vince’s. Drama, meanwhile, confronts Curtis at the Pleasure Chest, though Curtis has no idea what Drama is talking about. Turtle, having discovered that the break-in was a sorority prank in order for a group of girls to wear Jamie-Lynn Seigler’s boyfriend’s underwear, finally reaches Drama to inform him, and Drama discovers that Curtis’ liscense was in the couch because he was the former owner of the couch.

Ari meets his replacement for Lloyd, Craig, and is abusive to him as well, claiming to have killed Lloyd. As Craig leaves and begins his new job, Ari stares over at Lloyd’s empty desk, ending the episode on a sad note.