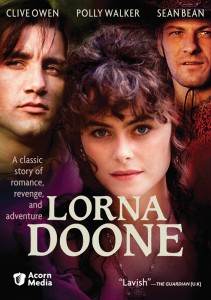 I don’t know if they timed it this way intentionally, but if not, it’s a pretty neat coincidence that Lorna Doone is hitting DVD two days after the premiere of HBO’s new fantasy drama Game of Thrones. Why? Because they both star Sean Bean — though in very different capacities. While in Game of Thrones he plays a morally conflicted patriarch of a large family, here in Lorna Doone he plays a much more villainous role as Carver Doone, the man who killed John Ridd’s father.

The made-for-TV drama, which premiered in 1990, has another fresh (yet still recognizable) face — that of Clive Owen, who plays the vengeful Ridd, who just happens to fall in love with the titular Lorna Doone (Polly Walker). What follows is a frenzied tale of revenge and politics in 17th century England.

The thing about Doone is that even though it was made only twenty years ago, it feels like it’s much, much older than that, due to less-than-optimal film quality. The movie itself is just so-so; it’s tolerable but it feels like a lot of the classic stories we’ve all seen before. It also carries the distinction of having one of the least believable drowning scenes of all time.

The real appeal of this version of Lorna Doone is really reliant on its two stars. This is both Bean and Owen less than five years into their film careers, much more fresh-faced than they are today. Are they as good at acting then as they are now? Of course not — this film proves that Clive Owen hadn’t yet perfected the art of silent brooding in 1990. But as a sort of historical look at these two young actors who are so prevalent today, Lorna Doone is well worth the watch. In fact, the rest of the film can simply be ignored just out of the fun of watching these two.

Order it on Amazon.