Home
DVD Review – Bill Moyers: In Search of the Constitution 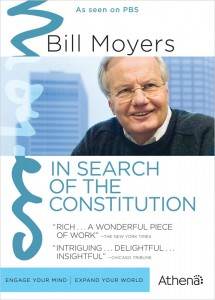 Of the two Bill Moyers DVD sets I’ve reviewed today, I will admit that my favorite was A World of Ideas – Writers. Don’t let that cheapen In Search of the Constitution, though. The four-disc set certainly isn’t a bad one, and is quite engrossing. There are only a few little snags that keep it from being as good as Writers.

While Writers was essentially timeless in that it dealt with mostly philosophy, In Search of the Constitution finds itself in the ever-changing field of politics. Seeing as the series was filmed around twenty years ago, there’s obviously somewhat of a gap left between what Moyers and his interviewees discuss and what is going on in the nation today. Whenever Moyers and his interviewees discuss just how far our current government has strayed from the Constitution, it’s hard to remember that they’re talking about the Reagan- and Bush-era government. Whether or not it applies today is moot; there’s not a lot of room for current audiences to agree or disagree with these statements (Perhaps that’s why the set includes “Updates on the Participants” on every disc as a bonus feature).

However, when it turns its eye to history, In Search of the Constitution is quite good. There are long discussions about the Founding Fathers, who I personally enjoy learning about. There are a lot of historians discussing the Constitutional Convention, and though the camera only shifts between their face and Moyers’s, it’s pretty gripping stuff.

The four-disc-set contains eleven episodes, as well as a nice little booklet about the set. Is it worth the money? Well, that depends on just how much you like learning about the government. If you’re a history junkie like myself, you’ll probably love it. If not, maybe A World of Ideas – Writers is best for you.

You can order In Search of the Constitution from Amazon for $79.99.