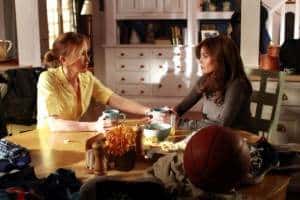 The final season of Desperate Housewives promised to be “full of surprises” and I have to admit, for as much as I’ve been able to call most of the plot twists and “reveals” over the past eight years, I admittedly did not see tonight’s shocker coming – nor did I expect so many questions to be answered before the end of the series. I suppose that means there must be more on the way, and with only 7 new episodes remaining, I can only hope Marc Cherry has something good up his sleeve.

Let’s recap, shall we? Last week saw the surprise arrival of Orson, Bree’s ex-husband who saved her from a drunkard and helped her get back on her feet. We started with Bree and Orson’s catch-up, Bree telling him “you really are a good friend.” She adds that he’s the only one and Orson is surprised, since he knows the four girls to be inseparable. Bree says that a few months ago something happened that caused them to have tension with each other and when Orson tries to pry the information out of her, Bree admits the whole story. Meanwhile, Porter and Preston return home and tell Lynette that they’ve been evicted from their apartment. Lynette attempts to stop them from moving back in, but the boys manage to pry their way back into the house by telling Lynette they don’t like Tom’s new girlfriend.

Susan is helping Julie search families on the adoption agency website, but Julie gets upset when Susan becomes too controlling. Susan tells Mike she wishes there was something she could do to stop Julie from making this decision, and ends up suggesting that they find the father and get him to step in. Mike tells her that’s a bad idea and if she doesn’t stop pushing, she’s going to lose Julie entirely. Is Susan going to listen? Eight years have taught us to be doubtful of this. Meanwhile, poor Gabrielle realizes that between trying to keep the house together, managing Carlo’s job and keeping the kids happy, she’s losing her mind. On a park trip, she sees Roy who tells her that Karen kicked him out because they had a massive fight. Having no place to go, Roy sweet-talks his way into staying with Gabrielle, who reluctantly agrees.

The girls pay a visit to Bree but meet Orson instead, and after hiding their surprise at his return, Orson tells them about Bree’s bar fight and how he saved her. He says he’s spending some time with Bree to get her back on her feet, but that she doesn’t want to see her friends right now. Knowing how their last conversation went with their friend, the girls don’t push but instead ask him to tell her that they’re here for her. Orson promises he’ll do so, but when he goes back inside, he doesn’t tell Bree anything. In fact, he seems perfectly content to push Bree further away from her friends as long as he can have a place back in her world. 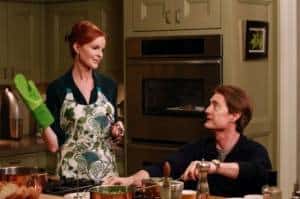 Ben, who’s still having problems with money (as well as everything else in his life) tells Mike he started a fire so he could get a settlement from the insurance company. In the middle of his explanation, he begins experiencing chest pains and lands himself in the hospital. Mike visits Renee to alert her, telling her that Ben is under a lot of stress the loan shark he’s in trouble with. Renee ends up visiting Ben and offers to help him get out of trouble, but Ben refuses to take her money because he still feels terrible for what he did to her.

Susan, meanwhile, goes to visit Lynette. Hurting over Julie, she ends up spilling the beans on the pregnancy and Preston and Porter overhear, despite Susan trying to downplay the news. When Susan gets home, she overhears Julie talking to the father and making plans to meet him. She follows her to spy so she can see who the father is for herself, and finds out that it’s actually Porter Scavo. After flipping out on both kids, Porter admits he wants to keep the baby, which causes Susan to take his side immediately.

Gabrielle is having a hard time living with Roy because of his odd habits and when they talk about how to get him back to Karen, Roy doesn’t seem too hopeful given the magnitude of their fight. Gabrielle tries to force him to leave, but when he proves he can get Juanita and Celia to listen to him, she sees an easy way out of a stressful situation and invites him to stay. The easy out works a little too well, and soon Gabrielle is telling Carlos that he doesn’t even have to come home to help out even though his counselor has granted some time off. Carlos, however, is (like the rest of us) more concerned about what drove the happiest couple in Fairview apart.

Bree is enjoying having Orson back in her life, even going so far as to tell him it’s as if their past never happened. Hearing these words, Orson takes a leap of faith and asks if Bree has thought about a change of pace” – a new chapter in her life. He suggests going to Maine together, first as a vacation and then a permanent move. Bree is tempted, though hesitant, knowing the importance of her life in Fairview and her relationship with her friends. In fact, she tells Orson, she’s thinking of making up with them because she feels their fights have gone on long enough. Orson panics, knowing that Bree’s relationship with the girls could end his happiness and spins a lie about how the girls came over but didn’t seem concerned about her. This seems to sober Bree, who starts to think twice about reconciliation. 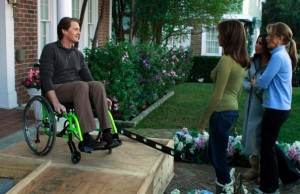 Gabrielle, meanwhile, is spinning lies of her own for her own benefit. While she’s quite content having Roy live with her, Roy greatly misses Karen and wants to figure out a way for her to take him back. Gabrielle convinces him she’s still too angry to take him back, and then tells Karen the same thing. We eventually find out that Karen has been hiding a secret from Roy – her cancer has returned, and has spread to her brain. The doctor mentions she’ll need support, but Karen tells him sadly that Roy is out of the picture. Not wanting him to go through another death of a loved one, she tells him its better that they’re now separated. I can’t help but think this won’t end well, and I can only hope that Karen gets at least a fitting storyline for the end of the season as she’s been such a terrific and underrated character for so many years.

Susan invites Lynette over to tell her about Porter being the father of Julie’s child. Lynette understandably freaks out, especially when she hears that he wants to raise the baby. When she talk to Porter about the situation, he admits he knows he’s not ready for this but that he IS ready to do whatever it takes to make sure he’s a good father. Susan’s talk with Julie doesn’t go as well – Julie wants to forget that this situation ever happened, and doesn’t want anything to do with the child. Susan tries to explain how Julie will feel once she has her baby, but Julie is still upset with Susan, saying she feels Susan took away her decision and that she’ll never forgive her for what she did. Looks like Susan should try to listen to Mike more often.

While Renee takes care of Ben’s loan shark and encounters a rather uncomfortable situation, Orson and Bree pack while Bree asks what made Orson change his life around. “Driving,” Orson answers simply, as he explains how freedom helped him to let go of a lot of pain. We then are treated to a huge amount of reveals – Orson watching the girls from the car as they carry out Alejandro’s body, leaving notes in Bree’s mailbox, spying on where they dug the the grave. Man, Bree’s having a pretty bad season, isn’t she? Never one to have good luck with men to begin with, she broke Chuck’s heart at the beginning of the season which resulted in turmoil and near death, and now is being possibly set up for something worse from Orson who clearly has it out for her (though for what reason, other than angry revenge, we haven’t been told yet.)

I had my doubts about Orson’s sincerity once he lied to Bree about her friends. Still, I have to hand it to Desperate Housewives, because for as much as I tend to complain about how obvious their “big mysteries” are each season, I was pleasantly surprised and caught off guard with this one. I’m really looking forward to the final few episodes and seeing how this wraps up. What exactly is Orson’s motive? And does he plan to take ALL the ladies down with him, or is this season going to be a strict focus on Bree herself?

What did you think of the episode? Are you ready to count down to the final hours of the season? 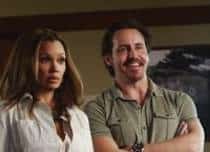 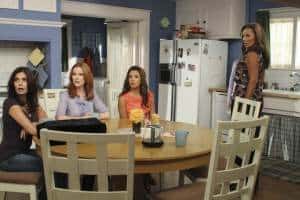