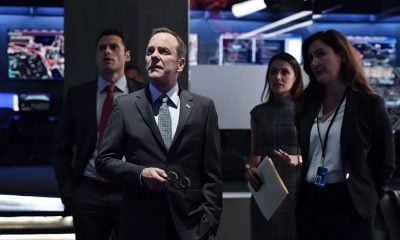 We thought Designated Survivor would have a difficult time recovering from the terrorist attack which tore the country apart. It turns out that rebuilding is even harder. On the one hand, the President deals with a quite literal outbreak that could quickly become a national crisis. But the title of this week’s episode is deeper, regarding information that could cause a huge emotional outbreak for the Kirkman family.

There is an unknown virus quickly spreading into the population, one that could reach both ends of the country within 72 hours. Kirkman, Aaron and Emily are in a mad scramble to get a vaccine to the affected areas. They do this against opposition from a drug company intent on selling the vaccine to the highest bidder, when 95% of the cases are in poor areas. They claim capitalism, not racism, is their reason for not releasing the medicine, and later not disclosing the true amount they have in stock. The end result remains the same. Poor people are dying from a disease that could be cured if they just had the right medicine. President Kirkman personally checks in with the lead physician every other hour to save as many lives as quickly as he can, and she ends up in the hospital for testing the dosage out on herself first. It’s no wonder the President is infuriated. What pushes someone only concerned with money to do the right thing? Bad PR, every time.

Kendra Danes is earning her keep her first week in as the new White House Legal Council. Not only does she fight for the vaccine to be distributed, she gets both sides of a Confederate statue argument to come to a compromise. That’s a tough sell to a Reverend who believes removing such monuments is whitewashing painful parts of American history. The good reverend becomes a friend to the White House, which frees him up to help the President with the vaccine issue. Kendra may be exhausted, but she does pull off a lot. More importantly she becomes a cog in the wheel that moves the conversation on racism forward. Intolerance is not gone, and we wish we weren’t still talking about it, but at least we try to move things forward. After a stressful few days, you know what brings a smile to Kirkman’s face? A South American tree frog named after him.

Hannah doesn’t settle for easy answers. It doesn’t sit right with her that they don’t know why Patrick Lloyd broke into the President’s mother-in-law’s house. During a walk through of the crime scene, Hannah finds insurance documents relating to the First Lady’s late father’s heart transplant. Lloyd wanted her to know this information, but was not going to make it easy for her. Every turn she and Agent Rennett take literally puts them in the blast zone. Their quick actions get Rennett booted from the country, and set Hannah on the path to look deep into the First Lady’s family. The gist of it is that it looks like the woman made a deal with the a hospital board member to get her husband moved up the transplant list. At best, this is simply illegal in terms of bribery. At worst, it could be a nightmare if it got out to the press. Time will tell what Lloyd’s intentions were.

Is Patrick Lloyd speaking from beyond the grave? Kendra may look like she’s the ‘working dead’, but she is a master at her job. Tune in next week to learn exactly what the President’s mother-in-law has done.

The President tries to prevent a pandemic, not knowing there is a disaster headed towards his family, on the latest Designated Survivor.