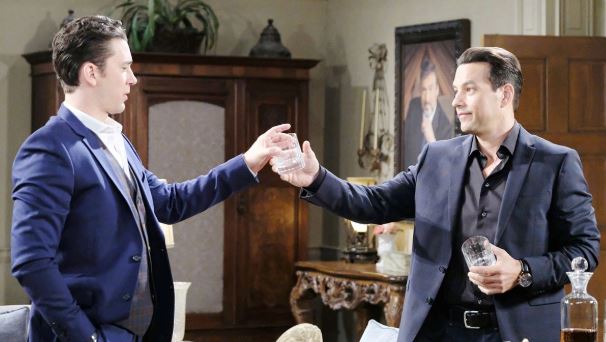 Days of Our Lives fans are no strangers to people coming back from the dead. It happens a few times a year, and it almost makes us not even blink when someone dies. It’s like, “Sure, they’re dead. Today. They’ll be back,” but it almost seems as if it’s only been beloved characters who crushed people with their deaths that are coming back. Will and Jack, for example, are both men that everyone loved and hurt for when they died. And they came back. You don’t see many villains dying and coming back as much as you see people we all know and love. But, that doesn’t mean they’re not coming back. In fact, we have a strong feeling that there might be more people coming back in 2019 — and they’re not all good. We think there might be a few villains coming back from the dead.

She’s a nasty character, and we want her to come back. She did die this year when she was killed and made everyone feel comfortable in her loss, but we think that it’s all about balance. She is the mother of a young man who just showed up in town and literally has not one fan or friend right now other than Gabi — and even she is only using him. Viv is going to show back up to be there for her son, we can just feel it. She shocked everyone when she brought Stefan into the picture last year as the long lost and unknown brother of Chad, and now she’s going to show back up and further irritate just about everyone in Salem except for her son. But, when this happens, will he know that she’s alive and well and hiding out, or will the news that his mother is alive and well and back in town shock him along with everyone else?

You can love him, you can hate him, and you definitely miss him. He’s a thug and a mean man, but he’s one we miss. He died last year, too, and it was his death that launched all the ships that came into play last year. Had he not died, Abigail’s alter ego would not have emerged and worked so hard to blame Gabi for it. She wouldn’t have spent half her year in prison, Abby wouldn’t have thought that the baby she was carrying was Stefan’s baby, and her marriage would have never suffered. The only actual thing worse than any of that is the knowledge that it did all go down for literally nothing because he was not dead. And we are big fans of that situation. So, is there a chance that he is not dead and that this did not happen for any good reason, and that he is out there doing something awful and horrible and even working with others in Salem in the meantime? We think there could be a chance, but we aren’t entirely certain there is a chance. We would love to see him come back though, but probably not nearly as much as Kate.

He’s been dead for nearly three years now, but that means nothing. He was perhaps one of the worst villains of all time around here. He did some of the worst and most horrible things to the people of Salem, and we all know that he’s been dead more times than we can count. He is a man who might not always die when we think he does, but he’s been gone a long time since. Is there a chance he might come back now that he feels that it’s safe without Steve and other characters around to stop him from doing what he feels is the work he needs to do? With Stefano dead and gone — and we do know that Stefano is one villain who will never come back thanks to the fact that the actor who played him his entire life passed in 2017 — is there a chance that this guy might show up and make a big scene with someone? We hope so, because he’s one of our favorite villains of all time around here.