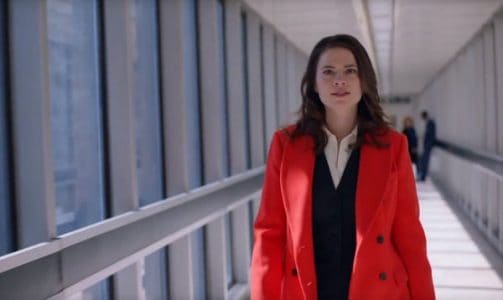 Conviction’s pilot opens with Hayes Morrison (Peggy Carter herself, Hayley Atwell) sitting in a jail cell after being busted for cocaine possession. She’s particularly chill considering her situation and it certainly looks like it’s not the first time she’s been detained. We quickly learn that Hayes is the former First Daughter, a tittle that she might claim once again since now it’s her mother, not her dad, running for President.

Even though Hayes seems ok embracing her orange is the new black future, in walks D.A. Conner Wallace (Eddie Cahill, who has aged like fine wine), who offers the wild child to make her possession charges and arrest dissolve into thin air before her scandal hits the news, only if she accepts to lead his new Conviction Integrity Unit (CIU).  Hayes refuses to be blackmailed at first, and calls Conner out, claiming that because he eyes a political future, he wants her to do New York’s Criminal System’s dirty laundry. That way he’d look like a respectable, responsible candidate, while she would be making people mad.

The interaction between the D.A. and the former First Daughter is highly entertaining. They’re both sharp, and take no prisoners. Regardless of the fact that one of them is behind bars, it’s easy to receive them as equal powers, which dangles a threat from the get go.

After some back and forth, Conner finally hits a nerve when he tells Hayes that her legal troubles would affect her mother’s career. She finally caves and takes the job. An announcement is made and we are on our merry way to meet the brand new CIU.

First, Hayes meets Sam Spencer (Shawn Ashmore), who was supposed to get Hayes job but instead not only has to follow her command but also, play double agent. Conner promises him to be by him when he runs for mayor. It’s a nice bait and switch to say the least. That said, Sam is obviously the wild card here.

The most memorable introduction is by lead investigator, Maxine Bohen (Merrin Dungey), whose first words to her new boss are “I didn’t vote for your father.”. Far from taking that as an offense, Hayes is fast to add that neither did she. And here we have a new frenemy dynamic.

Rookie paralegal Tess Larson (Emily Kinney), who is on her own quest to redemption, and Frankie Cruz (the beloved former Gracelander Manny Montana), an ex convict who specializes in forensics, round up the diverse team.

The brand new team gets their case. They have to look into Odell Dwyer’s murder conviction. The court has found him guilty of killing his girlfriend Anna, 8 years ago. While the team is somewhat eager to start on their first case, Hayes pretty much decides that she will let them do all the heavy lifting while she will coast along, which doesn’t sit well with anyone, and vexes Maxine. At the same time, Hayes behavior is believable. She didn’t want the job in the first place.

While the CIU members talk to Odell and look into the evidence that got him convicted, Hayes tries to get fired. She snorts what she is trying to pass as coke but in fact is sugar in Conners office but he reads her well and calls her bluff. Again, the two sizzle when they share a scene. However, for the second time, Conner has the upper hand and Hayes is stuck with a job she doesn’t want.

Meanwhile, the team try to piece the timeline of the crime, while looking into the little evidence that got Odell behind bars. Though there was not much physical evidence, Anna  had written in her diary that a “he” (that everyone assumed was her boyfriend) scared her.

Hayes heart is in the case after she meets with Anna’s mother (Marisol Ramirez), who is not only convinced that Odell killed her daughter, but is also, distraught that the CIU is looking into the case: it opens her wounds. What is significant about the scene is that the grieving mom is the first one without a hidden agenda and who really gets to Hayes. Also, since the woman lost her daughter, and Hayes seems to have a conflictive relationship with her own mother, it is easy to see why the new CIU leader decides to get into the game instead of being a tittle boss. Another highlight of the words that the two women have is that Hayes speaks to Anna’s mom in Spanish, and pretty decent Spanish, which, trust this Latina, is hard to see on TV.

After talking with Anna’s mom, Hayes decides that what matters the most is justice, therefore, she is now ready to look into the case impartially. She is not just looking to exonerate Odell but to find out the truth.

A lot happens. 1. Maxine, whose instincts are dead on right, finds out about Hayes’s now gone coke possession charge, 2. Hayes is confronted by Odell’s mother (a lot of mothers in this episode!) who also overhears how Hayes got her job and the woman is not only outraged about Hayes white privilege (she got a job BECAUSE she got busted with drugs!), but mostly, the woman is upset that someone as reckless as Hayes is in charge of maybe exonerating her son. 3. Hayes finally meets Odell, and believes he’s innocent.

There are many twists when it comes to the investigation. Every time one piece of evidence suggests Odell is guilty, something else exonerates him. There is the timeline, his steroid use, the time of the killing, and ultimately, the entries on Anna’s diary. Ultimately, in a somewhat rushed manner and via relating with the victim, Hayes figures out that Anna was using a code to write on her journal, in case her mother would read it. It turns out the “HE” did not refer to Odell but to Hector. With a new suspect, Odell’s sentence is overturned.

Conner is happy about the outcome of the team’s first case, however, Hayes visits his office once again. She is now ready to fully take on her role at the unit, but wants the man that she will do things her way. He can’t blackmail her anymore. Tables have turned. And speaking of tables… the show closes with Hayes staring at piles and piles of cases on the CIU’s desks. It’s on.

Conviction’s pilot does a good job at introducing the characters. I might add that the series displays smart casting: there isn’t a single actor in the CIU who doesn’t have a solid fan base, not to mention that everyone’s charisma pops; especially Hayley Atwell’s, who we KNOW is capable of being a compelling lead.That said, the first hour of the show tries to do too much in little time, and by default, the case of the week did seem very rushed.

All in all, I believe Conviction has the potential to earn its audience, weather or not the pilot did enough, jury’s still out.

Conviction has the potential to earn its audience, weather or not the pilot did enough, jury’s still out.