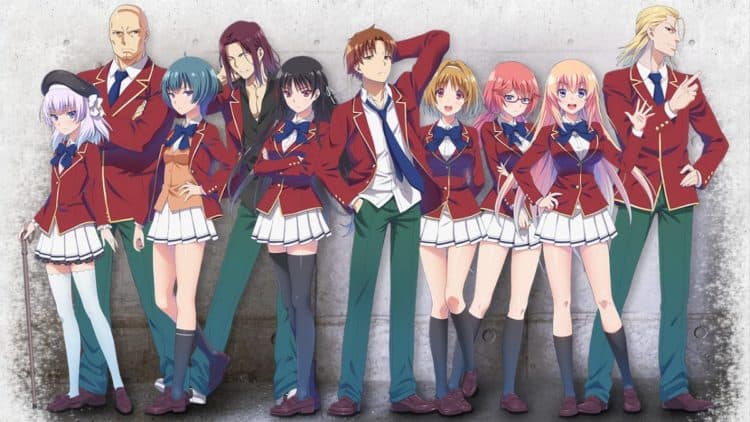 Classroom of the Elite is a wildly popular anime series based on a series of light novels using the same title. For some time now, people have been wondering if the series, which has only had one season so far, is going to get a second season. Find out more information about it below.

In order to have any type of viable story, you have to have something that is compelling. Classroom of the Elite definitely has that element locked in. The plot centers around a group of school-aged children who find their way into one of the most prestigious schools in the whole country, only to learn that things aren’t always as they seem. In fact, they soon learn that there are a lot of corrupt and even covert things taking place at the school. Before long, they start to discover that the way people advance to the top level in the school is by essentially sabotaging anything and everything they can get their hands on. The entire time, they believe that they’re supposed to be striving to climb the ladder and get to those upper classes, only to find out that it is the exact opposite of what they truly want. The thing is, no one outside of school knows anything about it. They are then faced with the moral and personal dilemma of how to go about putting a stop to such things when they are acutely feeling the pressure from the outside world to advance through the ranks. That sounds like a story that virtually anyone would be interested in seeing, and is in large part responsible for the overwhelming popularity of the show, despite the fact that it’s only aired for a single season so far.

What About Season Two?

Studio Lerche is responsible for the production of the show. It’s worth noting that it’s been four years since season one aired. While it’s not outside the realm of possibility that something can be revived after that long, it’s becoming more and more unlikely that the second season will ever actually happen, especially as time keeps moving forward. Perhaps the most telling thing is the fact that there has been absolutely nothing said about the project since the first season ended. It’s almost as if the studio simply isn’t interested enough in the project as a whole to give it a second thought.

Looking at the Big Picture

Since there is virtually no official news about a season two whatsoever, some fans have even taken to looking at potential profits that could be made if it were to occur. After all, this largely determines the likelihood of whether or not the studio would even entertain the idea of doing a second season. There is no doubt that the light novels the series is based on are popular enough in their own right. If they hadn’t been, the series never would have been based on them in the first place. That said, the series itself didn’t do as well. There was a big marketing campaign behind the series, all in the hopes of boosting sales of merchandise, thus further increasing the overall profitability of the entire story. While the series seemed to do well enough as far as viewers were concerned, no one really seemed interested in buying any merchandise as a direct result of its existence. As such, profits from additional merchandise sold were extremely low. This is a rather ominous indicator and may very well be the reason that studio executives haven’t had anything to say about the project since the end of the first season. It could be that they are simply not interested in pursuing this particular project any further, even to the point of declining to make an official comment about it one way or the other. While nothing is certain, the argument could potentially be made that they are interested in moving on to other things and have effectively done exactly that.

Getting to the Bottom of Things

At the end of the day, it comes down to this. The show was fairly relatively well-received, but upon closer inspection, the majority of the fans came from the West. In Japan, there was almost no interest in this series whatsoever. As a result, the studio probably doesn’t see much of a point in continuing on with it. This is especially true when you consider the fact that the targeted audience was the Japanese audience to begin with. As a result, most people simply don’t expect that a second season of this particular show will ever come to fruition.

Despite the fact that it looks to be highly unlikely that a second season will ever occur, there are still a few fans that hold out hope that something could change in the future. As previously mentioned, it isn’t outside the realm of possibility. However, it’s definitely not going to make the list of things that are likely to happen in the near future, either. In fact, it might take a rather big push from fans of the first season to get the studio’s attention long enough to even make them remember that they had a first season. Even with all that, there is still no guarantee that anything productive will ever happen as the studio moves forward with other projects. As a result, it seems rather unlikely that this particular series is going to continue on. Fans may have to read the novels and leave it at that.

Granted, this probably isn’t the news that dedicated fans of the series want to hear. Nevertheless, it does seem to be the way that things are heading. At the moment, fans are relegated to watching reruns of the first season and reading the light novels. In fact, anyone that wants to see how the story plays out can read the novels, as previously mentioned. Unfortunately, it doesn’t seem like there is a great deal of hope that the story is going to come to life on the television screen anytime in the near future.