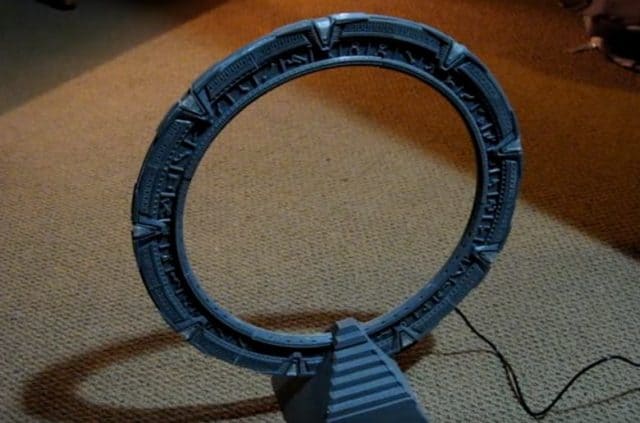 3D Printing is definitely becoming something that more and more people are starting to hear about and learn about as time goes on. The process is supposedly simple enough to explain as it involves creating a 3D version of something by layering material in cross sections that are bonded together to form whatever shape is desired is fully constructed. It might seem like something out of science fiction but it is very real at this point. Even more impressive than that however is that someone has taken it upon themselves to recreate the famed Stargate from the movie and make it actually work.

No, it’s not going to transport anyone to a different dimension run by maniacal Egyptian deities, but it does manage to dial up as it continually rotates and lights up each node along its circumference. The engineering needed to complete this is pretty impressive to say the least and escapes my otherwise artistic mind. I can definitely see the how of it but the intricacies that go into the construction of such a thing are still a little too confusing to contemplate unless you’re into this sort of thing or practice it on a regular basis.

It does take me back to watching the original film however and being amazed at the technology that special effects had created. Just imagine a doorway that could open up between dimensions and what it would mean for the human race. There are a lot of different applications that would be considered of course and not all of them are positive, but it could possibly mean the difference between over-population and a means of expanding to another world where humanity might finally get things right. The escapist aspect of it makes the whole thing seem a little less than positive but the fact is that if a Stargate was real and could be applied in various ways then it’s very likely that the military aspect of it would come first and all other things would come after.

To be quite honest it’s probably for the best that a working Stargate doesn’t exist and at this time has no chance of existing simply because humans don’t always know when to leave well enough alone. The pioneering spirit that causes us to reach ever outward, upward, and to seek a new horizon can have its good qualities, but it can also be our downfall when wisdom isn’t applied on a regular basis to temper the more ambitious tendencies that humans have in droves.

Still it’s an interesting idea if it would ever work, at least enough to think that if such a thing existed that it might lead to a future that we could actually embrace. As it stands now this device is kind of impressive since it obviously took some skill to design, develop, and then piece together so that it could actually perform the function that the creator intended it for. Those that have this kind of skill and whose minds work in this manner are easy to envy at times since the ingenuity of it is simply amazing.