Home
Entertainment
Canadian Rambo Statue Gets Erected In the Town of Hope, B.C. 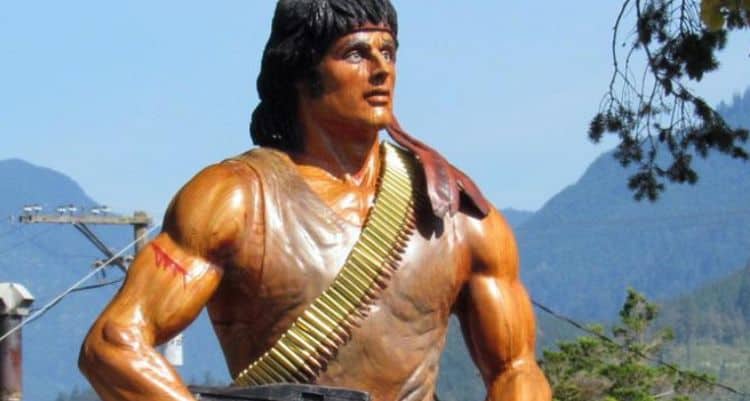 The citizens of Hope, British Columbia have something nice to look at apparently since a Rambo statue was just erected in the town not long ago. If anyone remembers, and plenty of people do, this is the town where John Rambo took on the law and won the battle even though he was carted off in custody at the end of the movie. Sylvester Stallone even gave his approval before this statue was placed in the town, which isn’t that surprising since it pays homage to the iconic movie, much as the Rocky statue in Philadelphia does. On one hand, both statues are able to give the people that live in each location a sense of pride and can serve as tourist attractions. This is particularly true in Hope since there’s a tour around the area that allows fans to see just where some of the most iconic scenes were filmed. On the other hand, the fact that certain statues are able to be glorified while others need to be torn down apparently feels like a lot of hypocrisy, the same type that’s been spread throughout the nation for a while now. But getting away from that thought let’s just say that despite the mixed feelings, the statue is a work of art to be certain and yet is still an odd point of pride in a small town since one would hope that they might have something to be proud of other than being the location where a movie was filmed. But hey, if you don’t live there then knocking it is a bit disingenuous.

This is enough to make a person wonder if the artist is simply paying homage to the movie or to soldiers with PTSD or if it’s just something that someone thought would be a good idea to put on display. After all, various other cities and towns have their claim to fame thanks to the movies. The idea that Hope could capitalize on this attraction isn’t bound to be something that rakes in the millions, but it is still an impressive landmark that people might talk about for a while. One of the only downfalls is that once a person has seen it there’s not much else to say other than what inspired it, which is kind of obvious, and whether rit’s going to last. Anyone that knows what Washington weather is like will be able to tell you that the statue could last and its color could hold up for a while, but if it’s going to be left out in the elements then it’ll need a touch-up now and again, and after a few years it’s likely that what looks so impressive now won’t be quite as impressive then. Of course, that’s if those in charge don’t perform the upkeep, since if that measure is taken then of course it can last for a while. Considering how long the statue in Philadelphia has been around it could be that Hope will be able to hold this symbol up in their own way for a while to come.

The Rambo movies have been a huge part of pop culture for decades now, and while a lot of people might feel that the last movie could have been a fitting end it does appear that Stallone might be up for making another one. There are bound to be plenty of groans and moans over this but there are still a lot of people that feel Rambo has more of a story to tell and that his end shouldn’t come as it supposedly did at the end of Last Blood. The only thing is, the title is LAST BLOOD, meaning that hopefully, just hopefully, it would be the last in the series and would allow the guy to finally rest as a lot of people figure he’s earned it and should be able to just go on his way and either live out his life or finally breathe his last and be content that he did the right thing taking out the bad guys and avenging the person he cared for in the process. But it doesn’t appear that this is going to be the case since somehow, someway, there appears to be a chance that Stallone can make this into a moneymaker again and get people on board with seeing Rambo in another ‘last’ outing that might hopefully actually be the last.

There’s a time and place for everything when it comes to movies and while this statue commemorates the beginning of a great action hero it does feel as though there might finally need to be a final act that will send the hero off for good and let him rest finally. If nothing else it would be interesting to see what else Stallone could do with his time once he’s done with Rocky and Rambo.