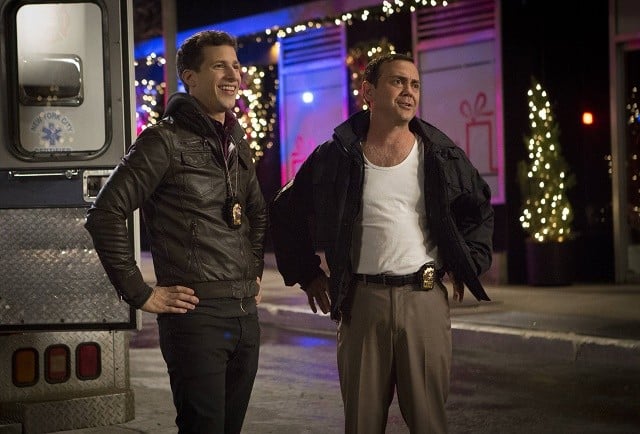 Every once in awhile a show will pay homage to a movie that I’ve never seen before. It’s almost always a highly popular movie that the majority of the world has seen yet for some reason I’ve never sat down to watch. My point here is that even when doing homage episodes, like the one Brooklyn Nine-Nine aired last night referencing Die Hard, it’s important that the episode still works for those few weird people like me who have never seen the original. As someone who represents that small fraction of the audience, I can say that, without a doubt, this episode still did work.

When Jake realized just days before Christmas that he had yet to buy a present for Boyle, Gina immediately offered her assistance in helping him find something, a nice reminder of the strong friendship these two have had since they were kids. Knowing that Boyle would be devastated if Jake got him nothing, they made a plan to go to the store that night. Unfortunately for them, Boyle overheard them talking and Jake quickly had to make up an excuse, claiming it was Amy who he had forgotten to get a gift for. Being the good friend he is, Boyle too offered to go shopping with him, paving the way for the three to find themselves in a very Die Hard Christmas shopping situation.

Arriving at the store just as it was closing, they had to sneak in the back (Jake offering to shop so fast that he wouldn’t even pay did not get them in), only to discover that the store was being held up. Now, from what I understand, this plot of being held hostage by criminals during Christmas time is right out of the movie they’re referencing, and despite never having seen said movie, Jake’s enthusiasm and constant references throughout the episode almost made me feel like I had seen it.

From Jake’s disappointment about the bad guys not having cool accents, to Charles bursting through the vents to save the day, yelling “Yippee Kayak Other Buckets,” this episode had plenty of referential comedy that worked even for those who never saw the original (and it helps that Boyle had clearly never seen it either). In fact, in terms of overall comedy, I’d go so far as to say this was Brooklyn Nine-Nine‘s best episode of the season.

At the same time, we were able to see some nice character moments from both Terry and Amy. While Amy was off with Holt and Rosa trying to prove she had the guts to walk into the freezing cold ocean water during winter, Terry was left to deal with the hostage situation from the outside. Being in communication with Jake, he knew that they had the situation handled and had to work hard to ensure that the Vulture, who was technically in charge, didn’t ruin their plan. Terry was willing to risk his brother in-law’s opinion of him, leaving the family Christmas dinner early to help, as well as his own job by clearly breaking protocol and going against what the Vulture wanted, just to help Jake, Gina, and Charles. He took on a leadership position, which didn’t go unnoticed by Holt, proving that maybe he should look into advancing his career even further.

For Amy, her defining moment in the episode came after she chickened out on going into the water with Holt and Rosa. When push came to shove, though, and she finally looked at her texts from Jake informing them about the hostage situation, she didn’t even think twice about running into the water and alerting the other two so they could get back and help. While Amy might not like to take risks, she is willing to do anything for her job and for the people that she cares about, one of the many reasons to love her.

Overall, Brooklyn Nine-Nine‘s Christmas episode had a lot to offer and delivered on the great quality we’ve come to expect from this show. It was a fantastic episode to take us into the mid-season break, as it satisfied in terms of both story and comedy. Referencing a well known movies like Die Hard is always a bit of a risk, but in this case, the risk paid off in a great homage episode that even those who hadn’t seen the movie could truly enjoy.