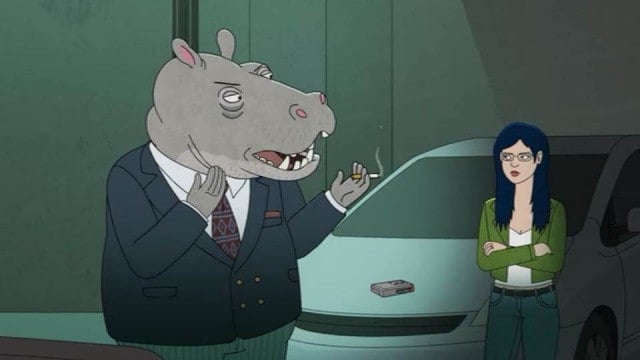 “Hank After Dark” is an incredibly bold episode of television, one that effortlessly integrates its running stories into a very pointed, scathing observation about the power of popularity in Hollywood, and how powerful men have used that influence to their advantage throughout history. In a series full of disappointment, anger, and depression, “Hank After Dark” might be the darkest episode of BoJack Horseman yet, 25 minutes that transcend slapstick and satire for something much more poignant.

The relevancy of “Hank After Dark” is obvious, given the recent Bill Cosby fervor, and yet it’s kind of a story that is always relevant, dipping into the sordid corners of Hollywood history for a serious examination of the industry’s morality as a whole. While on a book tour with BoJack to promote the paperback version of One Trick Pony, Diane makes an aside about Hank Hippopolaus (along with many others), Hollywoo legend and Mr. Peanutbutter’s colleague on Hollywoo Stars and Celebrities: What Do They Know? Do They Know Things?? Let’s Find Out! (or HSACWDTKDTKTLFO, for short), and the many allegations his former assistants have leveled at him through the years. Immediately, this becomes the hottest topic in town, overshadowing a massive (and probably accidental) genocide in the Cordovian war and sending the entire town of Hollywoo into a frenzy.

Of course, that frenzy is mostly aimed at getting Diane to shut the hell up. As “Hank After Dark” progresses, Diane watches as every door she thought would open by taking a stand closes in front of her (including a chance to write an article at Manatee Fair), and everyone in her life tries to get her to quiet down, lest they disturb the many careers and lives tied up in Hank’s decades-spanning success. As so often happens, the woman raising her voice to disturb the status quo is told to be quiet, each opportunity to exercise her right to free speech slowly closed around her (while Hank’s defenders spout off about whatever amendment it is that gives them the right to say and do whatever they want). First comes the attempts to absurd-ify the situation: news debates devolve into talking head nonsense, other famous people come out in support of Hank (including BoJack and Mr. Peanutbutter, if only in private), and the employers profiting off his presence shut down whatever news organizations are under their thumb/corporate umbrella, effectively silencing Diane and destroying her credibility as a writer.

Watching this all-too-familiar process happen to Diane gives an important intimacy to this story. Diane’s voice getting snuffed out in each, increasingly ridiculous scene of “Hank After Dark” is deliberately disturbing, right down to her own husband pulling away from her as a result. Even more impressive is how well it fits her character: the frenzy she causes not only further defines Diane’s stubborn nature, but it also reinforces her tendencies to do selfish things at the cost of others, be it BoJack’s public reputation with her book, or Mr. Peanutbutter’s life with her demanding ways and stubborn nature.

The most important wrinkle, however, is how BoJack Horseman frames Diane taking a stand. She does so reluctantly at first, knowing that she’s going to cause more trouble than harm from the word go, and that’s where the real commentary of this episode begins: most people in her position – or those in worse positions, having actually been assaulted by someone the public loves – already know its a defeatists’ task to try and speak up, the decades of Hollywood history and how easily it forgives terrible people setting a long precedent for where Diane would end up. She already knows she’s going to end up disgraced by the time things are done, but like most people would do, she fights against that inevitability with all the might she’s allowed to have, which ultimately ends with her on a plane to Cordovia to do her “dream” job, but no longer on her own terms.

It’s sad that an episode like “Hank After Dark” has to exist, but in doing so, BoJack Horseman takes an uncompromising look at how Hollywood has handled stories like Hank’s in the past, be it Mike Tyson, David Letterman, Woody Allen, Bill Murray, Josh Brolin, Christian Slater, Sean Penn – all named in the episode, a list that hardly touches the tip of the iceberg for stories of this nature (they could’ve continued with Charlie Sheen, Nicholas Cage, Chris Brown, Terry Richardson, Tupac, Rick James, and John Lennon, and still barely scraped the surface). There’s a long, disturbing trend of people forgiving predators in the name of “art”: Jerrod Carmichael’s bit about the release of R. Kelly’s “Ignition (Remix)” is a fine example that points out how willing we, both the American public and the Hollywood industry, are to forgive some while discrediting and shaming others – often from an uninformed or ignorant position. That message is powerful, and the image of a defeated Diane sitting alone at an airport being told to “smile” (the most casual form of misogyny) is also a powerful one, a devastating coda to one of the most scathing social commentaries I’ve ever seen in the form of a comedy. “Hank After Dark” is a very funny episode, but at the same time, it’s not funny in the slightest.