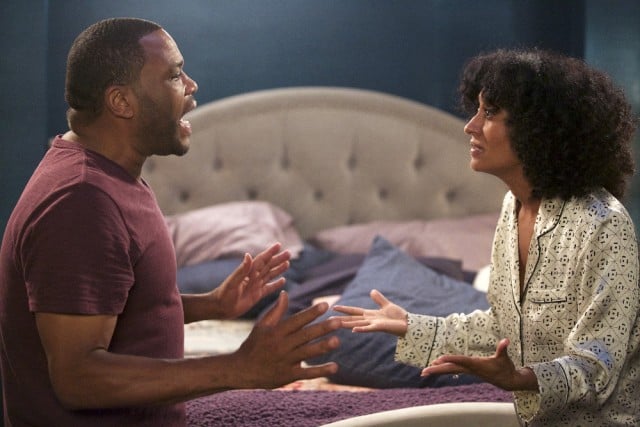 “Rock, Paper, Scissors, Gun” has the unfortunate task of airing a mere month after The Carmichael Show‘s own take on gun ownership in its season finale, “Guns.” More troublesome is that black-ish doesn’t have a whole lot to add to the conversation, essentially following the same blueprint of the NBC episode preceding it. Featuring a man who likes his gun and a woman who doesn’t, the path from premise to climax in “Rock, Paper, Scissors, Gun” is a wildly predictable one – but thankfully, one that never feels like it’s trying to preach its ultimate ideals about ownership.

There isn’t much surprise or poignancy to find in “Rock, Paper, Scissors, Gun.” We all know that the episode is going to end up with Dre being aggressive towards someone he knew (accidentally, of course) with his new gun – every show from Cheers to the aforementioned Carmichael episode have featured episodes with people blindly brandishing weapons, which puts the impetus on black-ish to fill the moments leading up to that with something intriguing. “Rock, Paper, Scissors, Gun” doesn’t really do this, save for presenting how gun-friendly the kids of America have gotten: they’re so desensitized to the debate surrounding guns, they’re immediately ready to pack up and leave when they find out their parents don’t own a gun, rather utilizing a dangerous, random placement of weapons (like nunchuks, a switchblade, and a shower machete) to protect their family, weapons I’m sure Dre knows how to use about as well as he does a gun.

If there’s anything interesting to be found in “Rock, Paper, Scissors, Gun,” it’s how cavalier the gun supporters take what’s presented as a very serious object in the final third of the episode. When shopping for a gun, Dre asks if he can get something that lets him shoot sideways, like a movie gangster – and later on, he decides that the safest place for the house gun to reside is with the borderline alcoholic with gambling problems (who has already been shot once before, by his own wife), hardly the kind of life-affirming solution to the debate that the episode thinks it is. Maybe I’m picking things apart, but on the heels of such a great episode like “The Word,” it feels like black-ish could do more than present this straw man debate between the need for protection and Bow’s paranoia about it being used the wrong way. In particular, the manner in which the episode tries to justify it all strikes me as among the most regressive statements I’ve ever heard on this supposedly “progressive” show.

Near the end, Dre justifies owning a gun by describing the fear he grew up with in the ghetto, where robberies and drugs were a stone’s throw away. This is a fine idea, in theory; however, deconstructing it reveals some pretty disturbing racial undertones, as this episode basically reaffirms the old cliche that “you can take a man out the hood, but can’t take the hood out the man.” While there’s no denying we are all products of our environment growing up, black-ish has mostly been about Dre’s slow realization that he’s no longer part of that culture anymore, and rather than continue to illustrate his growth, black-ish has him regress. It doesn’t matter whether Dre decides to keep the gun or get rid of it; either way, it’s the premise of the idea that bugs me. More troubling is how Dre attributes his desire to get a gun: to protect his sneaker collection (and his family). There are weird suggestions throughout the episode that Dre is very concerned with protecting his things, furthering the consumerist argument I’ve made about the show in the past, and how Dre’s conservatism fuels that through the series.

There’s just a lot about this week’s black-ish that either feels extremely familiar, or slightly off. This is an episode where Dre’s boss openly carries a revolver (incorrectly, I might add) at work, and where Pops makes a joke about his own wife shooting him (ultimately proving why he shouldn’t have a gun). There’s a very odd mix of tones (Jack and Diane are playing out Home Alone, while Zoey embodies the original The Karate Kid), ideas, and points of view that are shoved into this episode, without much of a reason beyond “ghetto life is tough, and impossible to truly evolve beyond” to justify it all. Does anyone else find this as weird as I do? 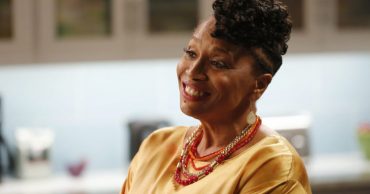 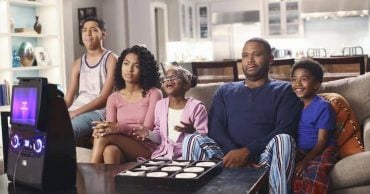 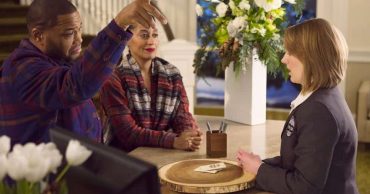 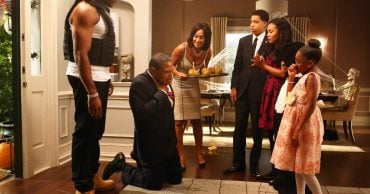 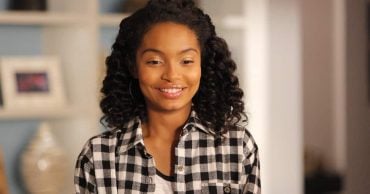 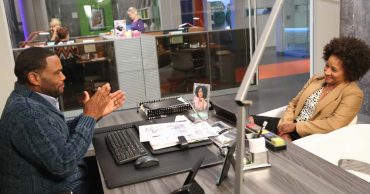