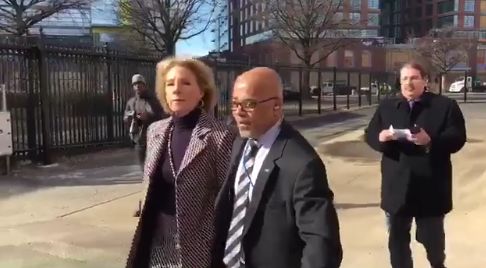 There aren’t many things in the modern day that mimic the style of Game of Thrones but newly appointed Education Secretary Betsy DeVos caught a little GOT wrath earlier today. In a tweet by ABC 7 News, DeVos was trying to visit Jefferson Academy in Washington D.C. when a crowd of protesters greeted her. They actually blocked the entrance to school not allowing her to even walk up the steps. The visit was organized by the teacher’s union, which says it wants to make sure DeVos knows they support public schools.

She’s come under fire for having zero connection to public schooling or the education field at all.  Chants of “Shame!” by one man are sure to make their rounds on the internet today.  Keep in mind that DeVos is only in her third day on the job.  This clip is fairly new so we’re pretty sure it’ll get around today.

At some point I would also assume that Donald Trump will have a tweet response using the word “shame” as well only he’ll direct it right at the teacher’s union.  You can check out the shaming below: