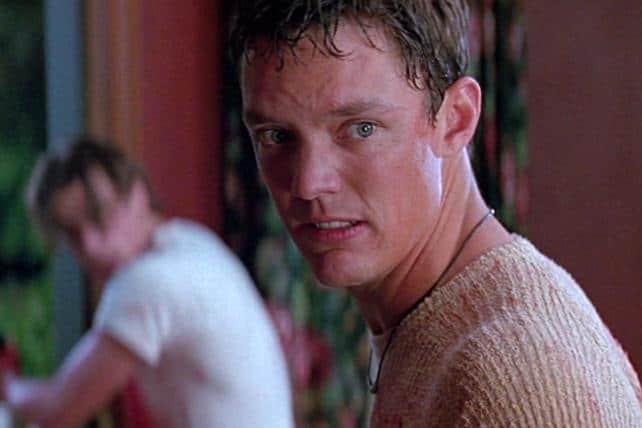 Matthew Lillard is without one of the oddballs of show business and before anyone wonders just where he’s been he has been around in recent years, but it would appear that his role as Shaggy has been taking up a lot of his time. That’s kind of regrettable in a way but still evidence that he’s valued in show business since he does have a purpose. But some of his earlier appearances are still among his best since he’s always had a certain energy that’s hard to say no to given that he’s the kind of personality that just kind of does things without anyone expecting it. In a big way his popularity went down after the teen films that he participated in, but like I said, he’s been around and he’s been doing his thing throughout the years. You won’t find me stating that his Scooby Doo movies are some of his best, but it was a bit difficult not to add SLC Punk or even 13 Ghosts on this list since despite the fact that both movies have been all but forgotten and, in the case of 13 Ghosts were considered to be kind of hokey, they were still fun in their own right.

Here are the best five movies from his career.

Philip French of The Guardian gives this film a pretty decent review when all is said and done, but one has to wonder just how much restraint it would take for a man meeting his wife’s lover to offer him one last chance to say goodbye. The fact that Matt does find Brian to make this offer instead of trying to knock his teeth down his throat indicates that Matt was very much in agreement that he wasn’t that great of a husband, no matter that he did try. It was easy enough to see Brian as something of a jerk since he was engaged in the affair just to have a little fun but eventually found that he wanted to keep his family together. Hell, even Brian’s wife managed to forgive Matt’s comatose wife, which was more than Brian could summon up.

This seems like one of those forgettable throwaway movies and you might be wondering why I didn’t toss SLC Punk in this slot, but honestly I think this was an adult coming of age story that was funny and a lot more important in a way. Jerry, Dan, and Tom are three men that grew up together as kids, and following the death of the friend Billy they decide to undertake a trip to find the fabled money that was stolen by notorious criminal D.B. Cooper. While there are a lot of glaring inaccuracies concerning the location and possible place where Cooper might have ended up, it’s still funny enough to entertain an audience.

Ah yes, when the teen movies were in they were IN. You’ve got to remember that this was a time when The Real World was still one of the more popular shows as well, which would be why the character of Brock Hudson, a very self-involved and overly egotistical character, made so much sense. To think that any high school senior would dump her all-star boyfriend for a guy like this isn’t all that hard to believe since Taylor was pretty much a fake herself, but it does invite a very satisfying number of moments in the movie when one comes to realize that as great as he seemed, Brock is kind of a waste of space. Plus, the fact that he dumps Taylor just like she dumped Zack is pretty funny.

This was one of those movies that probably should have been left as a one and done since it was great enough on its own and introduced some interesting characters even though it killed a couple of them off by the end. Stu was a guy that almost seemed as though he could be a convincing killer, but the moment he started squealing in pain after being stabbed, intentionally no less, it was apparent that he was a weakling that enjoyed the thought of mayhem but couldn’t really follow through on everything that came with it. Billy was a true psychopath, someone that would go to any end to get what he wanted. Stu was, to be honest, kind of a wuss posing as a badass.

Cereal Killer was by far and large the craziest character in this movie and that’s why he was one of the greatest. This was Lillard at his very best when he was younger and the character is one that a lot of people tend to remember when this movie comes up. Why you might ask? Well that’s simple, he’s the guy that has almost nothing to lose and the floater throughout the movie that’s there when needed and just kind of a pleasant nuisance when he’s not. He’s the buddy you can’t stand but can’t do without.

Lillard is still around, you just need to look.