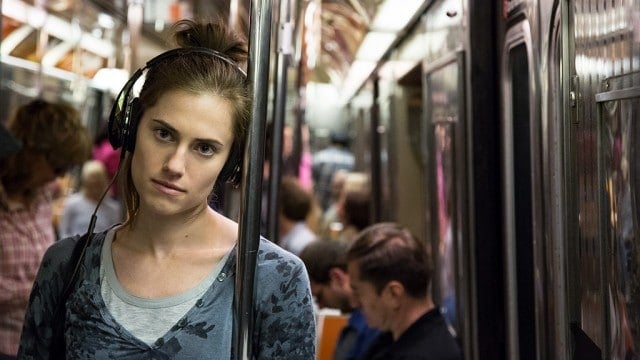 “Panic in Central Park” opens with Marnie actively trying to ignore Desi after the two had yet another fight. She claims she needs space while the hubby accuses her of being cold. This prompts both of them to lash out at one another and ends with Marnie fleeing the scene before any blood is shed.

Trying to clear her head doesn’t work at the subway, where all Marnie can focus on is a lovey-dovey couple kissing. As if things couldn’t get any worse, while walking on the street, she first gets cat calls, and then sees that one of the guys sitting along the cat-callers is none other than her ex, Charlie.  Marnie runs for the hills but he follows her. The least the girl needs is this encounter with someone who broke her heart, in what both, seems like an eternity ago, and just yesterday.

Marnie notices how different Charlie is and acts, yet Charlie argues that she doesn’t remember him well, then he invites her to come with him to an event, promising there will be champagne. In a strange turn of events, Marnie accepts, but they make a pit stop first. Marnie tries on dresses while Charlie suspiciously uses the bathroom in the place next door. In between, she makes the woman working at the clothing store privy to her past with him, a tale that is met with eye rolls.

Marnie and Charlie show up at the fancy event where he disappears. It is quite clear that he’s dealing drugs, which doesn’t seem to raise a red flag when it comes to Marnie, who, in turn, ends up pretending she is a prostitute and ends up scamming a rich man. Proud of this, she and Charlie leave the place and  enjoy a fancy dinner, courtesy of the man she just fooled. They eat, they drink, they even dance. They seem like they are meant to be, at least, for a little while. The two of them together, in this version, work, but we know they are on borrowed time.

Later on, the exes go to Central Park, where they borrow a rowing boat. They end up kissing AND falling into the water, which works as a great new birth for their relationship. Right after, they ride the subway, drenched and cuddling in silence. Marnie seems in her element even though she is in the complete different place where she, and us, imagined she should be. And that is when the question seems to jump out of the screen, where is she supposed to be? We don’t really know, don’t we?

On their way to Charlie’s place, they get mugged, which doesn’t disturb them nearly as it should and then Charlie’s beat up room, the two get intimate and even plot to run away. Marnie thinks out loud: she doesn’t need any of her belongings, in fact, she admits to hate most of her stuff. However, after she takes a shower, has a weird encounter with a jaded girl, and the sun comes up, Marnie finds a needle in Charlie’s pants. She asks about it and like a professional addict, he responds that he is diabetic.

Wearing the red dress and no shoes, Marnie returns home, where Desi is waiting, defeated. She apologizes to him and confirms what we’ve known all along but took her time to figure out: she doesn’t want to be married to him. Desi, at first, seems cool with them parting ways, but then tells his future ex wife that she will eventually get murdered.

Marnie, for the first time in a long while, is brutally honest. She needs to work through a lot, so does Desi, who is no longer her problem or responsibility. She also needs to figure out who she is and what she wants in life. ON. HER. OWN.

The episode ends with Marnie getting some of her things and joining Hannah and Fran in bed.

“Panic in Central Park” was a beautiful ode, not only to Marnie, but to the path she has traveled. To the boxes she’s checked while still not getting the answers she’s looked for. It was also a nice reintroduction and closure to Charlie’s arc, and the best ending anyone could think of for Desi. Once again, Girls reminds us what the show and its characters are made of.

Needing space after a fight with Desi, Marnie goes for a walk and has an unexpected run-in with someone from her past.