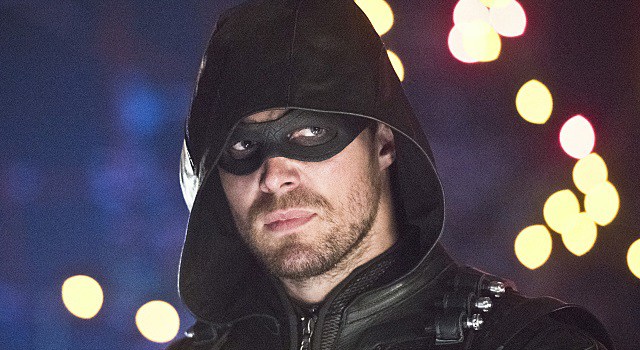 As Arrow begins to get closer and closer to wrapping up its fourth season, this week’s episode featured the return of Felicity Smoak’s father who has to help Team Arrow stop Damien Darhk’s attack against, well, humanity, while Thea continues to deal with the fresh new hell that she is stuck in after last week’s episode.

Let’s start with the most irrelevant part of the whole episode: the flashbacks (again). It’s beyond me what the point is anymore with these flashbacks because every time we cut to them, we spend maybe 10-15 seconds with Oliver and Taiana before cutting quickly back to the present. If you are going to use flashbacks as part of your storytelling, then you can’t possibly think that you can just cut back and forth between the two time periods when they only last for a few seconds. Either spend a good two-three minutes in the flashback or don’t include them at all. Not only does it distract you as a viewer with what is actually happening in said flashbacks, but there is no chance to build any attachment to them because it’s so abrupt. In addition, by having the flashbacks last for as little as they do, it feels a lot like an afterthought when in fact we know that since the inception of Arrow that these flashbacks over five seasons would be key to Oliver’s story. The only thing that intrigued me with any of them was seeing Taiana’s eyes glowing yellow which can only mean bad things to come.

Once again, it can’t be stressed enough how tragic it is that Thea is getting such limited storylines and not the best ones either. While I haven’t been too fond of Anarchy at all this season, his return in this episode kind of made me like the idea that he is in a way Thea’s personal villain. The ongoing drama between Thea and Malcolm however has run its course and needs to end already. Malcolm can keep singing the same old “Just Trying To Protect You, Daughter of Mine” over and over, but you know that his love doesn’t come for free. While Thea and Anarchy had a pretty dope fight, Alex gets killed in the end which I will admit was totally fine by me. I will never stop cheering for a Thea/Roy reunion because he was so good for her. Although I will give some points to Anarchy for his whole “You don’t need a man” speech because that’s so true. Who would have thought that someone like him would pull a good speech like that.

You know what wasn’t surprising in this episode, yet was totally a surprise? Felicity being terminated from Palmer Technologies for very understandable reasons, but the surprise is due to the fact that it took over 20 episodes for this board to make such a decision. Given how she is pretty most the most MIA CEO of all time, she is lucky to have had that job for so long. Although did anyone else think that that board member was perhaps working for Darhk as a double-cover? Either way, her getting fired just had me mostly chuckling because, well, it made all sorts of sense to the point where you weren’t really cheering for her. While I wasn’t too warm on Noah’s introduction at first when he made his debut a few episodes ago, I was able to appreciate him here a bit more. I’m calling it right now that he will turn faster than a speeding bullet on his daughter and the team, but seeing him actually bond a little with Felicity, was enjoyable.

What was however not enjoyable for Felicity, was the tough situation of not succeeding in stopping one of the nukes. She tries to save the Monument Point by hacking the destination over to Havenrock which takes out several lives, but nowhere near as many lives that would have been lost if the Monument Point had been nuked. I doubt that there will be much time for Felicity to get to deal with the emotions of it next week and in the finale. However, I do hope to see some effect be addressed because she didn’t look fine in that last scene after seeing what had happened. But then there is that one other problem that the team will have to deal with which is Damien Darhk at the end gaining more power through some sort of weird mystical thing-y. Honestly I had no idea what was going on other than seeing a giant head glowing whose energy went into Damien before it cut to the Arrow title card. It’s probably safe to say that it’s probably going to make things a lot worse for our heroes.

Overall, while some bumps along the way, “Monument Point” were a slight improvement from recent episodes as we get closer to the big showdown in the season finale. The thing between Donna and Quentin regarding his affidavit was decent because it reminded us about the tragic loss of Laurel, while also not really having much to do with the main arc. But as someone that likes seeing Quentin and Donna together, it was neat. Oh, how cool was that Brick vs Green Arrow fight? Pretty dope — can we have more Vinnie Jones on the show, please?

Team Arrow are forced to protect and work with The Calculator a.k.a. Felicity’s father in this week’s episode of Arrow.