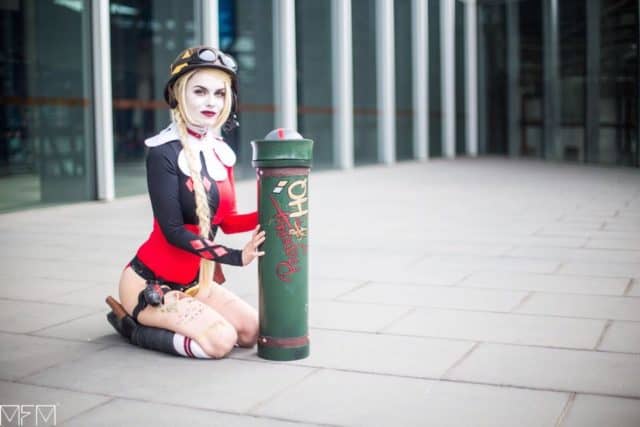 Cosplay has become a huge phenomenon in the last decade and quite honestly it’s become one of the more impressive attractions at conventions, even more so in some cases than the actual product, game, and movie reveals that are known to take place. People from all over the country, in fact all over the world, have been making a name for themselves for years now by adhering to the Cosplay life. A lot of them are so invested in that you might be amazed at just how much time and effort, and even money, they put into making their costumes. Given how realistic some of them look however it’s safe to say that it’s more of a passion than just a hobby.

Shiveejam is at this time one of the hottest Cosplayers out there and has proven herself a name worth remembering as she’s come up with some truly impressive outfits and getups. But how in the world did she get into cosplay in the first place? Here are a few things she was good enough to share about her experience.

She’s a fairly recent convert to the cosplay life.

As of 2014 she’d only come up with one cosplay identity, Lady Deadpool. Regardless of this however she nailed the character so well that her facial scarring and outfit were spot on. The look of Deadpool requires a certain attention to detail that is really important to nail the character just right. Since she began she’s taken on the persona of several other  characters such as Kim Possible, Domino, Harley Quinn, and even Valerian from the new scifi movie that just dropped in theaters.

Shivy, as she likes to be called, is a fierce advocate for cosplay.

Having taken enough criticism for her various roles she’s learned how to deflect any and all negative comments towards her passion and simply enjoy what she’s doing. Like any hobby or passion there are always bound to be haters that don’t understand it or find some reason to be jealous of talent they don’t have. Her advice to anyone wishing to join the cosplay community is to just jump in with both feet and ignore the haters. The cosplay community is generally protective and supportive of their own so long as one is fully invested in the life.

She really enjoys playing characters that are known to have a lot of attitude.

This would explain why she enjoys Lady Deadpool so much. Shivy has stated that her looks have always made her believe that she is more suited for the aggressive and challenging characters that have the definite sense of “don’t mess with me” character that she finds so alluring. This could be why she chooses characters such as Domino, Poison Ivy, Lara Croft, and several others that look anything but innocent. She plays them well to be certain and absolutely looks the part.

Shiveeejam is one of the hottest and most sought after cosplayers of the day and has been rocking it now for close to three years. Her level of dedication to the cosplay life has been absolute since her inception, with only one brief moment of hesitation in 2015. Since then though she’s become vastly popular within the community.

I'm so over waiting for my face to return to normal after my wisdom teeth surgery! I have so many ideas for things I…

So I guess I should start calling these things something? Cos-shopping? I don't know! BUT I TELL YOU! I AM HYPED THAT…

Posted by Shiveeejam on Wednesday, March 8, 2017

So September 13th, 2013 I stepped out into the world in all my scarred glory… What should we do for our 2 year anniversary guys?!

Posted by Shiveeejam on Thursday, September 3, 2015

Print store closes TONIGHT GUYS – 12 (midnight AEST) which is my time. This will be your last chance to get some of…

Posted by Shiveeejam on Wednesday, September 9, 2015

I just added this to my print store (link below), it's been a while since I added anything new (or stock in general -…