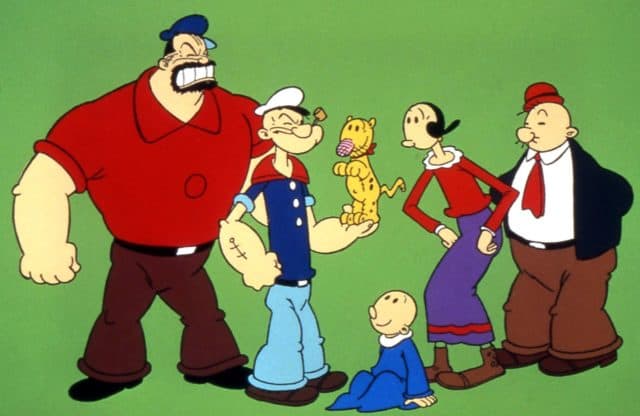 The actual reason why Popeye muttered under his breath is pretty simple. The voice acting and the animation were not on par with one another. The animation was done before the voice-acting was brought in, so this is why it seems like the old salty sailor is speaking and yet his lips aren’t moving, giving the impression that he might be talking under his breath. Somehow I don’t think today’s cartoons would get away with this largely because the fans might see it as lazy and the effect would be lost on those that have grown up with CGI being improved on a yearly basis. There might even be a good reason why we haven’t seen a resurgence of Popeye, and it could be that his many different mutterings would be hard to animate or perhaps hard to replicate as whoever did so would have to at least study Jack Mercer’s dialogue from the original cartoons to make it sound somewhat authentic.

Popeye might be an outdated concept however since if you can remember correctly he wasn’t the most PC character in the world. He wasn’t the worst by far, Bluto was much worse, but solving everything with your fists doesn’t seem to be what animators are going for unless their subjects are in fact physical in nature and are geared more for older children that can understand the distinction between reality and fantasy. You can argue that Popeye was geared for the same age group but the idea of eating spinach to become a tough guy and then simply clobber the bad guy isn’t something that people are wanting to see at this point, at least not in kid cartoons.

I suppose then that we should point out that some kid cartoons are still just as violent and don’t seem to affect children as much, but that wasn’t all that was shown in Popeye. Bluto was always after Olive, Wimpy was a mooch that would do or say just about anything for a hamburger and at times carried around his own grinder for mashing up whatever he could find. In one cartoon he’s actually seen stalking a duck to try and force the animal into his grinder to make a burger. Silly and cartoonish as it is there would be a lot of people that might have an issue with that in these days.

I recall growing up with this cartoon and thinking it was great. The good guy ended up winning more often because the bad guy thought that he was all that and couldn’t be beaten. The good guy got the girl, saved the day, etc., and everything was as it should be. That was before the world came crashing in and reminded everyone that Popeye was most likely a filthy-mouthed sailor that had a few different problems that no one wanted to discuss and wouldn’t so long as he was seen as a cartoon. In real life Popeye would likely be a crusty old salt that said whatever came to mind no matter how offensive it might be.

At least those are the depictions I’ve seen.