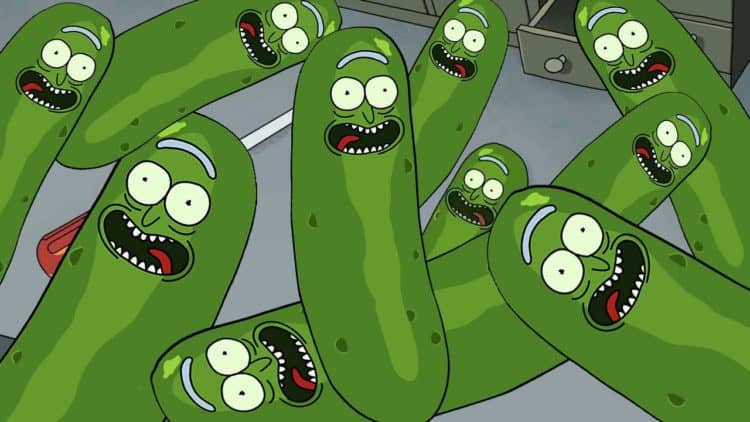 So, does anyone else get the feeling that Pickle Homer would try to eat himself to death without thinking about the ramifications? It certainly sounds like an option for a storyline, but apart from that, this is definitely one of the craziest ideas to ever come along since Rick is undoubtedly one of the least conventional cartoon characters to ever be created. It could be that he’s just someone that doesn’t conform to the rules and people can’t deal with that, but then again it would appear that in Rick’s mind there really aren’t any rules other than those that he makes on the fly and has to abide by if he wants to stay alive. But then there are so many Ricks out there that are of the same mindset that it’s easy to think that if one dies, and many have, that there’s a multitude that will pop up and take over simply because it would appear that there always has to be a Rick. But the idea to turn him into Homer was kind of different since the two series are about as opposite as they can be since both of them deviate from what a lot of folks would think of as normal more than a few times in an episode, while at the same time they operate on such different levels that this almost feels like something that a person did when they were bored.

Obviously, boredom does some strange things with people as anything with Homer Simpson as an add-on is going to feel a little strange given that he’s not exactly an upgrade in a lot of ways and is someone that a person might feel is kind of wtf moment when added into certain situations. There are a lot of different additions that could have been made, but Homer Simpson is one that might have caught a lot of people off guard in this situation, or it might be something that makes people simply stop and say ‘huh?’. In the realm of the animated series, there are a lot of things that can be done to throw people off since wait for it, it’s animation. There’s a lot of room for the unexpected and when it comes to people being bored or just trying to come up with ideas this is what tends to happen sometimes since like it or not, creativity doesn’t know a lot of boundaries and so long as there’s permission being given it’s easy to think that people are going to go outside the limits of what some believe is feasible.

The Pickle Rick idea is one that took off without too much prompting, and it’s likely because Rick and Morty was already a popular series and people had come to expect such things from it. The animated series is something that went so far above and beyond anything that had come before that trying to top it is going to be insanely difficult if at all possible seeing as how the show just keeps raising the bar in one way or another. The Pickle Rick idea is something that people still allude to every now and then and reference when they feel the need on social media since there are a lot of different ways that it can be used. Overall, the idea is something that carries a lot of different possibilities since one can just imagine how many ways the idea can be taken and how many different people might come up with something different for the character, and how to use it in a story. Homer probably wasn’t the first choice since there’s such a huge difference between Rick and Morty and The Simpsons no matter how much people want to argue for the similarities. But it’s not the worst thing that could ever come from a swap between the two, and it’s not something that would be so out of bounds that it couldn’t work at all. But trying to get the image of Pickle Homer eating himself is kind of difficult given that it’d be one of the more likely scenarios.

In the realms of animation though, pretty much anything is possible since if it can be imagined and drawn, then it can be used to one extent or the other. Whether people are going to think it’s worth looking at is a different point altogether, but it’s fair to state that a lot of people would probably enjoy this simply because it takes two animated series that people tend to enjoy in a big way and smashes them together in a way. That kind of thing has been able to entertain people quite a bit throughout the years, so it’s easy to say that it would do so in this case as well.