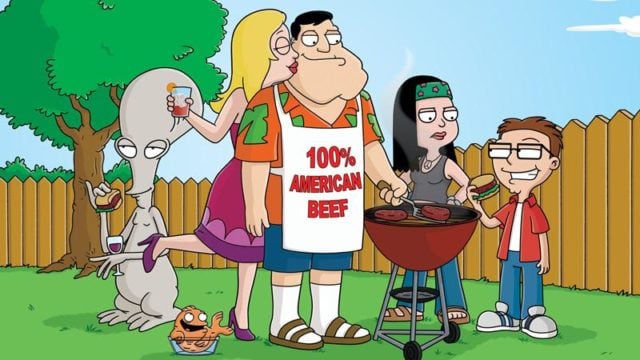 Would you believe that this cartoon has been on the air for 14 seasons? The first episode premiered on FOX in 2006. After 11 seasons, FOX decided to drop the show. Fortunately, for fans, TBS picked it up right away. Now, 226 episodes into the series, Roger’s disguises continue to be one of the best parts of the show. Who can forget Ricky Spanish, Legman (with Steve as Wheels), and Jenny Fromdabloc?

Family Guy, which premiered way back in 1999, just wrapped up its 15th season. While what is probably the funniest animated show on TV has been canceled twice, FOX keeps bringing it back. And, why wouldn’t they? There’s no better way to end the weekend that seeing what ridiculousness Peter is going to get into, listening to Stewie’s over the top comments, and of course, seeing what Brian’s up to In the upcoming season, the show will mark its 300th episode.

What originally aired as a mid-season replacement on March 27, 2005 just wrapped up its 13th season and 293rd episode on ABC. We’ve seriously been watching the doctors and interns at Seattle Grace Hospital work through some pretty twisted storylines for more than a decade. In that time, we’ve cried alongside Meredith after McDreamy’s death, cheered as Callie and Arizona got married, and sighed as baby Zola took her first steps.

When Law and Order: SVU premiered on September 20, 1999, Mariska Hargitay was a 35-year-old single woman. Now, 420 episodes later, she is a 53-year-old married mom of three. Over the past 19 seasons, we’ve watched as Olivia’s partners have come and gone (Stabler, where are you?), saw Olivia’s rise through the ranks to Lieutenant and Finn to Sergeant, and watched plenty of episodes that were ripped straight from the headlines. So far, SVU has tackled scandals based on Kobe Bryant, Anna Nicole Smith, Michael Jackson, and other top stars. Which celebrity will be next?

Who knew that Criminal Minds, which premiered on September 22, 2005 had been on the air for 12 seasons? That’s right. You’ve been watching the FBI’s Behavioral Analysis Unit profilers fly around the country and solve horrendous crimes for a mind blowing 277 episodes. During that time, we’ve seen profilers come and go, though a few have stuck around from day 1 and others have returned after a brief break. Despite some major cast changes in the last year (Goodbye Hotch and Derek, the show continues to go strong.