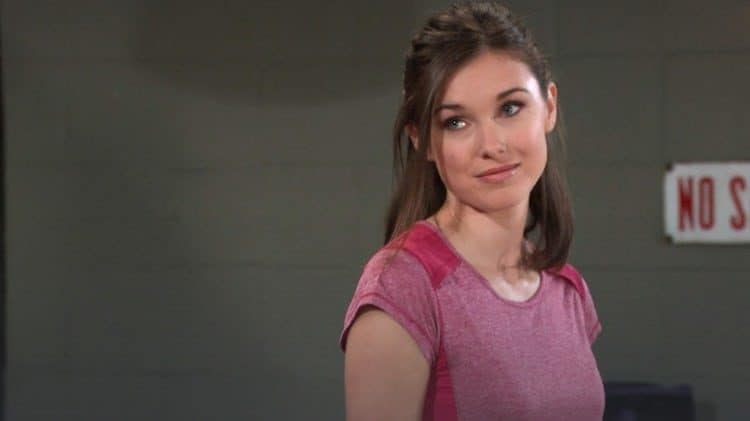 General Hospital fans are learning more and more about Willow as the days go on, and we aren’t sure how we feel about her. We get that she’s had a tough life, but we aren’t sure how she is getting through her situation that is ongoing in the moment. She’s given up a baby. She’s made some enemies. She’s done things in her own life that make her feel horrible about things, and she’s not that good at other things going on in her own life. But, she’s someone we need to get to know more about. She’s got things going on in her life we just don’t understand, and that’s all there is to it. For now, though, we know that we can see this situation through, and we can learn more about her.

For a long time, no one knew much about her at all other than the fact that she is a teacher who is looking to do things in her own manner of speaking. She sent home a letter to Franco and Liz about Aiden, and that’s how things got started for them. They had to adjust their own lives to focus on what was going on in his life, and they got to know her as a result. But, they did not know at the time that she gave her baby up for adoption to Brad and Lucas or that she was part of the DOD. Her mother is part of the DOD. Her baby’s daddy is Shiloh, and we didn’t know any of this for a long time. She was a mystery, and she’s still kind of a mystery to all of us.

She’s the Subject of Rumors

There are a lot of rumors about Willow, and we don’t know which ones are true. Is there a chance she is really the daughter of Nina that she’s been looking for? And is there a chance that this will come out and cause Sasha to have to do some explaining about the way she’s been living her own life? Is there a chance we might see things improve for them, or that we can see things get worse for anyone else? And, do we know the truth about this? There have been some serious rumors that she is the daughter of this young woman who is not going to find her way home without knowing the truth. That she was given to Harmony, her ‘mother’, when she was born to Nina and no one knew. Is this the truth? Nina doesn’t know, and there is a lot going on we cannot say for certain, but this might be the truth.

Chase Cares for Her

She seems to be making some strides in her friendship with Michael, but she and Chase have a big thing going on between them. They have to get their life in order, and they have to focus on things that aren’t theirs to focus on. He had to arrest her when she refused to tell the judge where her son is when he ruled that it was all right for Shiloh to get his own son back. She refused, Chase had to arrest her on charges of contempt, but he begged her to please tell the truth. She told him that Shiloh killed her own father, and Chase decided that he had to agree with her refusing to share the whereabouts of her son with the court, and he is trying to handle it.

Michael is Helping Her

We know that he is friendly with her, and we know that neither of them have a clue that this baby they are protecting is not her baby. They don’t know that her baby died and that Nelle agreed to trade the babies so that Brad could bring home a live baby to Lucas and that Nelle could have one final act of revenge on the family she hates so much. He is helping her keep this baby hidden, and they have no idea that this baby is actually his own baby and it’s not her baby. This will be good when it comes out, we are sure.