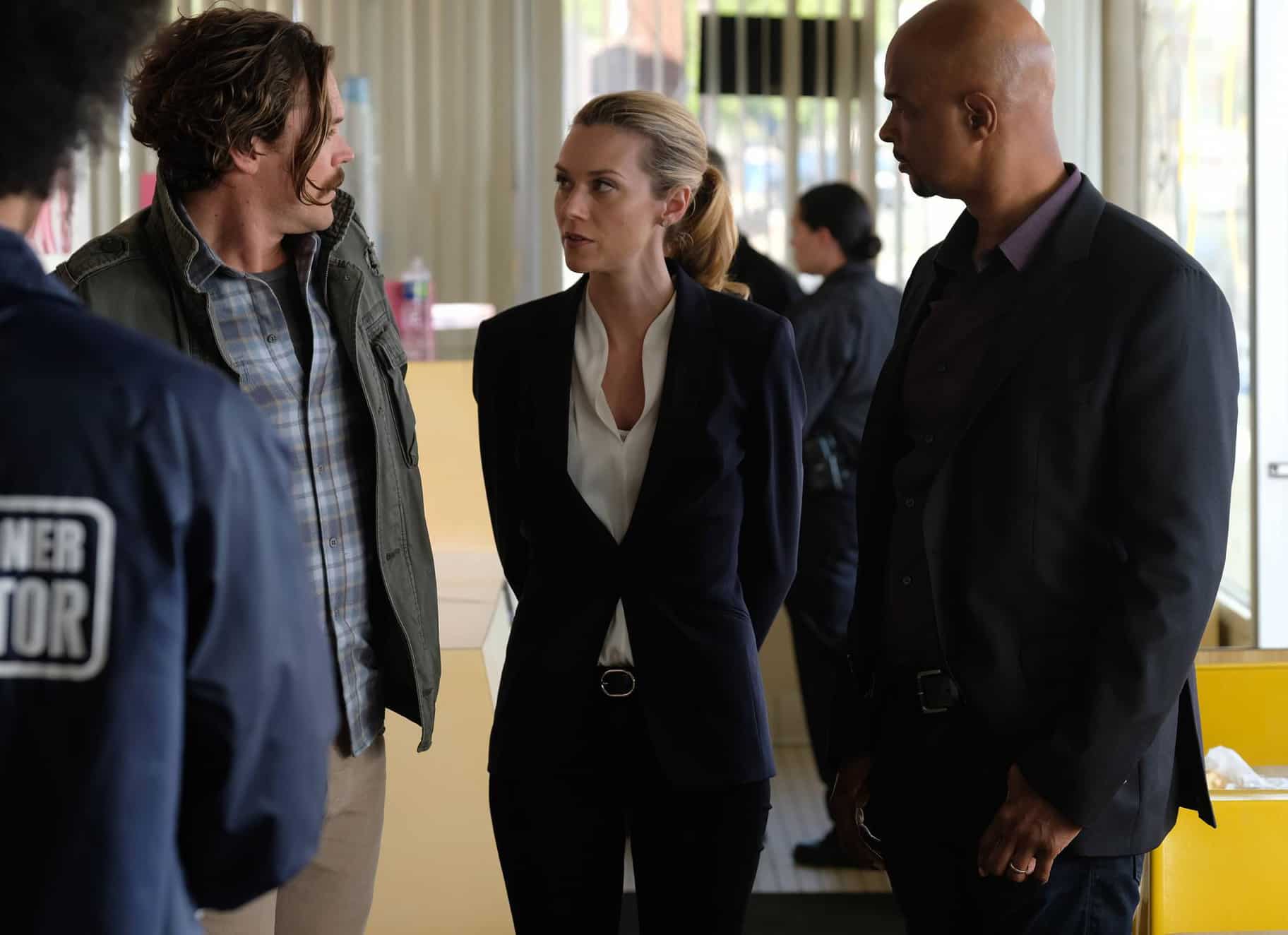 On this Week’s Episode of Lethal Weapon, Riggs and Murtaugh work with the DEA to protect an Ambulance Chaser Lawyer from the drug Cartel.

When the episode opens we see Leo Getz is meeting with his client Flaco Ruiz at a donut shop to negotiate a deal with the DEA, but while he is in the bathroom his client and the DEA agent are shot and killed and he runs away.

When Riggs, Murtaugh and Scorsese get to the crime scene they realize that Flaco Ruiz was the target.  They meet with DEA Agent Palmer who tells them that Flaco Ruiz came to the DEA with information on the Cartel.

Back at the station Riggs and Murtaugh talk to Captain Avery and Agent Palmer.  Agent Palmer tells them that the DEA got a tip that Flaco Ruiz could identify a major player in the Flores Cartel’s money laundering operation.  But she would not tell them who.

After Bailey looks up the most recent major car accidents, Riggs and Murtaugh find Leo Getz at the hospital handing out his card to people who were hurt.  They question Leo about what happened at the donut shop.  He tells them that he was in the bathroom when the shots were fired so he didn’t see anything and that Flaco Ruiz was only his client for the day.  He met him the morning they met with the DEA Agent.

Riggs decides to use Leo as bait and let the Cartel come after him instead of taking him to Agent Palmer like originally planned.  Riggs and Murtaugh follow Leo to a taco stand that is a front for the Cartel, where he ask for a phone so that he can let the head of the Cartel know he didn’t see anything and won’t tell anyone.

Things take a turn when Agent Palmer shows up to talk to Leo and announces she is from the DEA.  The guy behind the counter ( who we find out later is named Pablo) warns the Cartel that Leo is working with the police and a few minutes later they come by and attempt to kill him.

When they get back to the station Riggs, Murtaugh and Agent Palmer all have a meeting with Captain Avery.  Agent Palmer is upset because Riggs and Murtaugh did not tell her the plan but she tells them that the major player the DEA is trying to catch is named The Architect.

He designed and runs the entire money laundering operation in LA.  Riggs and Murtaugh go and talk to Leo who gives them information that they can use to get Pablo to talk.  Pablo tells them that he has never actually seen The Architect, no one has but that everyone is mad that Agent  Palmer wasn’t killed.

Riggs quickly realizes that Leo wasn’t the target after all but in fact it was Agent Palmer.  She is able to turn around just in time to get into her car and was saved by her bulletproof vest. Back at the station Riggs and Agent Palmer interrogate the man who shot at her.  He tells her that he has never seen The Architect and that he got a text on a Burner phone at the crack of dawn with orders to go kill her.

Agent Palmer and Riggs go through the financial files of the ten businesses she filed subpoenas against that have ties to the Cartel because she believes one of them is a front for The Architect.   Meanwhile Murtaugh stays in a motel with Leo to make sure he is safe

The next morning when Murtaugh comes into the station he helps Riggs and Agent Palme,r who have been there all night, look through the files.  He finds in one of the files Leo’s number and realizes that one of the businesses called Leo the night before the donut shop was attacked.

Leo says the only person that called him that night was Flaco Ruiz.  Agent Palmer realizes that Weyburn Advisors is The Architect’s cover business and that The Architect’s real name is Stanford White.  Agent Palmer tells Riggs and Murtaugh to wait until she gets a warrant before they arrest him.  When they go to his office they find him dead in the elevator.

At the same time Leo calls to tell Murtaugh that guys from the Cartel took Agent Palmer in an ambulance and that he is following them.  (I thought this was really funny) Murtaugh and Riggs tell him to stay put until they get there but he doesn’t listen and ends up getting shot at.

When they get there Murtaugh goes to save Leo while Riggs jumps onto a flying helicopter to save Agent Palmer. (I thought this scene was really awesome to watch) Agent Palmer and Riggs jump from the helicopter and fell through the roof of the abandoned gas station.

Back at the station Murtaugh says goodbye to Leo and Palmer.  Agent Palmer asks where Riggs is and Murtaugh tells her that he has not seen him and she says to tell him goodbye. Murtaugh finds Riggs down in the Morgue hiding because he’s afraid to talk to Palmer.

At the end of the Episode Agent Palmer comes back to get the badge of the DEA agent who died earlier in the episode and Riggs decides to walk her out.  When Scorsese is leaving to go home he almost catches Riggs and Palmer kissing in the elevator.

The secondary storyline throughout this episode is that Trish thought she was going to make managing partner at her firm.  When she doesn’t she suddenly decides to quit which worries and upsets Roger.  After getting advice from both Leo and Riggs he changes his mind and decides to be supportive of Trish.  At the end of the episode when Roger goes with Trish to clean out her desk they both see Trish’s Face on the Side of a bus with Leo and they both say they hope Leo has a good lawyer.

Overall I thought this Episode was mediocre at best.  I did not like the character of Leo at all.   I thought that he was really annoying but I did enjoy the interaction between Riggs and Palmer..
.

Lethal Weapon Season 1 Episode 15 Review: "As Good As It Getz"

On this Week’s mediocre Episode of Lethal Weapon, Riggs and Murtaugh work with the DEA to protect an Ambulance Chaser Lawyer from the drug Cartel, and Trish makes a big decision.