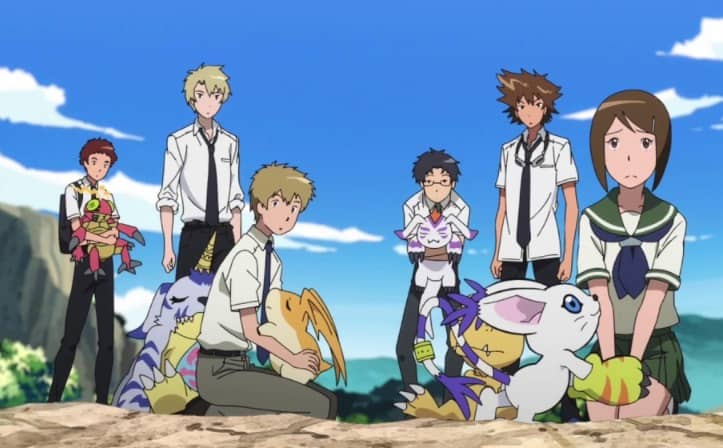 Digimon Adventure tri. is a series of six anime movies released for the Digimon franchise. It is meant to serve as a celebration of the 15th anniversary of said franchise, which explains why the movies have been designed for a fair amount of appeal for people who remember the earlier Digimon anime series. Here are 10 things that you may or may not have known about Digimon Adventure tri.:

1. Follows Up on Digimon Adventure

Given the name, it should come as no surprise to learn that Digimon Adventure tri. is a follow-up to Digmon Adventure and Digimon Adventure 02. Both anime series were set in the same timeline, which explains why there was a fair amount of overlap between their central casts.

2. Features Casts of Both Series

Unsurprisingly, Digimon Adventure tri. features the casts of both series instead of being limited to the cast of a single one. After all, the two anime series were broadcast within a short time of one another, meaning that if someone watched one, chances are good that they were aware to some extent of the other. Something that was particularly true because of the connections between the two series.

With that said, Digimon Adventure tri. featured one new Digidestined as well. In short, the character is a teenage girl named Meiko Mochizuki, whose most notable characteristic is an extreme level of social awkwardness. Of course, the existence of another Digidestined means the existence of another partner Digimon as well, which in her case, would be the cat-like Meicoomon.

4. Centered on a Virus

A fair amount of the plot for the six movies that make up Digimon Adventure tri. is centered on the existence of a mysterious virus that is causing infected Digimon to become hostile. Suffice to say that this is a serious problem considering the kind of power that even minor Digimon can throw around.

5. Centered on Growing Up

Speaking of which, the six movies are set no more than three years after the end of Digimon Adventure 02. Due to this, it is perhaps unsurprising to learn that Digimon Adventure tri. focuses a fair amount on the responsibilities of growing up, which is a very relevant topic for a number of the central cast.

In recent times, a lot of Japanese animated projects have been getting simultaneous releases in non-Japanese markets, which is a sign of just how popular anime has become in those non-Japanese markets. In the case of Digimon Adventure tri., the movies were streamed outside of Japan with Japanese dubs but suitable subs on the same days as their domestic release.

7. The Names Can Get a Bit Confusing

Unfortunately, the names can get a bit confusing. This is because when Digimon Adventure and Digimon Adventure 02 were brought over to North America, their characters received new English names because of Saban. The problem is that while the subs use the Japanese names, the dubs use the English names, meaning that keeping track of who is who can take a bit more effort than usual.

8. A TV Series Was Considered

Digimon Adventure tri. wasn’t always going to be a series of six movies. Instead, the people behind it considered doing a new anime series to be broadcast on the TV but eventually decided to do the six movies instead. With that said, it is interesting to note that the movies were streamed outside in Japan in episodic format anyways.

9. Got a Stage Adaptation

Different cultures have different ways of doing things. As a result, it is interesting to note that Japan has been known to do stage adaptations of anime and related projects that prove to be popular enough. Due to this, there was a stage adaptation of Digimon Adventure tri. that happened in 2017.

10. The Series Is Complete

For people who prefer not watching series until they have been completed because they don’t like waiting between separate installments, they will be glad to know that Digimon Adventure tri. has been completed by this point in time. In fact, the English version of the sixth movie came out in September of 2018 for people who prefer the dub rather than the sub, meaning that this happened relatively recently.