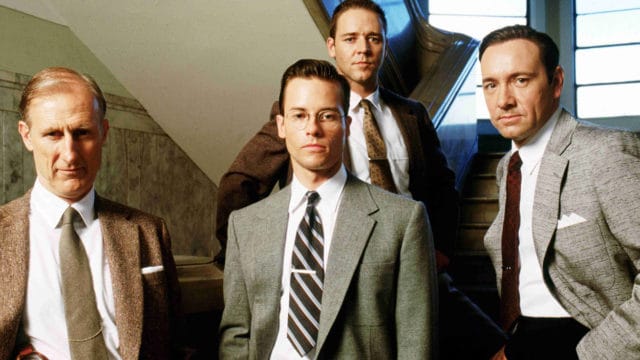 Released 20 years ago, L.A. Confidential has been called one of the best movies ever made by many people and still stands out today as one of the more provocative pieces of film history ever produced. The twisting and turning mystery is one that had a lot of fans guessing right up until the end what was going to happen while keeping people entertained with each passing minute. While the author of the book that inspired the movie didn’t really agree with every single scene he was still impressed at how well the move adaptation had done to galvanize his work.

But of course as it is with all movies, there are a few things that most people didn’t know.

10. Some of the events in the film are true.

A few of the events in the movie actually happened in history like the Christmas Eve police riot and even the fact that Lana Turner, a notoriously popular screen goddess of the time, was dating a well-known mobster. Score one for Hollywood when it comes to realism.

9. The director wanted two little-known actors for the parts of White and Exley.

He didn’t want audiences to know what to expect as would have happened if he’d cast well-known actors into the lead roles. This way he could at least surprise a good number of people by bringing in virtual unknowns that most people couldn’t predict.

8. Bigger names were drawn for the supporting roles.

Names like Kevin Spacey and Danny DeVito were brought in to fill in the supporting roles and round out the cast. They were there to make the leads look good.

7. Kim Basinger was older than each of her love interests by more than a decade.

She was 14 years older than Guy Pearce and 11 years older than Russel Crowe. While that didn’t happen all that often in the movies the dynamic between the three of them made it work so that the age gap didn’t matter.

It wasn’t a big budget film at all but the good thing was that the scouts for the movie managed to find many places in LA that had remained largely unchanged since the 1950’s, so a bigger budget wasn’t really needed.

5. The author gladly gave up his rights to the film.

That’s about it. The author took the money and gave up his rights. When you think about it now he could have stood to make a much bigger payday if he’d had some faith that his book could actually be adapted to the screen.

4. The director went behind the back of his supporters and entered the film in the Cannes Film Festival.

The Warners, the people backing the director, didn’t think that the film would be well-received at the festival and refused on the grounds of not wanting it to be heavily criticized. When the director defied them however the film was met with little more than praise.

3. The film was nominated for 9 Oscars.

It won two Oscars but lost everything else to Titanic, which was a big hit that year.

2. Kim Basinger was only onscreen for about 15 minutes of the film.

She had the least exposure of anyone that was featured in the film but was the biggest star there at the time, so she received a good deal of the billing.

1. A TV series of the film was attempted.

The pilot never got picked up despite the great cast that was assigned to the show.

How many facts did you recall?