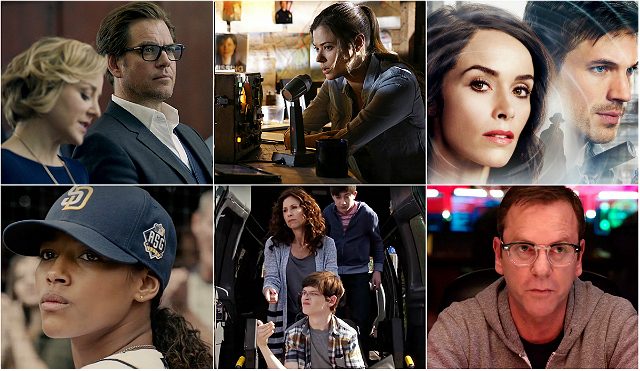 Every fall the main broadcast networks – ABC, CBS, CW, Fox, and NBC – introduce a ton of new shows they hope viewers will love. Well, it will be September before you know it and, per usual, the broadcast networks have a crop of new shows mixed in with the current ones. In fact there are forty-three new scripted shows premiering over 2016-17!  I’ve been going over my current, “have to watch” schedule, and trying to decide which new fall 2016 shows I want to add to it – and to my DVR.

Obviously, no one person is expected to watch all 43 of these new shows.  Even as reviewer, you may prescreen all of the pilots, but there’s just no way you can watch everything on a weekly basis.  A standard DVR lets you record two shows, so with five networks (remember, this isn’t even including cable) you still have to choose.  Besides, there are only so many hours in a  day available to watch TV!  (Not to mention write about it!)

ABC has 9 new shows this season: 5 dramas and 4 comedies. Out of these there are 5 that make the list – 2 dramas and three comedies.

ABC already has a slew of successful comedies (Modern Family, The Middle, Blackish) and more!  With these three being added it looks like they’re going to be the goto networks when you want some laughs!

You can learn more about Designated Survivor – and even check out a sneak peek – at www.abc.go.com.

CBS has 8 new shows: 5 dramas and three comedies. Three of their dramas make the list.

From executive producer Dan Fogelman (“Crazy, Stupid, Love.”), PITCH is the dramatic and emotional story of GINNY BAKER (Kylie Bunbury, “Under The Dome”), who becomes the first woman to play Major League Baseball — under the glare of a white-hot media spotlight. (Fox)

There are so many reasons to be excited about Pitch!  For me, it’s the tagline:

A true story on the verge of happening.

In 2014 Mo’Ne Davis was the 13-year-old girl who was the first girl to pitch a shutout in the little-league world series.  As much as she loves baseball, what she talked about often was basketball and her goal for playing in the WNBA.  The current reality is that there’s no place for Davis to go if she were to focus on the baseball track.  Fox’s character Ginny looks a lot like a grown-up Mo’Ne Davis….  As most things start with imagining what it would be like,  Fox’s Pitch is a hopeful sign of someday this being different.

*This means the season will be a closed-ended story like, say the American Horror Story series on FX.  Back in the day they’d call things like this a “mini-series.” Now they pick a theme (like horror, crime or infidelity), make that the series title, and do a new mini series based on that theme every season.

The CW only has three new shows, two of which have peaked my interest.  (I’m not counting Supergirl as a new show.  All it did was hop from CBS to the CBS co-owned CW. )

This a dark version of the Archie comics, but it’s no comedy.  The story synopsis has it starting with “the town reeling” from a popular student’s murder!  The general buzz keeps referring to the David Lynch classic, Twin Peaks when talking about Riverdale.

While it has a lot of cool hype, there’s no trailer for it.   For me, when a studio doesn’t want the public to preview something it’s immediately suspect.  However, it could just be behind schedule.  The cast was at the 2016 San Diego Comic Con.

In this reimagining of the film, a female police detective in 2016 discovers she is able to speak via a ham radio with her estranged father (also a detective) who died in 1996. They forge a new relationship while working together on an unresolved murder case, but unintended consequences of the ‘butterfly effect’ wreak havoc in the present day. (Youtube promo blurb)

[youtube https://www.youtube.com/watch?v=OQK-DChpn1M?rel=0]
Aside from the film it’s based on, Frequency also reminds me a bit of a 2012 NBC show called Awake.  The idea of these parallel worlds where saving one person you love means the loss of  another was, and is, compelling.  Of course, the movie Frequency took this much further.  Another thing about this take on the movie that I like is the complicated father/daughter relationship.

The movie version of this show is a Saturn award-winner, which, in the world of sci-fi is the highest honor given.  Basically, if you’re into that genre, you’re thrilled about this show!  Even if you aren’t, the mystery and relationship dynamics of the family should be very compelling.  It’s definitely worth checking out!

NBC Has 12 new shows – the most of all the networks.  They’ve got three dramas in the sweet sixteen.  Considering how many other great dramas are over there, (Blindspot, The BlackList, the Chicago series…just to name a few.) they may be the drama network the way ABC is shaping up as the home for comedy.

So, that’s my sweet 16 group for the 2016-17 television season!  I’ll admit, I made it a little easier for myself by listing the top 16 by network.  For the shows premiering this fall, I decided to up the ante!

The following top ten list of fall 2016 TV Shows are ranked by interest from low to high.

There you have it.  These are the 10 new fall 2016 TV shows that seem the most promising.  Come February 2017 there’ll be six more great shows.   Have no worries though.  It’s likely those six shows will be switching places with another series (like Star does for Empire), or coming in where the NFL games used to be.  Your DVR can handle it!